Linking up the city

East side: An aerial view of the Hillview Interchange.

THE link connecting the east and west sides of Kuala Lumpur in the form of a direct tolled expressway is in the midst of construction and will be ready by the end of 2016.

Known as the Duta-Ulu Klang Expressway (Duke) 2, it would feature the Sri Damansara Link (SDL) and Tun Razak Link (TRL) which would connect with the existing Duke 1.

Right now, Duke 1 connects the eastern side of Kuala Lumpur near Taman Hillview and Hulu Kelang to Jalan Tunku Abdul Halim (formerly known as Jalan Duta) but the SDL would enable drivers to get to the MRR2 near Menjalara, Kepong on the western edge of Kuala Lumpur.

Spanning 7km, the SDL would have one open toll plaza, two interchanges as mentioned above as well as a pair of directional ramps near Desa Park City. 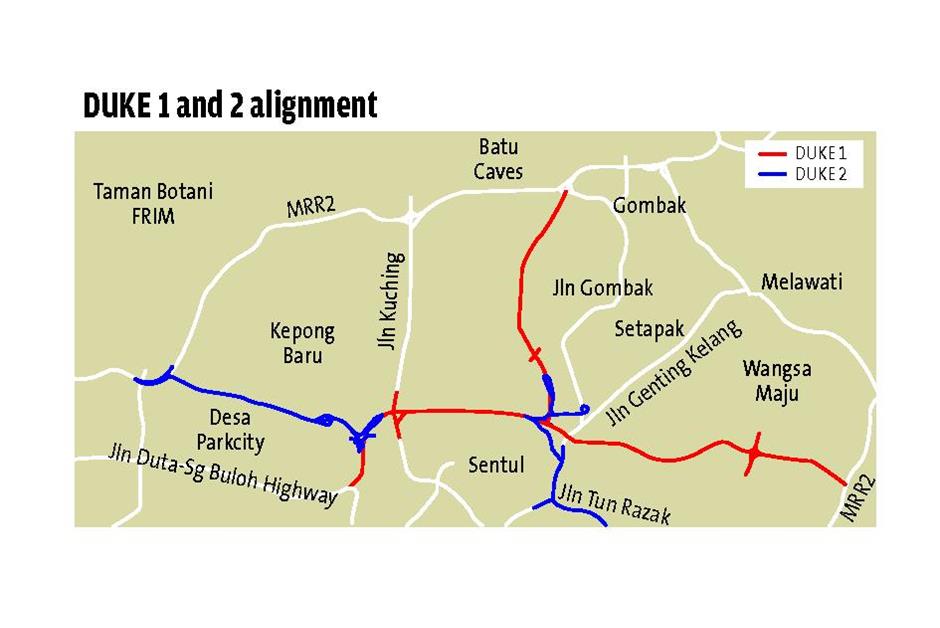 As for the 9km TRL, it would link up with Duke 1 through the Sentul Pasar interchange as well as the Karak Link via the new Gombak Interchange, a new trumpet interchange providing access to Duke 1 from Jalan Gombak and Jalan Genting Klang.

The Karak Link, a part of Duke 1, leads to Gombak which is at the northern edge of Kuala Lumpur.

Ramps along the TRL are located at Jalan Tun Razak, Jalan 9/48A, Taman Sri Setapak and Jalan Gombak.

According to North-East (KL) Highway Consortium Sdn Bhd director Chua Soo Kok, Duke 2 is meant to provide an alternative route that connects the MRR2 and MRR1 along with Duke 1. “We also aim to ease city traffic congestion particularly at Jalan Tun Razak as well as the entry and exit points of the expressway,” he said.

Using the Duke 2, one only needs to travel 22km from the Menjalara interchange to get to Jalan Tun Razak as opposed to between 27km and 35km using various routes.

Chua also said that the Duke 2 will be a dual three-lane carriageway while the toll charges are pending a Cabinet decision.

The project was mostly being built on government land and did not affect any existing or approved residential areas.

Duke 2 was being developed by project concessionaire Kesturi, a fully-owned subsidiary of Ekovest Bhd, for RM1.1bil and about 23% completed, according to Ekovest managing director Datuk Lim Keng Cheng.

He also talked about the EkoTitiwangsa and EkoPark Place development by the Gombak river which the Duke 2’s TRL would pass through.

“We proposed this as an integrated development which eliminates having a ‘barrier’ — in this case, having the Duke 2 running between them. “The public will be able to freely walk between these two developments,” he said, adding that the projects are being done on a standalone basis.

The project marked a different approach to developments in view of land scarcity in the city.

EkoTitiwangsa consisted of three residential blocks that are 36, 40 and 50-stories high as well as a commercial area for food and beverage outlets along the riverfront boardwalk, which was expected to face a vibrant river that is part of the River of Life project.

EkoPark Place, on the other hand, was an 80-storey class A corporate office tower that would be connected to the other project via a shopping mall.

In Kuala Lumpur, train lines run through buildings and various other developments around the globe had set an example for this project’s model.

As such, Lim did not foresee any major safety, social or environmental issues that could not be addressed.

EkoTitiwangsa was expected to launch in the second quarter of this year while EkoPark Placewas expected to be launched by year’s end, depending on the integrated development proposal finalisation.

The former project, which was already open for registration, had received a lot of public interest although the expected date of completion was in 2018.

“The project’s approximate gross development value is RM560mil while for EkoPark Place, it is estimated to be RM320mil.

“This does not include the potential shopping mall that will connect the two developments,” he said.