Liverpool will be mighty hard to beat

LIVERPOOL are firing on all cylinders and are red hot at the moment.

Having soundly beaten Everton 4-1 at Goodison Park in midweek in the Merseyside derby, the Reds have notched up 12 goals in their last three games.

It almost seems like Liverpool are scoring goals for fun, which hopefully will continue as they turn their attention to Wolverhampton Wanderers at the Molineux Stadium next.

The chief contributor to the goal rush over the last three matches was Diogo Jota with four goals, while Mohamed Salah got three.

The Portuguese striker just knows how to pop up at the right time and be in the right place.

He has taken his tally to eight league goals this season.

His latest against Everton, which was from a tight angle, truly shows his finesse as a potent goalscorer.

Just do not bet against the Portuguese to score against his former club again — like his winning goal in March.

Salah, who was placed seventh on the recent Ballon d’Or list, also continues to amaze with his own run of form and remains top of the league’s goalscoring chart this season with 13 to his name.

While both their goal-scoring prowess is a boon for Liverpool, it is also down to the creators of the chances that lead to the goals.

Since returning from injury, Andy Robertson has been playing like a man possessed, chipping in with three assists, which included two against Everton and one against Southampton last week.

The Scotland captain, who missed a few games due to injury earlier this season, knows he cannot put in any downtime with Kostas Tsimikas waiting in the wings.

Fellow full back Trent Alexander-Arnold has also weighed in with three assists in the last three games, taking his tally to seven.

In contrast, Wolves have only managed one goal in their last three league matches.

Their inability to convert chances will be a concern for head coach Bruno Lage, as Wolves have not won at home against the Reds since 1981.

After hosting Liverpool, they will face three other tough matches against Manchester City, Brighton & Hove Albion and Chelsea before Christmas.

Despite Wolves’ problems, Jurgen Klopp will need to keep his team motivated and not allow complacency to set in.

A win, even if it is a narrow one, against an unpredictable Wolves side can prove vital as Liverpool continue to chase down league leaders Chelsea.

Klopp will also hope to have everyone fit and injury-free as the Reds navigate a busy December schedule. 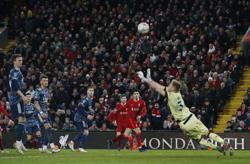