100 years of Korean beauty in under 2 minutes

The '100 Years Of Beauty: Korea' video sees the evolution of women's hair and makeup styles in Korea. Photo: YouTube

The politicising of makeup throughout history has been brought to light once again with the release of the latest instalment of the stunning 100 Years Of Beauty video series, focusing on Korea.

Starring model and stylist Tiffany Lee, episode four of the 100 Years Of Beauty series filmed by Cut.com explores Korea's complex relationship with female beauty trends. A split screen juxtaposes the trends in North and South Korea from the 1950s onwards, following the division of the country after World War II.

The time-lapse clip shows Tiffany modeling the key trends for each of the past 10 decades, beginning with her sporting an elaborate updo held in place by an oriental hairpin with rouged lips in the 1910s.

Minimalist makeup, a string of pearls and a chic chignon herald the arrival of the 1920s, while shorter pinned-up hair and a jaunty Florentine hat encapsulate the glamour of the 1930s.

The 1940s see a much more relaxed look, with hair worn loose and wavy and makeup focusing on classic red lips and defined brows. Yet come the 1950s, the screen splits dramatically to represent the division of the nation into The Democratic People's Republic of Korea (North) and the Republic of Korea (South) in 1948.

While blusher, eyeliner and a chignon remain fashionable in the South, a bare face and communist cap becomes the look du jour in the North.

A much more glamorous aesthetic heralds the arrival of the swinging 1960s in the South, with a long wavy bob and sultry eye shadow contrasting with a red headband and slick of lipstick in the North. Just a Florentine hat and bright red lipstick for Korean ladies in the 1930s. Photo: YouTube

A wide-brimmed hat marks the 1970s in the North, while Lee's Southern look is bohemian and carefree, featuring hoop earrings and a tie-dye headband.

Punk beauty is in style for the 1980s, with a mowhawk updo, bright pink eye shadow and bold lipstick setting the tone in the South, while things are more sedate in the North. For the 1990s, Lee adopts a Harajuku-style hairdo and a pared-down chignon.

The new millennium sees a more polished look come into fashion in the South, featuring loose hair, smokey eyes and glossy lips – in contrast to the North, where the return of a Communist hat signifies an austere aesthetic. By the time we reach the current decade though, Lee is sporting a glam blow-dry for South Korea and a pretty headband for the North, perhaps signifying change to come.

The series has previously explored the last century of US and Iranian beauty trends. — AFP Relaxnews 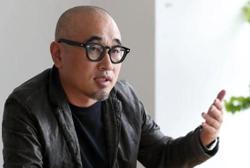