The art of life

A retrospective exhibition salutes an artist who, for almost 60 years, was also a sculptor, designer, educator, administrator and art historian and commentator.

A LIFE and achievements that can be told entirely on canvas! Few artists can boast this, what more a career that spans more than 50 years and in various art-related fields.

These are part of some 300 works comprising paintings, drawings and sculptures from various collections assembled in what is the most thorough historical overview of the National Art Laureate artist yet, called Syed Ahmad Jamal: Artist, at the National Art Gallery.

The exhibition will be opened by the Yang di-Pertuan Agong, Tuanku Mizan Zainal Abidin, on Tuesday. It is a fitting tribute to the artist who celebrated his 80th birthday on Sept 19 and who has hugely impacted Malaysian art as artist (paintings, drawings, sculptures, cartoons/illustrations), designer (stage sets and logos), administrator-overseer, educator-academician, scholar/author and writer (bilingual).

A 616-page commemorative book, Syed Ahmad Jamal: Artist, aims to set the benchmark for art publications here. It attempts to reassess Syed Ahmad’s varied roles and, for the first time, his works are analysed technically and as collections, statistically and in a scholarly way. 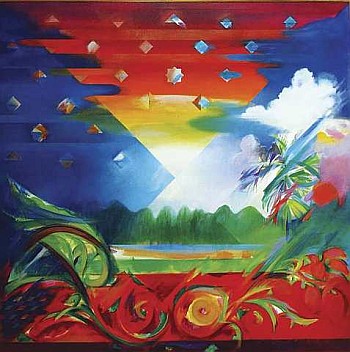 Syed Ahmad’s landscape and (early) portrait paintings were stamped with his personal input and style, with traces of analytical Cubism and Abstract Expressionism, before his art matured into a kind of sublimal Symbolism.

His Abstracts are marked sometimes by Jawi and later, Naskh calligraphic strokes and gestures (Naskh is a cursive Arabic script), while his Gunung Ledang vistas and grand geometric designs of later years are infused with Islamic elements, panorama, grandeur and beauty, even when the subjects are dire and dreadful.

Some of his works, evident from his seminal book of Malay art forms, Rupa dan Jiwa (Form and Soul, 1992), are lodged in the spirit and ethos of Malay artefactal traditions.

Because his works also occasionally touch on socio-political and humanitarian issues of the day, like the Bosnian and Palestinian conflicts (?Palestine, 1983), nuclear proliferation (8.15.6.8.45, 1988), environment (Endau-Rompin) and the Reformasi street protests, his art also resonates with the spirit of the age, and marks historic and historical events in the country.

On the starting point of his painting life, Syed Ahmad prefers to skip the early years and even his study stints at the Birmingham School of Architecture (1950) and the Chelsea School of Art (1951-55) in Britain. Three notable works, all done in 1956, marked this period, namely Battersea Park I and II and Duel in the Snow (inspired by the epic battle between Hang Tuah and Hang Jebat on morality and justice).

His opening gambit is Pohon Nipah (1957), for the profound effect the nipah palms had on him on several levels, upon his return after six years in Britain. He recalls the sturdy topography of nipah palms standing in the soft mangrove mud like stanchions against soil erosion, with their fern-like palms outstretched, glistening warrior-like in the sunlight. It was a common scene as he shuttled between Johor Baru and the Batu Pahat High School, where he was teaching then.

“It was a mileau so opposed to that of the mild, mellowed, cultivated civilised landscape or landscaped or garden countryside of England. It stood firmly, as if it was enjoining the earth, space and the sky. The serrated blades of the palms shot up, as if in response to the invisible rays of the sun. The sheer bout of energy was catalytic, echoing and re-echoing again years later in my Gunung Ledang and Between Heaven and Earth series.”

“It ties up my academic knowledge and training in the West with the local tropical mileau. I transposed and transmuted the Western figurative format (a la the Madonna and the Rock) into a Malaysian setting. Besides, the act of posing (of the figures) is also a Western thing,” he says. 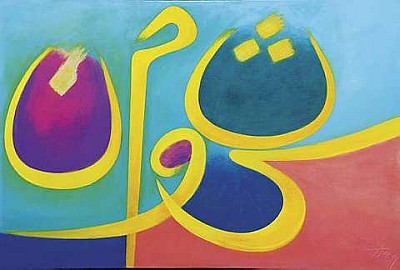 “Then, I was able to respond quickly to the environment,” he notes.

Nipah palm images also straddle another work, Sungai Batu Pahat (1957), which featured in the Cubism in Asia exhibition that toured Singapore, Seoul, Tokyo and Paris in 2006.

In England, where he taught at the Malayan Teachers College in Kirkby from 1958 to 1959, memories of his short homecoming came flooding back in his Padi Fields: Day and Padi Fields: Night.

“Before I went to England, I never had such experience. Doing padi fields or kampung or seaside scenes was de rigeur for every self-respecting Malaysian artist,” he says.

He was inspired to paint Winter Wind from the shadows of the tree branches outside his room window, while The Bait takes a more “cynical view of the games people play in life, with the contemplation and the enticement.”

On his return, he became involved with the Wednesday Art Group founded by Peter Harris, from 1958 to 1962, and the Malaysian Artists Society. In 1962, his work, Hope, won first prize in the Federation Art Competition. He conceded to his being nationalistic, to “emoting the aspirations of a newly independent people in a symbolic way, with fountains shooting up optimistically like in a prayer although there might be problems down there.”

He painted in oils either on canvas or on board until 1964, when he switched to acrylics – a turning point in his art as well as life, as marked by the work Relationships and its sculpture component, Link .

A stint in the United States, where he studied sculpture at the School of the Art Institute of Chicago, from 1963 to 1964, expanded his horizons, literally, when he challenged himself to do big paintings. There, he was struck by the works of Clyfford Still (1904-80), Mark Rothko (1903-70) and Hans Hoffmann (1884-1966) and “especially the West Coast painters more than the New York School.” 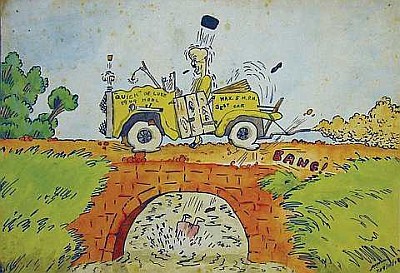 “I found American paintings bolder and of a larger scale, and they have no reference to any discernible objects, like a tree. It was ground-breaking, not only in terms of size, but I was able to handle the space. I managed to overcome the fear of (big) space, and juggled to find a balance between forms and space,” he says.

His sculpture training also led to monumental public works in Kuala Lumpur, such as Allah (at Bangunan Zainal, but since taken out), Lunar Peaks (at UMBC Park, but now partly spoilt) and Growth (Laman Asean).

Then came his stint at the Specialist Teachers Training Institute as principal (1965-73) before he did his master’s in Art History at the University of Hawaii, Honolulu, in 1973. He studied Philosophy in Islamic Art at Harvard in 1974 and that led to the subtle infusion of Islamic elements in his art, helped in part by the resurgence sparked by Ayatollah Khomeini in the early 1980s. Examples of such works are Tawaf (1986), Ruang Qiblat (2004) and Arafah (1999).

Window in the Sky (1969), based on the students revolt in Paris in May 1968, and One Fine Day (1970), based on the May 13, 1969, internecine racial strife, bleed with the violence of red. The former is suffused with cadmium red and cool red while the latter has more vermilion-orangey hues.

The artist has this to say about One Fine Day, which has sharp shafts and a seismic shifting ground: “This is a painting that is very harsh, sinister and frightening based on an event that, fortunately, happened in only a short time.”

Syed Ahmad was also involved in theatre set designs. He did those for Datuk Syed Alwi Syed Hassan’s Lela Mayang (1968), Desaria (1978) and Z.OOM (1984). In 1970, he painted Conference of Souls in response to Kassim Ahmad’s eponymous poem about power and twisting the truth.

His knowledge of local artefacts was honed when he worked for the Asian Arts Museum in Universiti Malaya in 1975, and then as director of the university’s Cultural Centre (1979-82).

Then came Syed Ahmad’s Gunung Ledang series, which plays on the Gunungan/Mahameru theme, using the tumpal shape, coupled with the legend of the mythical princess. Gunung Ledang, after all, is in Muar, Johor, his birthplace.

But the symbolic totemism – as seen in Energy Mountain (1989), Gunung Ledang (1992), Spirit of Ledang (1999) and Semangat Ledang – took a dramatic twist in Gunung Ledang: Tanjung Kupang, when he blamed the 1978 MAS air crash (on which the painting was based) on the folkloric curse. His friend, then Agriculture Minister Datuk Ali Haji Ahmad, died in the crash.

There is also a sense of Olympian strife, like in the ascending bars of the Jalur Gemilang, up to the top and eventually the stars, in his work, Tun Mamat Climbing the Himalayas.

There were times when he was inspired by ordinary life, like when he attended the wedding of relatives of his wife, Datin Hamidah Mohd Noor, where the sirih pinang was offered. Thus the painting, Sirih Pinang (1982/1986). The bold colours, clean geometry and textures of his works are also transmuted into songket scrolls, like Tumpal (1975), in collaboration with Habibah Zikri.

From 1983 to 1991, Syed Ahmad was director of the National Art Gallery. In 1999, his autobiography, Kunang-Kunang, was released.

The Malaysian landscape takes on refreshing new forms in his works, such as Sungai Cincin, Kampung Sungai Cincin and Gombak (where he now lives).

After the sacking of then Deputy Prime Minister Datuk Seri Anwar Ibrahim in 1998, Syed Ahmad waded into the Reformasi protests. His dramatic stance in some works in the series, Between Heaven and Earth (1997-2000), startled many. Works like ? and 19.9.999 are also ironic documentations of that period.

But Syed Ahmad is no card-carrying party zealot. He says that taking a stance is akin to branding or partisanship.

“I have always been conscious of and concerned about several issues. As this is a matter of truth and justice, it jolted and disturbed me. As an artist, I had to respond, not to show off or help any person, but to play my role. It’s not a heroic thing.

“An artist must have the moral courage and responsibility. I played my role and then withdrew back to the art world,” he recalls.

So, what’s next for this octogenarian? Are there any new mountains to scale?

“There is always something to do. I don’t plan. Sometimes, things happen and I respond to them and that acts as a catalyst to draw me into another dimension, perhaps.”

If one had to pick a defining “last hurrah” work by Syed Ahmad, it has to be the mirthful yet enigmatic Senyuman. It has post-pop get-up feel, what with the upbeat backdrops of azure and dark blue, sedate pink and vibrant purple, and an off-red patch sequestered mainly by the cryptic letter Mim.

Senyuman sums up what he once said: “My works have an Islamic soul and a contemporary form.”