IT was a bit belated, by 12 days, but Ahmad Fuad Osman could not have wished for a better 41st birthday present. On Oct 14, his slide projection work Recollections of Long Lost Memories, comprising 71 doctored/”corroborated”/mediated photographs of past historical and social events, made it to the podium of the inaugural Asia Pacific Breweries Foundation (APBF) Signature Art Prize 2008 in Singapore.

It was one of the three Juror’s Prizes worth S$10,000 (RM24,000) each, money which in the wake of the global financial turmoil, Fuad decided to squirrel away for a rainy day. 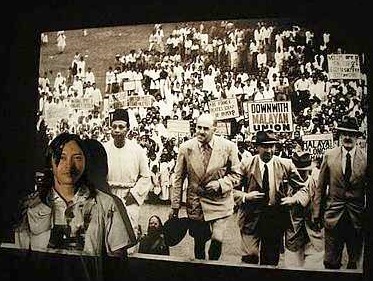 Ahmad Fuad Osman with one of his 71 ‘mediated’ historical photographs in his prize-winning work,Recollections of Long Lost Memories.

The work was nominated by Anurendra Jegadeva, senior curator of Galeri Petronas, as one of three entries from Malaysia, the other two being by Noor Azizan Rahman Paiman and Yee I-Lann.

“I first got the idea during my art residency in South Korea (Goyang National Art Studio, 2005-2006) when I was plied with numerous questions on Malayan history. Then back in Malaysia, I chanced upon a historical photography exhibition celebrating Malaysia’s 50th year at Galeri Petronas,” he recalls. He was then on Rimbun Dahan’s artist residency.

He began reading up more and discovered that many things are not covered in the history books, and when they are, they are usually superficial, with salient points omitted or worse, obfuscated.

Recollections is a return to Malaya of a bygone era. It starts with the 1860s at a time of conspiracy, subterfuge and manipulation among the sultans and other Malay chieftains as well as the British colonials and Chinese, especially the Kapitan Cina in the lucrative tin mine business.

“It was a travel back in time, but the purpose wasn’t very clear,” Fuad says. “Some of the events are not mentioned in the (mainstream) history books and some not in the way it happened. So why can’t I play with history?” he asks.

So was it his intention to mock, rewrite or represent history and thereby question it?

Fuad corroborated with indie filmmaker Hakim in this historical re-engineering by making him act out certain things, some silly and spoofy, like a Masawan (time traveller) usurping spurious recognition for great moments or having surreptitious walk-ins like Alfred Hitchcock in his movies.

There is parody and humour, sometimes with a critical edge. Hakim’s re-enactment is put into the original picture, rephotographed and photo-digitalised into a new plausible reality, complete with scale and shadows.

This was nothing new. He had already done that in a work that had won him one of the two Philip Morris Asean Art Awards Malaysia prizes (2000 and 2003) he had received, when he put himself on the cover of Time magazine.

This new questioning and tampering come at a time when the nation’s so-called “social contract” was being hotly disputed, with the younger generation ignorant of the blueprint decided by their forefathers on the cusp of nationhood. Fuad himself belongs to the post-May 13 generation who did not experience the tragedy of the internecine strife that racked the nation.

To make such artwork (slides projection) viable as opposed to a painting, Fuad’s Recollections comes in three editions, with Galeri Petronas owning one. In fact, the series started off as paintings, with the same spirit of juxtaposing different figures in time in an absurd parody.

Not one to be bogged down by material or subject, Fuad has certainly matured from the international exposures he has had in the last decade starting with the Ghosts and Spirits Festival he was invited to in Germany.

He has since travelled all over for exhibitions and residencies: Indonesia, China, Thailand, the Philippines, Cuba, Pakistan, South Korea, Australia and the United States. After a two-month stint in Vermont in the US in 2004, he did a performance called The Hair Piece/Peace at the Red Mill Gallery where the audience was invited to cut his hair, very much like the Yoko Ono invitation to cut the clothes she was wearing.

In November, two of his works will go on show in Liverpool in Britain as part of the Malaysian art show organised by Matahati, the art cooperative he helped found. Earlier this year, Matahari aritists put on a major survey show at Galeri Petronas.

Like Hamir Soib, Fuad has emerged with brilliant works to stand tall alongside Bayu Utomo Radjikin and Ahmad Shukri Mohamed as Matahati legends.