Here are some of the legendary actor's top cop films.

Police Story (1985): Considered one of Chan’s greatest and most popular movies ever, it features Chan as Ka Kui, a Hong Kong detective who tries to bring down crime lord Chu Tao. This movie contained some of the most inventive action sequences and best stunts he has ever done, including an early chase in which Chan hangs on to a double-decker bus with an umbrella. It also won Best Film at the 1986 Hong Kong Film Awards.

Police Story 2 (1988): After the massive damage he caused in the first film, Ka Kui is demoted to traffic officer. Things soon get messy again when his arch-enemy Chu is released from prison and goes after the cop who put him in the slammer. Though not as memorable as the first film, the sequel still featured a high level of action and stunts. the best one being Chan running across the roofs of buses during a chase scene.

Police Story 3: Supercop (1992): Malaysia Boleh! This was arguably Datuk Michelle Yeoh’s breakthrough movie, playing a policewoman from China who joins forces with Ka Kui to bring down a drug ring. Best known as “the one where Jackie Chan flies around Kuala Lumpur while hanging from a helicopter ladder”, it was Yeoh’s performance and derring-do that caught the eye here.

Police Story 4: First Strike (1996): This was where the franchise started to go downhill. Made during Chan’s early days in Hollywood, he tried to appeal to both Eastern and Western audiences by filming this partly in English, which made for some highly cringe-worthy dialogue and a pretty lame plot. Still, it turned out to be Chan’s biggest ever box-office hit in Hong Kong at the time.

New Police Story (2004): Older and much wiser, Chan returned to the franchise with this remake of the original, and put the focus more on drama than action. This was probably the first Police Story where Chan’s acting stood out more than his fighting, garnering him a Best Actor nomination at the 24th Annual Hong Kong Film Awards. 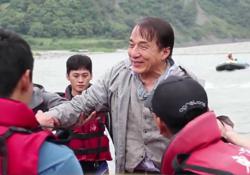