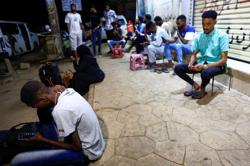 These frescoes were created around 134AD to 138AD in a Dormus that was partially destroyed to make way for the construction of the Caracalla public baths in Rome. — AP

One of the most spectacular examples of ancient Roman baths in Italy, the Baths of Caracalla, has become more spectacular. Authorities in Rome recently opened to the public a unique private home that stood on the site before the baths, with a frescoed ceiling and prayer room honouring Roman and Egyptian deities.

The two-storey home, or “domus”, dates from around 134AD to 138AD, during the reign of the Emperor Hadrian. It was partially destroyed to make way for the construction of the Caracalla public baths, which opened in 216AD. The site today is a big tourist draw for the multi-levelled brick remains of the Imperial Roman baths, libraries and gyms and the marble mosaics that decorated the floors.

The home, believed to have belonged to a wealthy merchant’s family given the quality of the frescoes, therefore represents what was at the same site before the baths, and shows how the city evolved in the 2nd and 3rd centuries AD, Daniela Porro, Rome’s archaeological superintendent, said at the opening.

The domus ruins were first discovered in the mid-19th century about 10m underneath the current ground level of the baths. They were excavated about a century later, with the inner prayer room and fragments of the frescoed dining room ceiling removed for restoration and conservation.

The prayer room had been briefly exhibited but has been closed to the public for 30 years. It reopened last week alongside some of the never-before-seen ceiling fragments that feature images of Bacchus, the Roman god of wine and agriculture, using prized Egyptian blue and Cinnabar red pigments, conservators said.

“Both the subject type and the particularity of the painting are unique in the Roman panorama of the Hadrianic age (when the domus was built),” said Mirella Serlorenzi, director of the Caracalla site.

The inner temple features images of the Roman gods Jupiter, Juno and Minerva on one wall, and silhouettes of the Egyptian deities Isis and Anubis on other walls, evidence of the religious “syncretism” – the blending of different belief systems – that was common in Roman public monuments but not in domestic ones of the period.

“It’s the first time we find something like that in Rome, but also in the world because it’s not like there are a lot of them,” said Serlorenzi.

She noted that what experts know about Roman-era painting comes primarily from the towns of Herculaneum and Pompeii near Naples, which were destroyed and their remains preserved under layers of volcanic materials when Mount Vesuvius erupted in 79AD.

“So Roman painting after the 1st century AD has remained a mystery because we just haven’t had rooms so well conserved up to the ceiling,” Serlorenzi said.

The domus exhibit, entitled Before The Baths: The House Where Gods Lived Together is now a permanent part of the Caracalla itinerary. – AP 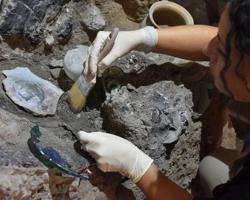