The popularity of some shows have led to an increased interest in screen tourism. — UNWTO

The United Nations World Tourism Organisation (UNWTO) and Netflix are releasing a report that takes a look at the role of films and TV programmes in driving tourism and cultural affinity.

Titled The Global Report On Cultural Affinity And Screen Tourism, the publication examines the growing affection one has towards a particular country or culture displayed on the screen.

The report will help policymakers and key stakeholders within the tourism sector to implement policies that make their destinations attractive for audio-visual producers.

“Both tourism and the audiovisual sectors celebrate and promote culture, support jobs and provide opportunities in diverse locations. The joint work of UNWTO and Netflix will help destinations realise the potential benefits of screen tourism,” UNWTO secretary general Zurab Pololikashvili said in a statement.

The report also aims to help in the building of focused strategies to promote tourism and consumption of local culture, investing in skills and training to develop the local film and creative sectors to ensure a high level of talent, infrastructure and production capacity and integrating tourism and showcasing culture at film festivals to deepen the global audiences’ knowledge.

“As highlighted in this research, we have been able to demonstrate conclusively what we instinctively already believed, which is that alongside the desire to travel and visit destinations, exposure to screen content also leads to greater interest in heritage, culture, language, and developing interpersonal relationships.

“This truly demonstrates that the creative industries, cultural exchange, storytelling, and tourism are all interlinked and can transform the way communities perceive and connect with each other,” he said.

The success of some Netflix productions has led to greater tourism interest in certain countries.

In France, foreign tourists are streaming to the locations highlighted in shows such as Emily In Paris, Lupin and Marseille.

Emily In Paris for one have inspired tourists snapping selfies in front of some of the spots peppered throughout the French capital from the series.

It was reported that a restaurant frequented by the main character now offers a “Menu Emily”. A bookshop that is often featured in the series has also been enjoying a rush of interest from fans. 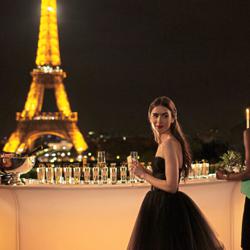