How the pandemic has transformed Italy’s historic sites 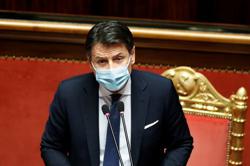 Because of the pandemic, only one of many entrances of the Roman Forum may be used. — PETRA KAMINSKY/dpa

ONLY one entrance is open. The amount of available tickets is limited. Visitors can only move through the sites in one direction, and some pathways are cordoned off.

Tourists might still be able to visit many of the ancient sites in Rome during the pandemic. But the experience has changed, as has the research at some of Italy’s archaeological digs, leaving archaeologists worried.

It’s not just in the capital: Throughout Italy, similar changes are in place at other historical and archaeological sites, including in Ostia, Agrigento and Pompeii.

“Archaeology in Italy is cautiously returning to normal again, ” says Ortwin Dally, managing director of the Rome department at the German Archaeological Institute. But, he says, it is difficult to predict how things will beyond 2020.

“Ruins like the Colosseum are still very empty, and in a way, that’s nice – the Italians are now rediscovering some of their cultural treasures. You never see Pompeii so empty, ” says Dally. “On the other hand, however, that striking emptiness also shows that revenues have fallen dramatically.”

Massimo Osanna heads the world-famous excavation site of Pompeii, at the foot of Vesuvius. In 2019, almost four million people visited the ancient Roman city buried beneath a carpet of volcanic ash. “The numbers are far lower now, ” he says, calling the change “epochal”.

Italy’s museums were shut throughout the spring, during the country’s coronavirus lockdown. Now, Osanna, an archaeology professor, is looking on the bright side. Many people working at the site were able to continue their research even during the lockdown, he says. And the government has provided millions of euros in financial aid.

Anyone visiting Pompeii has to follow a particular path when walking through the site these days, and for now, some areas where the entry and exit were the same are shut. “We had to rethink our sites. Two access routes were a must, ” he says, adding that the requirement also led management to open up other areas that were previously closed.

Advertising has also changed, and Osanna is publicizing places that hadn’t been big attractions until now.

They include excavations in Oplontis, near the coastal town of Torre Annunziata, and the Villa Poppaea, a 2,000-year-old luxurious Roman seaside villa with painted walls – he says it’s a jewel that is all too often overlooked.

Considering the pandemic, Dally is less concerned about the larger state museums than about the smaller sites. “The lack of income is particularly noticeable in places such as the Parco Archeologico di Agrigento, which depend on it and aren’t 100-per-cent state-funded.”

Meanwhile in cities, the visitors who make it, as well as the locals, can now enjoy the empty streets and squares that are reminiscent of photographs from the 1950s.

What’s gone are the buses packed with tourists, groups of seniors replete with tour guides, or the large and well-heeled travel groups from Asia and the United States.

Strolling across Rome’s main shopping street towards Piazza Navona, stores were recently all offering discounts of up to 70%, whether they’re offering fast fashion or designer gear. There are even bargains to be found on the latest collections. And the empty, abandoned stores show the depth of the troubles the city faces.

In Italy, tourism makes up 13% of the country’s GDP, a statistic that makes clear just how serious the silence is in Rome.

Streets and historic sites are not expected to fill up anytime soon, and October has seen an uptick in coronavirus infections in Italy and across Europe.

During the summer, Italy seemed to be doing better than most other European peers in terms of controlling a feared second wave of the coronavirus, before charting the most infections since late March in a mid-October spike. – dpa

5 popular restaurants Malaysian foodies can visit in the future
Over-the-top gardens are the new vacation spots
MCO 2.0: Hotels in Malaysia feel neglected, being 'left to collapse'
MCO 2.0: Tourist guides need more than RM500 assistance to sustain livelihood
MCO: Malaysians feel the travel ban blues, but happy to avoid nosy relatives
Let’s get beefed up for wagyu, the meat that melts in your mouth
Are travellers ready to brave 19 hours (and more) in a plane?
KL to be transformed into street art capital
Gordon Ramsay to open restaurant in Malaysia, netizens want the 'Idiot Sandwich'
Fire razes Andaman Langkawi, guests safely relocated