St Basil’s Cathedral (right) and the Spassky Tower in the rays of the setting sun. Photo: Press Office of Moscow City Tourism Committee

Anything that can go wrong is going wrong as I stand before a Russian security officer, his burly physique blocking my entrance to the Kremlin.

Yes, we are talking about the Kremlin in Moscow, Russia. Since it is such an important venue, all visitors are subjected to very strict security procedures. You will need to pass through a checkpoint, where there are full-body scanners and metal detectors, much like those found at airports.

When my turn came to go through the metal detection zone, the alarm suddenly blares loudly. I rummage through my pockets to see if I might have left a coin or two inside, but my search didn’t turn up any loose change.

The security guard begins to look impatient and grunts something in Russian. I try to look for my guide and the rest of my tour group, but the large crowd isn’t making things any easier.

Just as I thought I will be thrown out for stalling the line, I find the incriminating item tucked within my thick winter jacket and layers of thermal wear – an audio guide device. Unsmiling, but ultimately satisfied, the officer lets me through and I am once again reunited with my friendly guide and local expert, Diana.“What’s with that frown?” the dark-haired petite woman asks, upon seeing my exasperated self. “Smile, you are beginning to look like one of the locals here.”

That exciting misadventure is secondary next to the many amazing and eye-opening sights I’m bound to see on a week-long tour to Moscow and Saint Petersburg with Trafalgar. 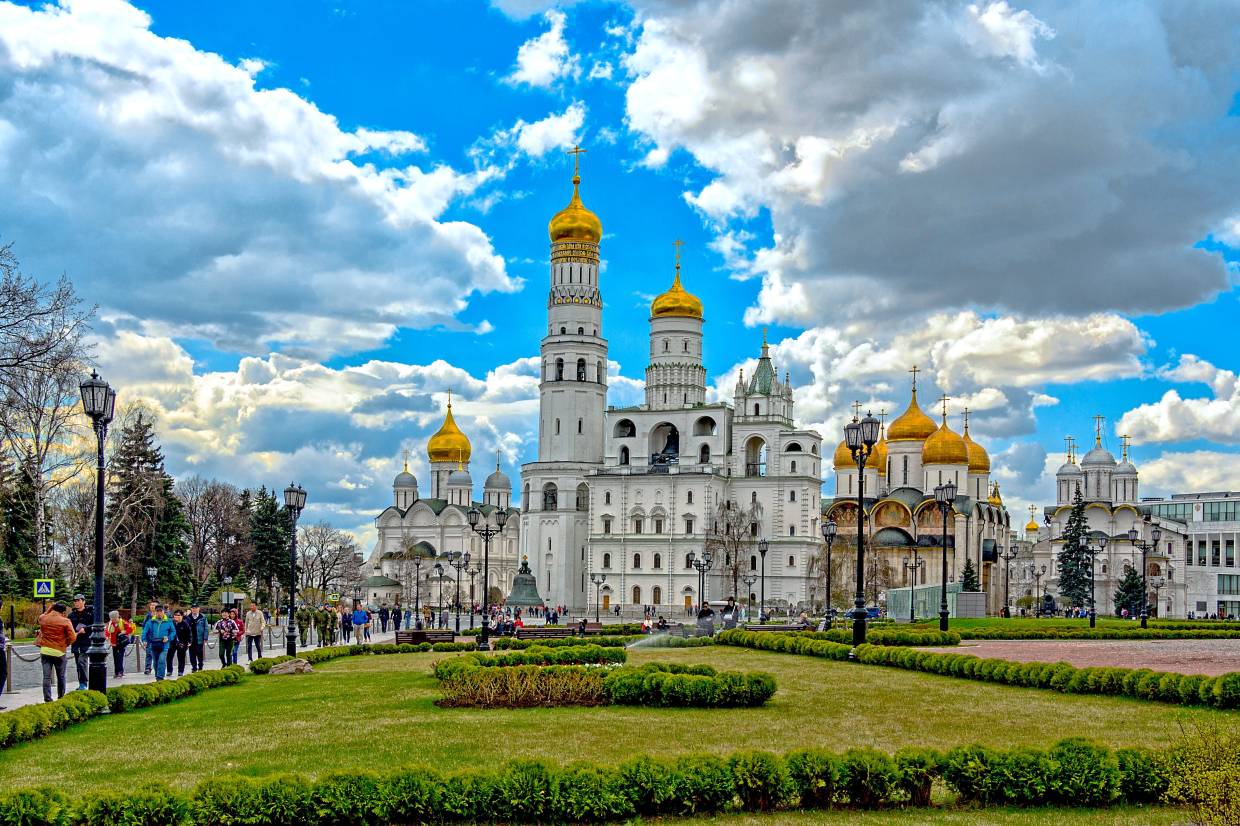 Cathedral Square is located in the heart of the Kremlin grounds. — Press Office of Moscow City Tourism Committee

The famous Kremlin, despite its hard exterior, is not at all what it seems on the inside. A fortified complex in the centre of Moscow, it is surrounded by tall and thick walls that are recognisable by its notches and towers that are said to house expert shooters.

The venue as a whole, is guarded by elite soldiers who are tasked with protecting government officials and subjects within the fortress. After all, it is the official residence of President Vladimir Putin. I’m told he doesn’t actually live there, though. His home is in a swanky and heavily guarded neighbourhood west of the city. 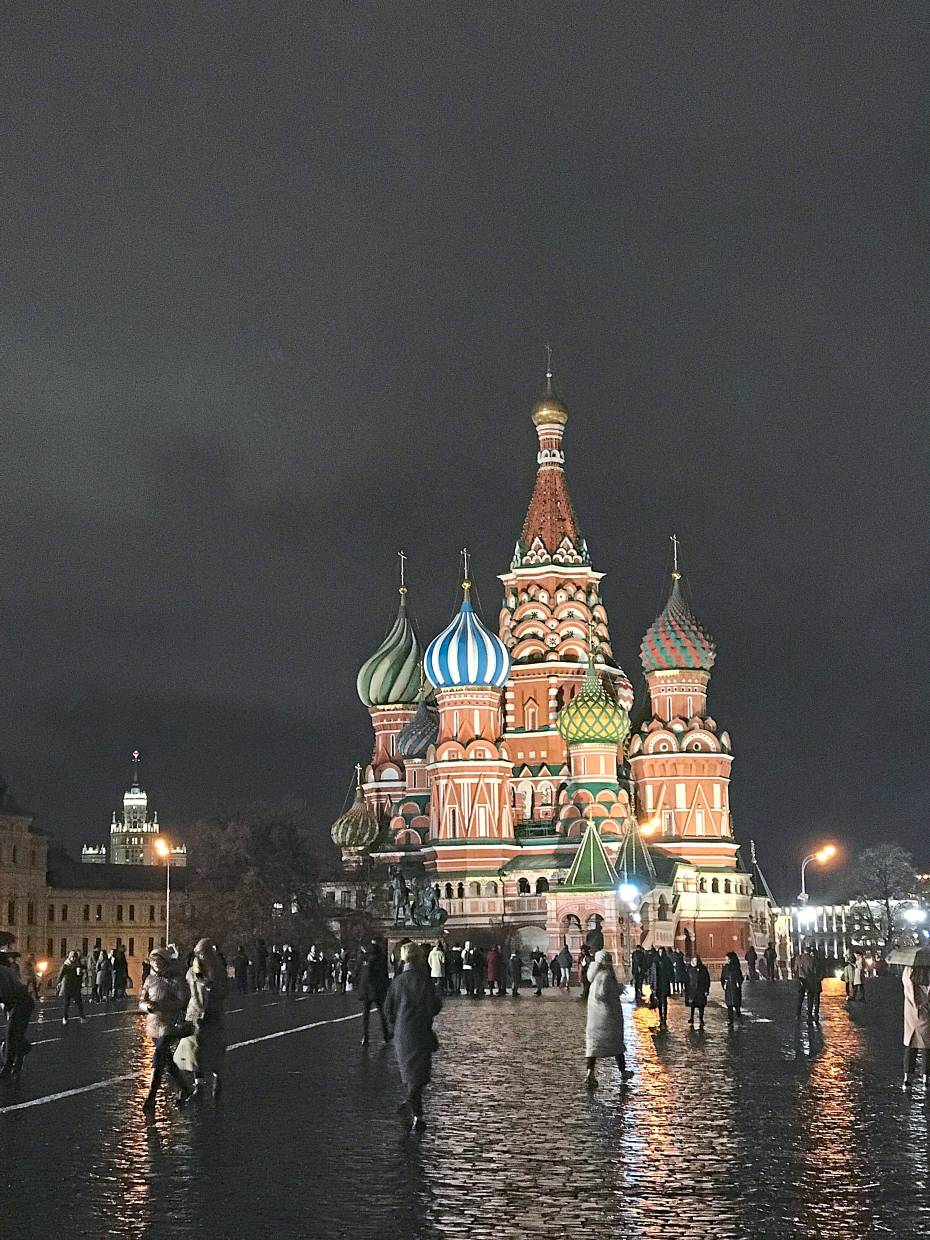 It's worth visiting the Red Square at night to check out the evening panorama. — CHESTER CHIN/The StarNaturally, I expect to see solemn military buildings and formal government offices inside the Kremlin. Instead, what I find are welcoming cathedrals, stunning palaces, insightful museums and well-kept gardens.

The Armoury for one, holds treasures from the Romanov’s days. Here is where visitors can find renowned Fabergé eggs and original coronation dresses of former empresses.

Meanwhile, the churches are all contained in an area known as the Cathedral Square, which is located in the heart of the complex. Before entering the Assumption Cathedral, Diana quickly reminds our tour group not to take any photos once we are inside.

“We never take selfies inside a Russian church. On one hand, it is against the Russian Orthodox rule. On the other hand, it’s just bad luck, ” she warns.

Venturing inside, I am amazed to find the interior of the six-pillared building to be ethereally bright and spacious. The walls are decorated in colours of red, blue and gold featuring various martyrs and biblical depictions.

After providing some explanation about the iconostasis (a wall of icons and religious paintings) in the church, Diana diverts our attention to the western wall which depicts a scene from the Apocalypse.

“What it is saying is that all Russians will go to heaven, while everyone else will go to hell, ” Diana drily remarks, before adding, “It is church propaganda, not my propaganda”.

If it is the divine you seek, there are plenty of heavenly trails to be uncovered in this country. Many of the churches that survived Russia’s complicated Soviet past (a secular time when religious buildings were either closed or demolished) have been beautifully restored. Some were even reconsecrated and function as active worship venues today.

Of all these, none is probably as iconic as the colourful St Basil’s Cathedral. Instantly recognisable by its psychedelic concoction of striking colours and zany patterns, the structure is located in the southern end of the famed Red Square. Turn behind and the ember hues of the equally spectacular State Historical Museum beckons at the northern end.

The scene at the Red Square, especially at night, is quite spectacular. The sight of St Basil’s Cathedral, State Historical Museum and GUM department store being lit up is absolutely magical.

Therefore, it is worthwhile to make another trip here at night. After a scenic stroll at the square, there are several restaurants as well as fast food chains where you can grab dinner. Beef stroganoff is one of Russia’s local cuisines.

Talking about food, it is possible to get a three-course meal at an inexpensive restaurant for about 600 rubles (RM39.79). Do note that the cost of living in Moscow is relatively higher compared to other Russian cities.

However, getting authentic Russian food like blini (a type of pancake), borscht, pirog (stuffed pie) and beef stroganoff proved to be harder than I thought it would be.

In fact, throughout my week-long sojourn in the country, I stumble upon more international coffee and fast food chains than local cafes and restaurants. There is also an abundance of Chinese restaurants here (Fun fact: Russia is among the top three destinations for Chinese travellers).

Three decades after the Iron Curtain has been lifted, this former USSR nation has seen the far-reaching effects of globalisation.

That observation fuels my thoughts as I stand by Lenin’s Mausoleum – which contains the embalmed body of Vladimir Ilyich Lenin, the founder of the Soviet Union – while enjoying a cone of traditional Russian ice cream. 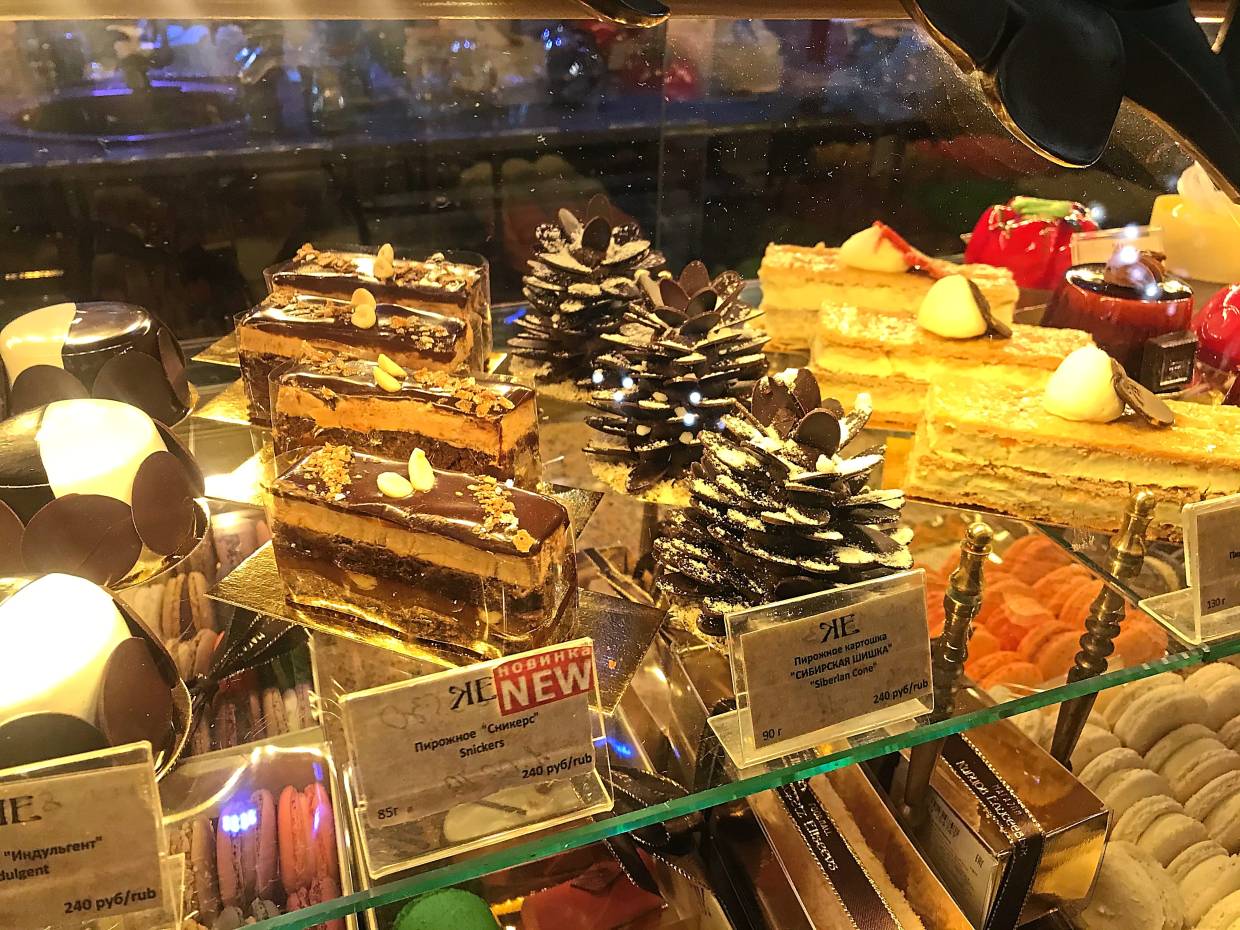 Russian desserts are not to be missed if you have a sweet tooth.

While I didn’t sample much of the local cuisine, what I did enjoy in excess are fantastic desserts. For those with a sweet tooth, the saccharine snacks here are just... wow.

“The secret is in the butter. We use real butter in Russia, that is why our ice cream and chocolates are so good, ” Diana boasts, emphasising the word “real”.

It’s a remark validated as I sit before a spread of delectable cakes, pralines and creme brûlée at Moscow’s world-famous Café Pushkin. Named after celebrated Russian poet Alexander Pushkin, the restaurant is housed within a renovated 19th century Baroque mansion.

The dining establishment has over 8,000 reviews on TripAdvisor, many who commend its luxurious interior.

I would go on to see more showcase of opulence at the city of Saint Petersburg.

The journey between both capitals takes only about four hours on a high-speed train, but the ambience in Saint Perterburg is worlds apart from that of Moscow’s. 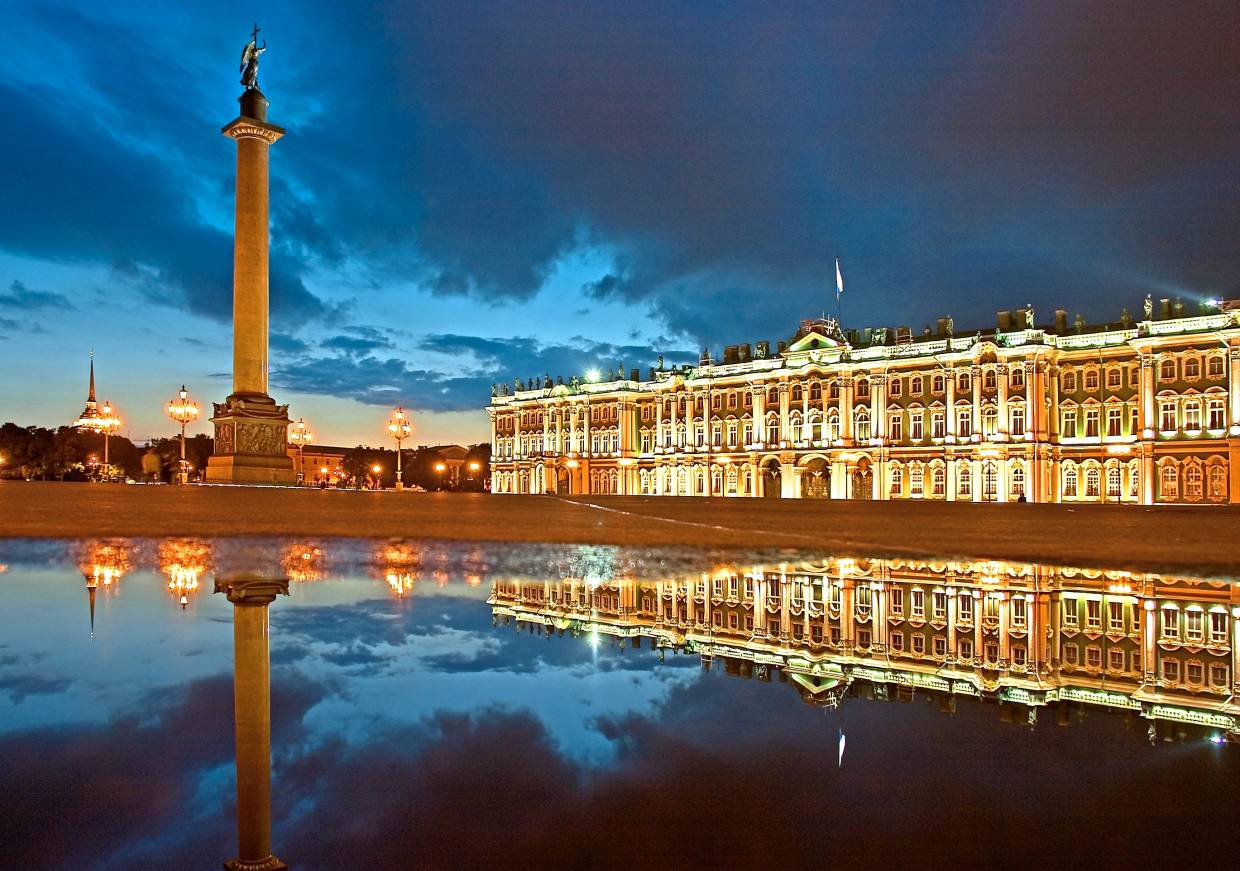 Where Moscow feels more cosmopolitan (overwhelming even, at times), Saint Petersburg takes on a more cultural vibe. But then again, the latter is Russia’s imperial capital.

There are numerous palaces scattered throughout Saint Petersburg, lending effortless grandeur to the city, which is often hailed as one of Europe’s prettiest.

The greatest of all these noble residences can be found on the banks of the Neva river – the Winter Palace, official residence of Russian emperors. Today, it is better known as the Hermitage, the second largest museum in the world.

The colossal collection (over three million items, ranging from Egyptian mummies to a majestic peacock clock, on display across 360 rooms) means that it is impossible to see everything in a day – or in my case, a span of two hours. Fortunately, I’m hosted by an experienced guide who curated a comprehensive tour through stately hallways and brilliant ballrooms.

Some historical knowledge is an added advantage to truly fathom the revolutionary spirit of Saint Petersburg. But even those with minimal insights of the fall of the monarchy will get a sense of why the Russian Revolution happened just by touring the top attractions in the city. 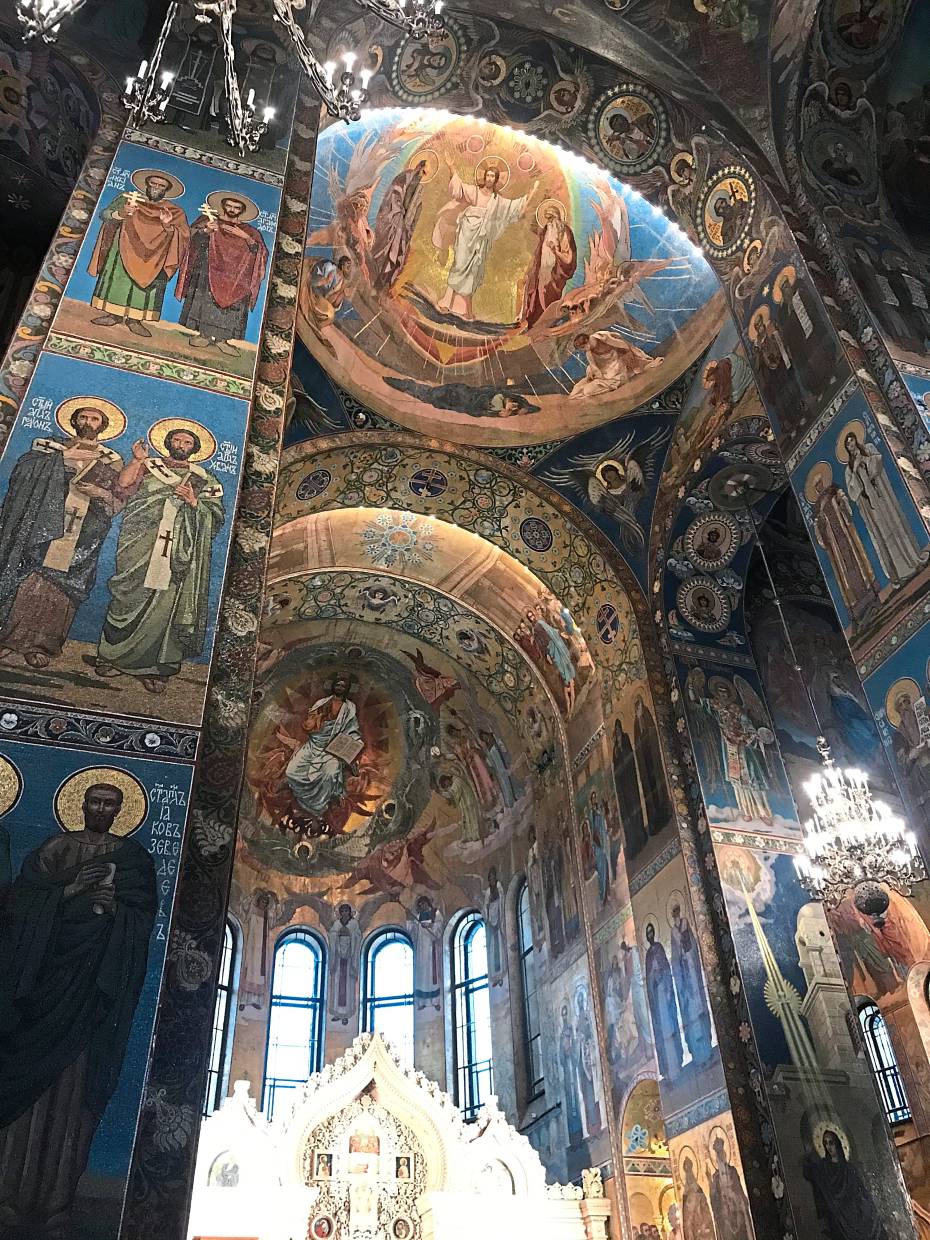 The elaborate interior of the Church of the Saviour on the Split Blood is simply breathtaking. — CHESTER CHIN/The StarThe grandiosity of Catherine Palace, while breathtaking, doesn’t exactly elicit sympathy for the extravagant lifestyle of the Tsars.

“It’s almost comical isn’t it – all this excessive display of wealth. No wonder the revolution happened, ” a fellow journalist in the tour group quips.

A sense of that tumultuous history is evident at the Peter and Paul Fortress. Located on Zayachy Island, the defensive fortress houses a cathedral where the Romanovs are buried – including the legendary Grand Duchess Anastasia.

And over at the elaborate Church of the Saviour on the Split Blood, visitors are reminded of the assassination attempt on Tsar Alexander II in 1881.

But it’s hard to fault the Tsars’ commitment towards the grand and ostentatious. It’s exactly this kind of indulgence that makes my maiden trip to Russia so memorable.

As our tour bus strolls along one of Saint Petersburg’s many great bridges, with the magnificent golden dome of St Isaac’s Cathedral reflecting the evening sun over the horizon, I find myself dazzled by all these pursuits of beauty.

For details on special offers and to book your holidays, get in touch with Trafalgar Travel Centre (managed by Holiday Tours) at 03-6286 6220 or visit holidaytours.com.my/trafalgar. 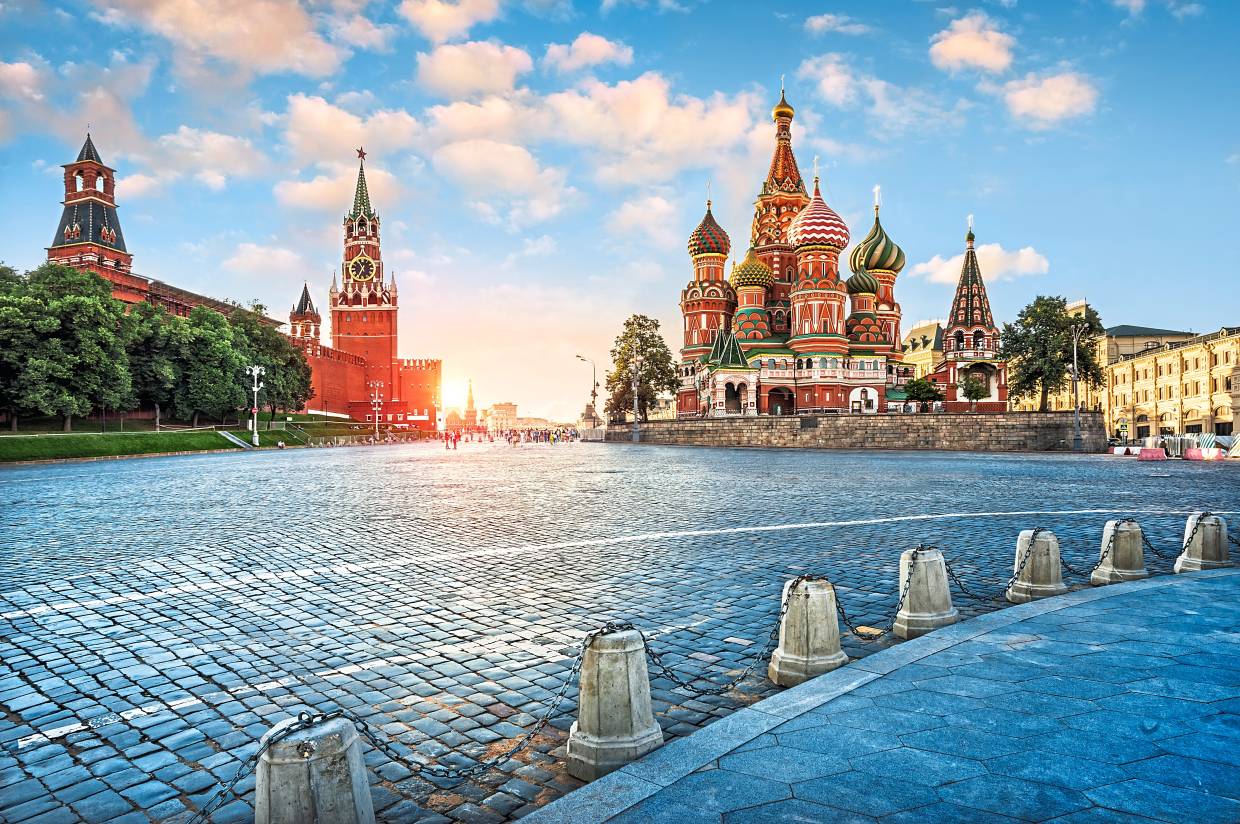 St Basil’s Cathedral (right) and the Spassky Tower in the rays of the setting sun. Photo: Press Office of Moscow City Tourism Committee

Cathedral Square is located in the heart of the Kremlin grounds. — Press Office of Moscow City Tourism Committee

The elaborate interior of the Church of the Saviour on the Split Blood is simply breathtaking.

Check out royal collection, including beautiful dresses, at Catherine Palace.

Beef stroganoff is one of Russia’s local cuisines.

The Peacock Clock at Hermitage is one of the highlights at the museum.

Russian desserts are not to be missed if you have a sweet tooth.

It's worth visiting the Red Square at night to check out the evening panorama.