You can find Japan's oldest mosque in Kobe

If you’re visiting the city of Kobe in Japan, there are lots of interesting places that you can check out like the harbour and Kitano-cho, a small district with quaint European houses.

But not many realise that Kobe is also where Japan’s first and oldest mosque is located.

Founded in 1935, the mosque is situated in Kitano-cho, one of Kobe city’s more well-known tourist areas. It stands juxtaposed among the historical European-style buildings there, some of which can be visited.

The mosque was constructed through donations collected by the Islamic Committee of Kobe from 1928 to 1935, from Indian, Tatar and Turkish Muslims living in the neighbourhood. Although the property was confiscated by the Imperial Japanese Navy in 1943, it continues to function as a mosque today. 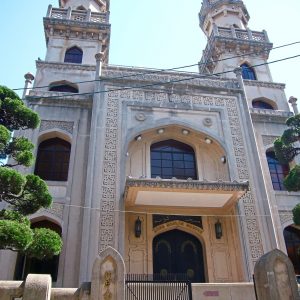 The architecture of the mosque is rather unique. It was built in the traditional Indian style by a Czech architect Jan Josef Svagr (1885-1969) who also designed several other religious buildings in Japan.

Because of its structure and basement, the mosque survived through the air raids that decimated the city in 1945 during World War II. It also survived the Great Hanshin earthquake in 1995.

The prayer room comprises an elegant chandelier and ornate carpeting.

The mosque is open to all visitors; operating hours are from 10am to 5pm. For more information, head to http://kobe-muslim-mosque.com/.

Besides Kitano, if you’re visiting Kobe, here are some other interesting things to do and see:

When people think of Kobe, they often think of Kobe beef which is a type of wagyu beef. With a tender texture and rich flavour, it is said to melt in one’s mouth” when eaten. This is because of its high level of fat marbling which causes it to cook quickly while staying soft, juicy and tasty. These days, chefs and cooks at special “tourist” restaurants in Kobe will put on a fancy show while cooking your wagyu right in front of you. 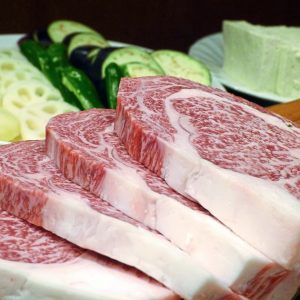 You can find a handful of restaurants in Kobe that serve certified halal wagyu beef.

This busy shopping and entertainment area between JR Kobe Station and the waterfront area of Kobe port offers shops, restaurants, cafes and more. There’s even a ferris wheel somewhere in the middle. The place is especially beautiful and romantic when night falls, with the harbour illuminated by colourful lights.

Nature lovers might enjoy a hike to Nunobiki Falls. Just take the train to the Shin-Kobe Station. The path is well made and you will see several waterfalls in the area, the largest of which is Ontaki Falls. You can also see a reservoir and get a great view of the city. But, if sweating it out is not your thing, then just take the Shin-Kobe ropeway. This cable car links to several points around Mount Rokko where you can get a great view.

This is a waterfront park featuring a grassy area and open courtyards of fountains and modern art installations. It is also home to the Kobe Maritime Museum and red steel Kobe Port Tower.

The popular “Be Kobe” sign is there but do queue up for your turn to take pictures if there are a lot of people.

You can also go for a lunch or dinner cruise from the Nakatottei Chuo Terminal and enjoy impressive views of the cityscapes.

You can find Japan's oldest mosque in Kobe