Sunrise from the top of Mount Muanganui. Its Maori name means ‘caught by the morning sun’. — RAMBO ESTRADA/Tourism Bay of Plenty

Normally I’m not one to fuss about “worst possible scenarios”, but my current circumstances demand that I reflect on my life’s choices. Maybe I could have been nicer to the boy I was mean to. Maybe I should have just eaten that last piece of doughnut this morning.

That’s what being at a live volcano does to you – it makes you think about your life’s decisions. I’m at Whakaari (also known as White Island, and pronounced “fah-kari”), the most active volcano in New Zealand, and I’m about to venture into the inner crate.

“Before we start our tour, I need everyone to understand that we are at an active marine volcano. There’s the possibility of an eruption ... and I cannot promise you it won’t happen while we are on the island,” my guide Sarah, who is also a professional geologist, announces gravely.

“If you would like to head back to the ferry, feel free to do so. If anyone is feeling anxious, we can provide counselling,” she adds, as the stench of sulphur stings the air.

Maybe I shouldn’t have devoted almost a decade of my life to Game of Thrones ... 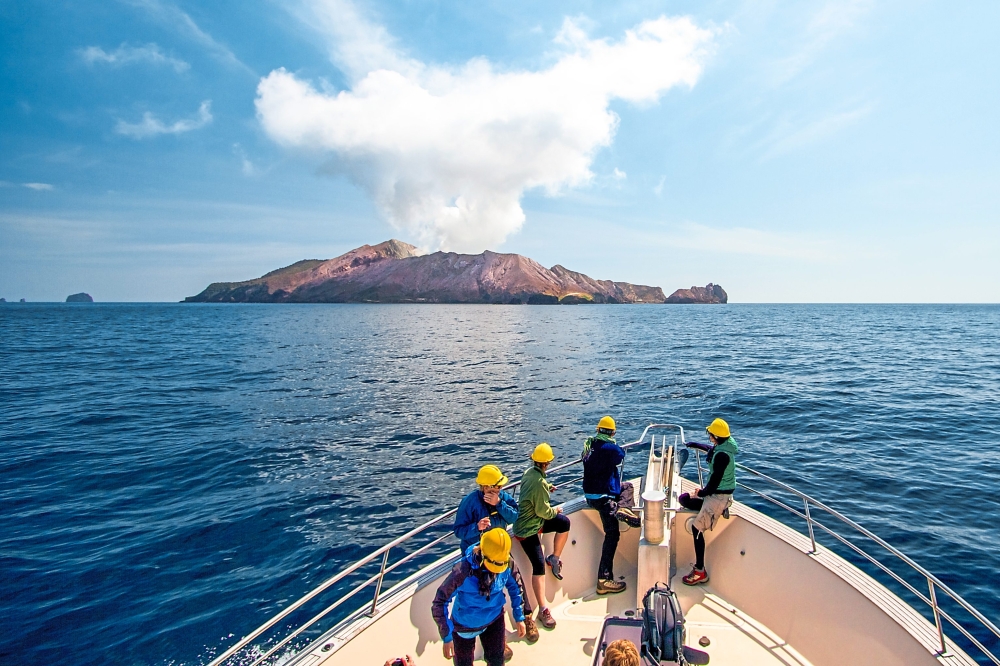 Whakaari's location about 49km off the coast of Whakatane on the Pacific Ocean requires an 80-minute ferry ride. — KATIE COX/Tourism Bay Of Plenty

The New Zealand Earthquake Commission issued a level one alert on the day of our visit. The reading, which falls on a range of zero to five, signifies “minor volcanic unrest”. 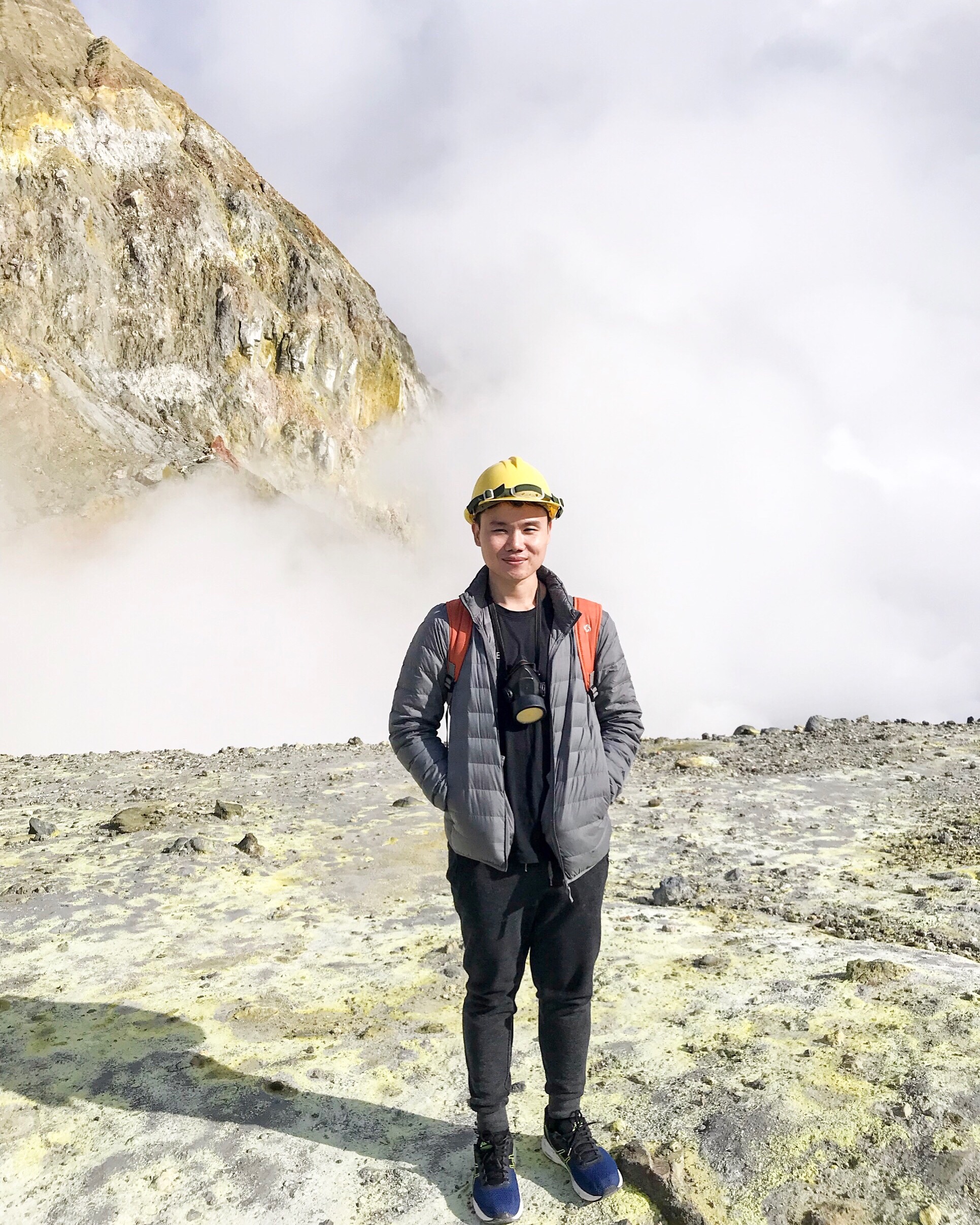 The writer at the inner crate area of the active marine volcano on White Island.

The proof of imminent danger is in our safety gear. All tour participants are fitted with gas masks and hard hats, which must be worn at all times. The last eruptive episode was in 2012, but unrest continues until today.

Whakaari in the sunny Bay of Plenty region is certainly not for the faint-hearted. A trip here requires a certain amount of physical fitness and mental strength. Visitors need to walk on an uneven rock surface, in a highly acidic environment, for up to two hours.

Its location, about 49km off the coast of Whakatane on the Pacific Ocean, requires an 80-minute ferry ride. Those prone to seasickness will find this to be an immense challenge.

Of course, there’s also the shorter helicopter ride for a premium fee.

But exploring the geothermal giant makes the bumpy journey worth all the hardships encountered. Being close to magnificent volcanic topography – from roaring steam vents to bubbling pits of mud and hot volcanic streams to steaming acid lake – is certainly an eye-opening episode. 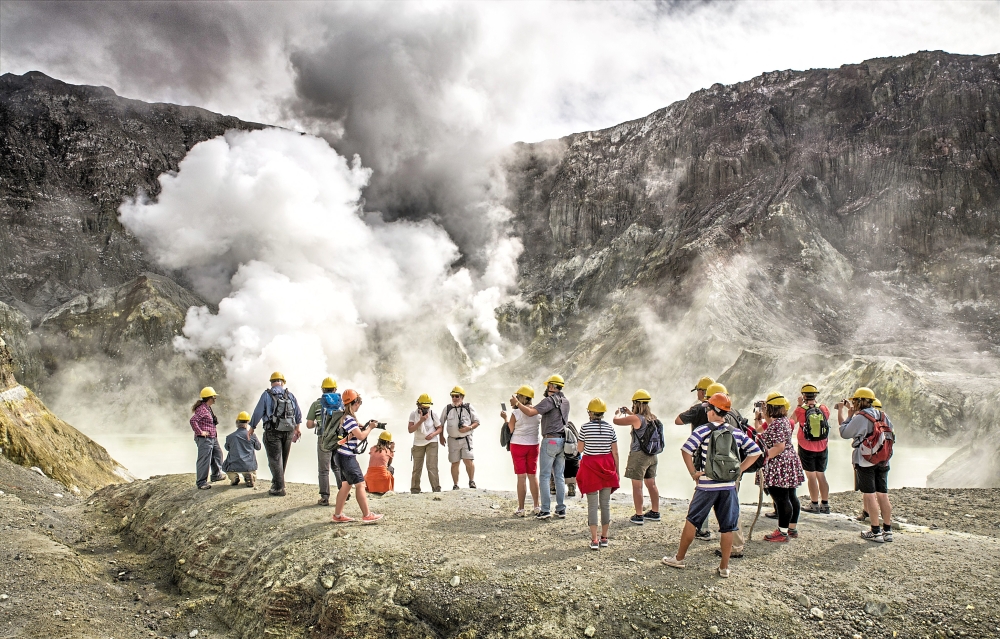 Explore the inner crate of an active marine volcano at White Island.— Tourism Bay of Plenty

Back on the mainland, the charming town of Whakatane beckons with its strong Maori values and culture. This is most prevalent at Mataatua, New Zealand’s only repatriated meeting house. The impressive structure returned home to the country after spending more than 130 years away.

Built as a symbol of unity by the Ngati Awa tribe in 1875, the Maori home was eventually uplifted by the government five years later to represent the country as an anthropological exhibition during the late 18th to early 19th centuries.

And for over a century, Mataatua became just that – a travelling show, as the Ngati Awa community calls for its return. Stepping into the fully carved ancestral home, I can’t help but feel a pang of melancholia.

Before being invited in, visitors will go through the ancient ritual of powhiri. The welcoming ceremony involves speeches, dancing, singing and the hongi (a traditional greeting method where two people press their noses and foreheads together). 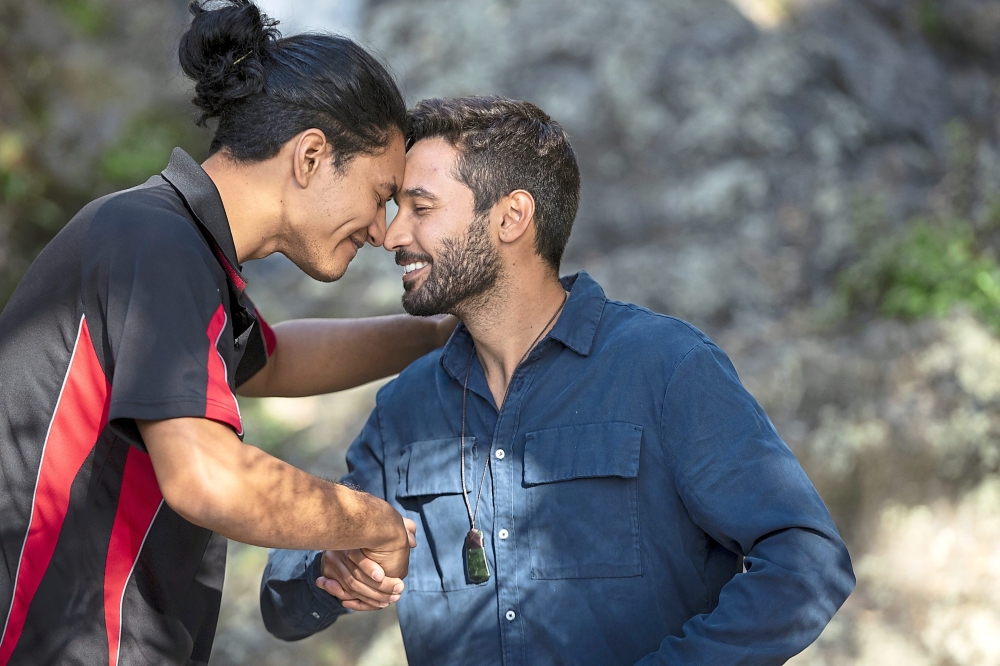 The hongi is a traditional greeting method where two people press their noses and foreheads together. — GRAEME MURRAY/Tourism New Zealand

The highlight of the tour, aside from the amazing carved representations of great chiefs, is the fantastic light show that brings to life some of the tribe’s most famous folklore.

More Maori tales await at Mount Maunganui in Tauranga, about an hour and half drive along the scenic Pacific Coast Highway. Its Maori name Mauao means “caught by the morning sun”.

Legend has it that the male mountain was trying to distance himself from an unrequited love with the help of night fairies, but was unfortunately stuck halfway when daylight chased the creatures away.

Rising 232m from the sea, the extinct volcano has several tracks that lead up to the summit. Popular among the friendly locals and curious travellers alike, the mount is certainly a focal point in the funky coastal city. 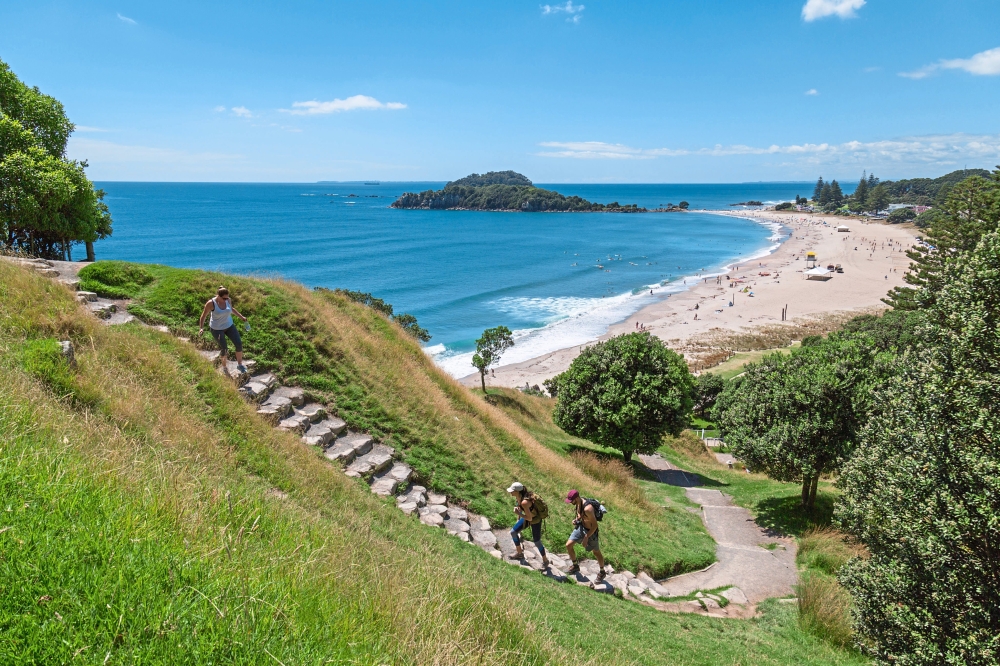 Rising 232m from the sea, Mount Maunganui has several tracks that lead up to the summit. — KATIE COX/Tourism Bay Of Plenty

“You can tell the locals from the tourists when you’re hiking up. But you really have to get to the top, it will be worth the climb,” says Carol, my guide in Tauranga.

There are moments when I feel like turning back, but Carol is right – the view from the top is worth all the huffing and puffing. From the summit, I get an absolutely stunning panoramic view of the entire Western Bay of Plenty.

Those looking to soothe those muscle aches can always check in to Mount Hot Pools. The venue offers heated saltwater pools that is believed to ease joint inflammation and rebalance the body.

For a breezier walk, there is a 45-minute scenic trail that brings one over to the renowned Main Beach. With its glittering white sands and great ocean waves, it’s little surprise this place is crowned the best beach in New Zealand.

Bay Of Plenty’s sunny climate means that the beach is accessible all year-round. It’s also a great place to just people watch or enjoy the view of Mount Maunganui.

That nice climate also makes the region a great place to check out kiwi fruit farms and Manuka honey factories.

If anything, my trip to New Zealand’s North Island has imbued in me a sense of appreciation for nature and the outdoors. And this is coming from a city boy whose weekends are usually spent at the mall.

A notable highlight is experiencing the glow worm kayak tour with Waimarino at the picturesque Lake McLaren, about 20 minutes away from Tauranga.

For someone who has never kayaked before, I find myself doing it for the first time ... at night!

With only the stars above to light our path, we paddle gently on calm waters. When we enter a narrow high-sided canyon at the top of the lake, that’s when I see it – the glow of a million lights. 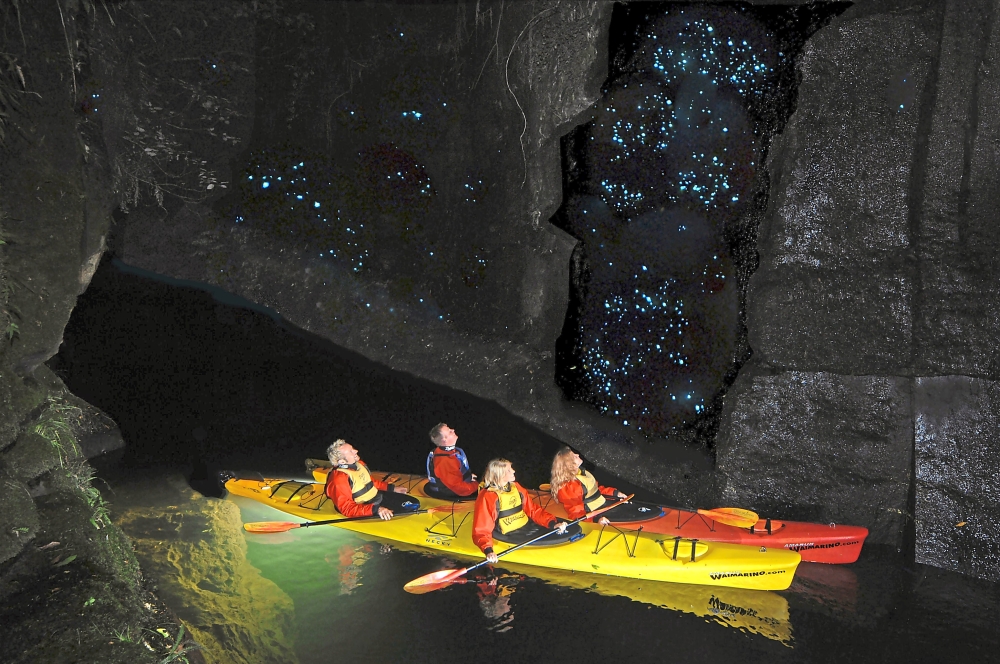 A kayak tour to see glow worms is a truly unforgettable experience. — Waimarino/Tourism Bay of Plenty

Having left our smartphones and electrical devices on shore, we are able to experience all this without any distraction. And for a while, our group of eight – on four kayaks – stay in absolute silence while marvelling at the natural beauty.

The Coromandel region, about two and a half hour’s drive away, also offers many natural hideaways. What is pleasantly surprising is how many of these places are free to enter.

At the Karangahake Gorge, there are several stunning trails to explore. Walking past gushing rivers and old tunnels will reveal plenty of gold mining history and untouched greenery. 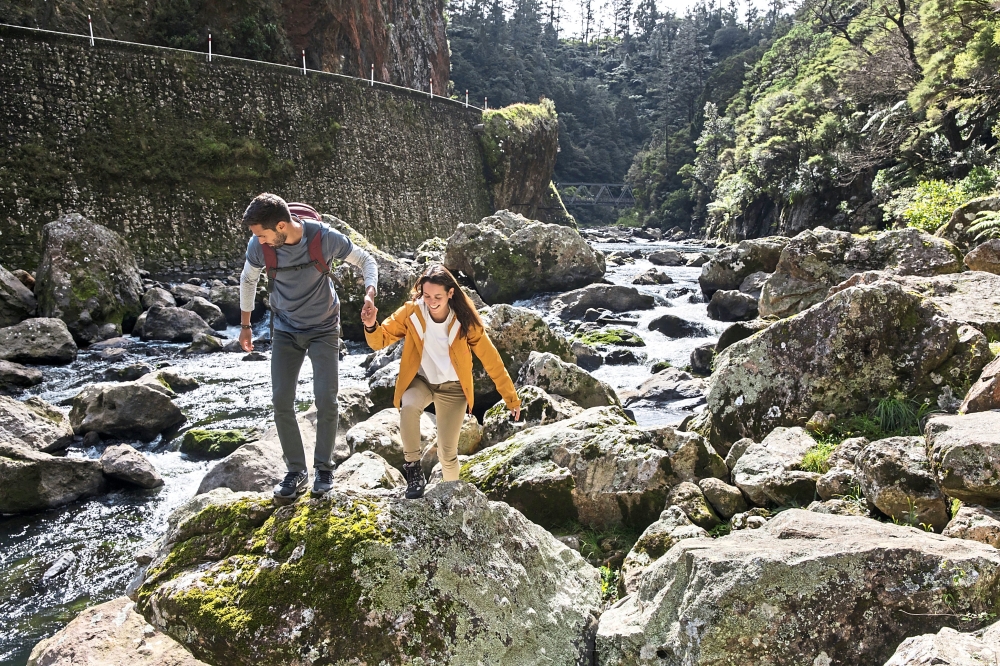 For a close encounter of the furry kind, the nearby Bullswool Farm Park lets one get up-close with rare-breed farm animals. The beautiful farmland is great for families with young children as many of its activities are catered for the little ones.

Elsewhere, the Cathedral Cove and much of Coromandel’s magnificent coastline is a must-do at the region. The Hahei Explorer company takes visitors on a friendly boat tour through massive sea caves and marine reserves. 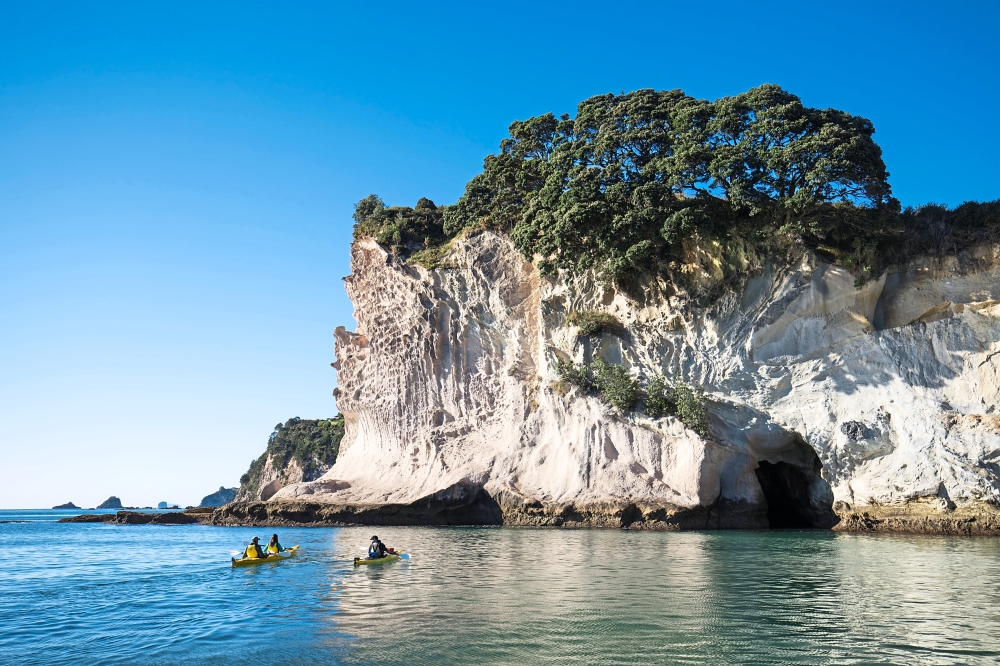 The Cathedral Cove and much of Coromandel’s magnificent coastline can be explored on a boat tour when you’re in the region. — GRAEME MURRAY/Tourism New Zealand

Another thing one will come to realise about New Zealand's North Island is how sparse everywhere feels. Many of the places of attraction are usually devoid of large crowd that’s synonymous with tourist traps.

Like at the famous Hot Water Beach, I arrive to find a deserted, albeit beautiful, little beach. Although, I must admit it’s deserted because I have gone at the wrong time (the geothermally heated spring is only accessible during low tide). But maybe that’s all you need to experience something life-changing – a little nice and quiet.