Will flying taxis become a reality in Malaysia?

Flying taxis is set to become a reality by 2030.

Flying taxis will no longer be the stuff of science fiction by 2030 and will dramatically change the global tourism industry.

Airspace above cities is becoming increasingly valuable as the concept of “pilotless flying vehicles” is becoming more of a reality, according to data analytics company GlobalData. This will potentially affect the tourism industry as travellers flock to the early adopting countries to take a first-hand look at the new technology.

GlobalData travel and tourism analyst Laura Beaton said many big companies are already competing for market share in this potentially lucrative space. Some corporations that have come forward with designs include Vimana, Uber, Lilium, Airbus, Volocopter and Ehang.

“People are happy to travel in helicopters so this is just the next step forward in the evolution of futuristic travel. Flying passenger drones have already been designed and tested so it is just a matter of time before these become commercial. By 2030, there will certainly be the option in some cities to ride in an autonomous vehicle through the air,” Beaton said.

Beaton added that the arrival of flying taxis will be a major disrupter. “Traditional taxi companies are already struggling to keep up with the likes of Uber and Lyft; drone taxis are likely to become even more of a disrupter,” she said.

This is in comparison to the US$9.28 (RM38) cost per rider, per 1.6km of travelling in a helicopter, according to Uber. Once the technology is deemed safe enough, passenger drones could become a substitute for piloted helicopters, especially as their environmental impact is likely to be lower.

Drone taxis from US-based firm Vimana Global are expected to debut in Dubai next year and the US has also licensed testing of these futuristic vehicles. Should Dubai become the first place to make these vehicles available to the public, visitor numbers are likely to soar.

Will flying taxis become a reality in Malaysia? Dubai may lose 30% of hotel jobs on virus 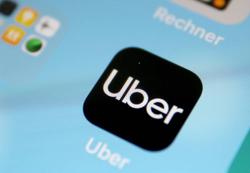 Uber and Lyft increase traffic, pollution – why do we let it happen?