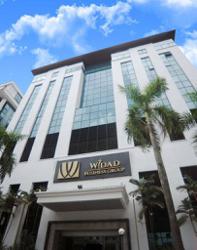 During the recent school holidays, this writer had the chance to visit Perlis after a 20-year hiatus.

The last visit there was not for a vacation but as an archaeological student involved in excavation works in Kota Kayang. Today, the site has become a historical complex that houses the Kota Kayang Historical Museum.

For any student of archaeology, an opportunity to excavate at a historical site a priceless experience.

This recent visit to the site, some 5km from Kuala Perlis, brought back memories of the two-week excavation in 1998.

The excavation was at the time headed by the late Dr Mohd Supian Sabtu, the Archaeological Curator of Lembah Bujang in Merbok, Kedah.

The two-year excavation from 1997 to 1998 unearthed the site of a former palace known as Kota Indera Kayangan, where the Kedah-Perlis royal family used to reside.

This is based on the historical artefacts found in the area, particularly the tomb of Sultan Dhiauddin al-Mukarram Shah 1 (1661-1687).

The greenery set against the backdrop of limestone hills gave the Kota Kayang Museum a certain beauty.

The museum that stood on the ground of the former excavation site left nothing of the trace of the muddy paddy field it once was.

Although, I had the chance to follow many other excavations, none were as challenging and exciting as the one in Kota Kayang.

Broken pieces of earthenware were found in abundance at the site.

According to a Kota Kayang Museum personnel, Zaidi Harun, what was formerly the excavation site has been turned into a parking lot for museum visitors. Kota Kayang was built on an area surrounded by hills, among them Kayang Hill, Kubu Hill, Lambong Panah Hill and Menara Hill. It is located within the sub-district of Kayang, near the oldest man-made canal in Peninsular Malaysia. The canal used to be the transportation route connecting Kota Kayang, Kuala Perlis and Alor Setar.

Research on the excavation site revealed that more than 350 years ago, a river flowed into the area. However, its location has today shifted some 100m away from the museum building.

Once an administrative centre, Kota Kayang was strategically located as it stood on the foot of a limestone hill which doubled up as a fortress against enemy attacks, said Zaidi.

The name “Kota Indera Kayangan” that is given to Perlis is believed to have been derived from the term “kayang”, used by Sultan Dhiauddin Al-Mukarram Shah, who depicted the city as “kayangan” (paradise).

The museum, built in 1999, was designed based on the long-roofed Perlis-Malay housing architecture. Its walls are made of bamboo strips featuring the “kelarai” (wickerwork) usually found in traditional Perlis-Malay homes.

Visitors will not only get to view artefacts on the history of Perlis but a chance to enjoy the breathtaking landscape of the surrounding limestone hills. They can also visit the other attractions within the area, including Gua Kayang and the royal well. There are six galleries within the Kota Kayang Museum namely the history gallery, archaeology gallery, royal gallery, culture gallery, weaponry gallery and the Perlis Menteri Besar gallery.

The gallery features over 300 collections including those of musical instruments, weaponry, agricultural tools, traditional games and carpentry.

The archaeological collection showcases records of archaeological finds in Perlis and photographs of the excavation done in Kota Keran, Kota Indera Kayangan.

Ancient wooden boats on display at the Kota Kayang Museum.

Aside from the artefacts found in Kota Kayang, other artefacts on display include earthenware from the Neolithic era that were used during funerals at the time.

There is also a special collection that features, among it, the Letter of Appreciation from the Chulalongkorn King to the Perlis ruler, Raja Syed Hussein.

Although the museum has been opened to visitors since Sept 2001, not many know of its existence or have come to visit it.

This was perhaps due because of its location, which is 7km off Kangar town, said Zaidi.

The museum fell short of its target of 60,000 visitors last year, with only 53,132 people visiting last year.

“We have planned five programmes this year to promote and encourage more visitors to the museum so that we can reach the target of 60,000 visitors this years,” said Zaidi. — Bernama