Countryside amble for a cause

The journey begins : David Atthowe (left) and Yusep Sukmana in Tanjung Piai, the southernmost tip of mainland Asia and the starting point of their epic walk.

From getting attacked by ants and being welcomed by a marching band, to receiving magical blocks of wood, it was all part of the adventure for a pair of travellers from England and Indonesia.

IN 46 days we completed an epic 1,110km walk through the length of Peninsular Malaysia. Our project is called Nomadic Lion and we are a two-man team: David Atthowe from Norwich, UK and Yusep Sukmana from Ciamis, West Java, Indonesia both aged 24.

Our journey started in the southernmost tip of mainland Asia at Tanjung Piai, Johor on Jan 11 and finished on Feb 27 in Wang Kelian, Perlis.

Our route took us through Ayer Hitam (Johor), Melaka, Port Dickson and up to Kuala Lumpur. From there we went along the Kinta valley towards Ipoh, across to Bukit Merah (Perak) and thence to Kedah and Perlis.

We have a great passion for nature and we want to walk through various countries to raise awareness about the environment and scenic beauty. We chose Malaysia as our first project as it has the world’s oldest rainforests. 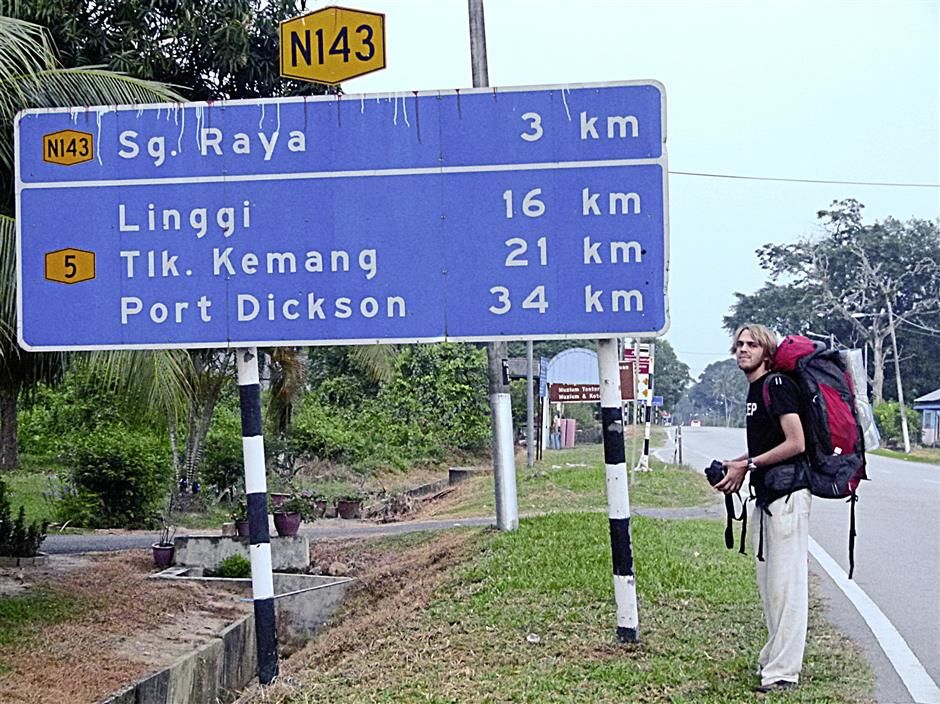 The inspiration for our journey is Mahatma Gandhi, who taught that we should live a simple life and do what we can to help others and protect nature.

He famously made a long Salt March where he walked 390km in 24 days from his home near Ahmedabad to the coastal town of Dandi, to protest the British Salt Tax which had made it illegal for workers to freely collect their own salt from the sea. Along the way, he was joined by many Indians and the campaign created a lot of awareness about (economic and political) independence.

Another goal of our project is to inspire young people to walk more. We see so many young people today spending most of their days sitting in front of screens, not getting any exercise all day. We want to inspire people to make walking a part of their daily routine, just simply walking to school or to work could make a big difference.

A normal day during our journey started at 5:30am. We would walk for five hours, take a few hours rest at midday, and then continue for another three hours until 5pm. The early starts were meant to avoid walking in the midday heat. Our main solar protection were hats and suncream.

We completed the entire journey wearing just a simple pair of sandals – if we wore walking shoes our feet would get too hot. Actually we wanted to walk bare-footed but we decided we were not quite ready for that yet.

We had a rough start to our journey for the first few days around Pontian, Johor. We didn’t get much help and had a difficult time finding a place to stay. One evening, after walking 35km, we arrived in the last village where nobody would let us stay. It forced us to camp at a oil palm plantation. But we had to move our camp twice that night because we got bitten by ants! After that, everybody warned us against sleeping in oil palm plantations because of the risk of snakes – and ghosts.

Apart from our oil palm “hotel”, during our journey we slept in many places; suraus, Sikh and Thai temples, friends’ houses, under trees and even on the beach.

As word spread via social media of our quest, many people got in touch with us to offer accommodation or a meal. 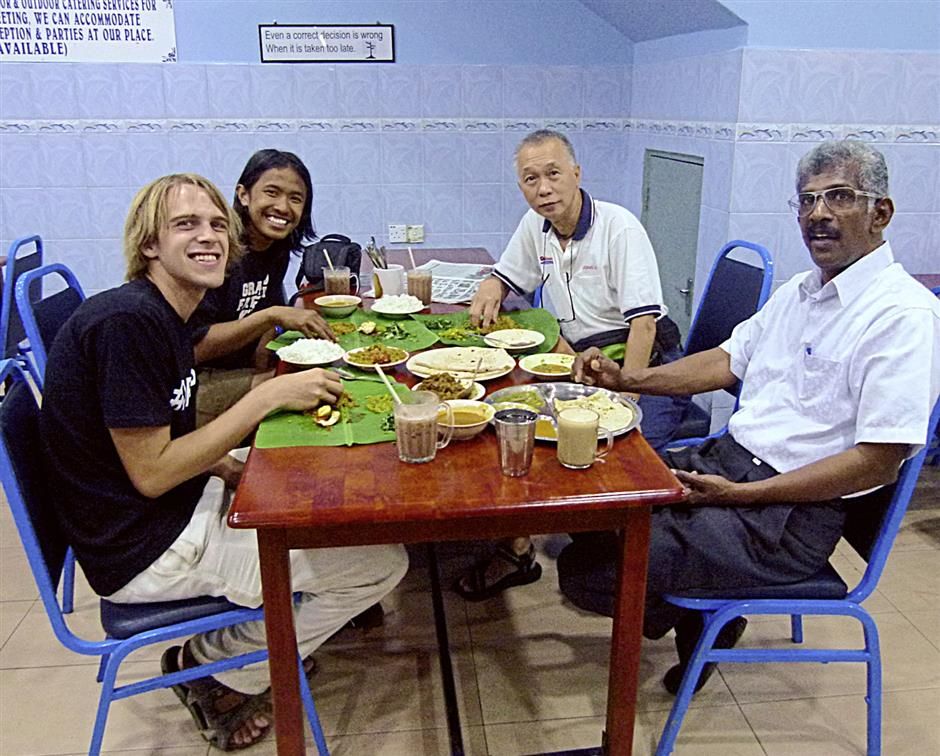 The duo were fed well and shown incredible hospitality by Malaysians.

We were lucky to get support from Malaysian hiking groups on Facebook. David Chan, a trekker, came from KL to meet us and show us around some hidden sights near Ipoh. We were given places to stay, lots of food and great hospitality by a group of photographer friends from Ayer Hitam through to Malacca.

One of the highlights of our journey was the incredible hospitality offered by the Sikh community. We stayed in five Gurdwara’s (Sikh temples) along the way, and every time we were also given the most delicious homecooked food. Indeed, a Gurdwara offers a traveller a place to stay and a warm welcome regardless of your religion or race, such a refreshing thing to find in the modern world.

Along the way, we got to try many different foods from each state. We both enjoyed simple everyday food, like nasi lemak for breakfast, nasi campur for lunch and roti canai for dinner. One thing that really amused us was how food-obsessed many Malaysians are. Whenever we asked somebody about the route from one place to the next, they would always tell us about what food we could find there! It seems there is a real culture of food tourism here, with people travelling long distances just to eat certain famous dishes.

Walking allowed us to travel at a slow enough pace to really get a feel for each state we visited. We could talk to people in every village along the way and learn about the history of each area. We were both surprised by how much of the country is covered by oil palm plantations, especially in the south around Johor and Negri Sembilan. 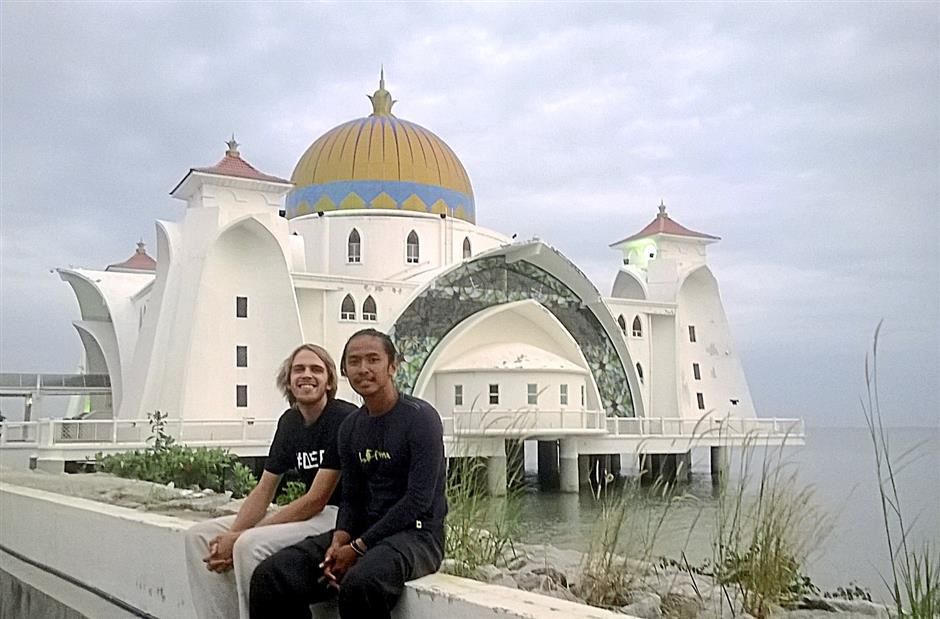 Posing for a snapshot at the Malacca Straits Mosque.

During the journey we found many small hidden gems. One of our favourites was around Tanjung Bidara, where we walked along a beautiful seaside road that went through some traditional Malay fishing villages, with many beautiful wooden houses and very friendly people. At the end of the road we found a lovely clean beach where we watched the sunset and camped for the night.

Another highlight was at UiTM Arau, Perlis where we were greeted by the rector Datuk Dr Ahmad Redzuan Abdul Rahman, 100 students and a marching band. It felt like a graduation day! (We also made a presentation about our expedition.)

We used trunk roads and small village roads all the way from the South to North which ensured we passed through many villages. It took a lot of local help to make sure we didn’t get lost and always had enough water for the journey.

Near the start in Johor, there were long stretches (about 30km) where all we would see were plantations. We were also taken aback to find one jungle or civet cat as roadkill about every 100km of our walk through Johor and Negri Sembilan. It was always in areas that had recently been deforested. 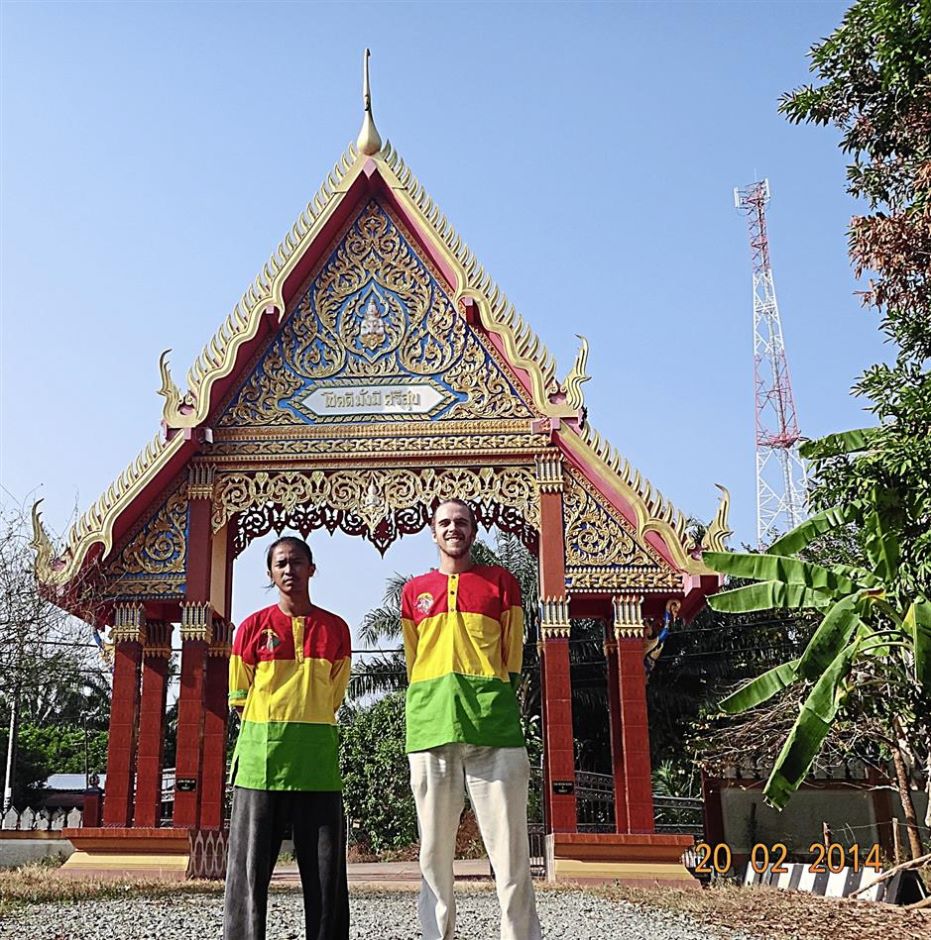 The duo slept in many places like Sikh and Thai temples, at friends’ houses, under trees, on the beach and even in oil palm plantations.

The first couple of weeks of our journey, we were perplexed about the bad stench as we were walking along. Eventually, we realised it was coming from the heavily polluted waters that we were passing. Although some people wanted to blame the local villagers for their “ignorance” in littering, it seemed that it was always near plantations that we found the worst-smelling waters.

We had two backpacks for the journey; one weighing just over 20kg and the other 12kg. We carried two tarps and a mat so we were always ready to camp anywhere. The other three most important parts of our kit were a mosquito net, two parang (for security) and a big herbal medical kit.

The big backpack was mostly filled with electronics that we needed to document the journey such as a camera, camcorder, tripod, laptop and all the chargers. My laptop was very heavy (nearly 2kg including all the accessories) and for our next project, we will definitely leave this out. We would love to get something more portable such as a tablet to document our journey and are seeking sponsorship help on this.

We designed our own bright red, gold and green shirts for the project. These are the colours of the Rastafarian teachings to live a simple, natural life, in harmony with, rather than against, nature.

I originally studied aquaculture and spent six months working in a fish farm at Bukit Merah in 2012. I then spent two years working in different places around the world before settling around South East Asia where I have spent the last two years. 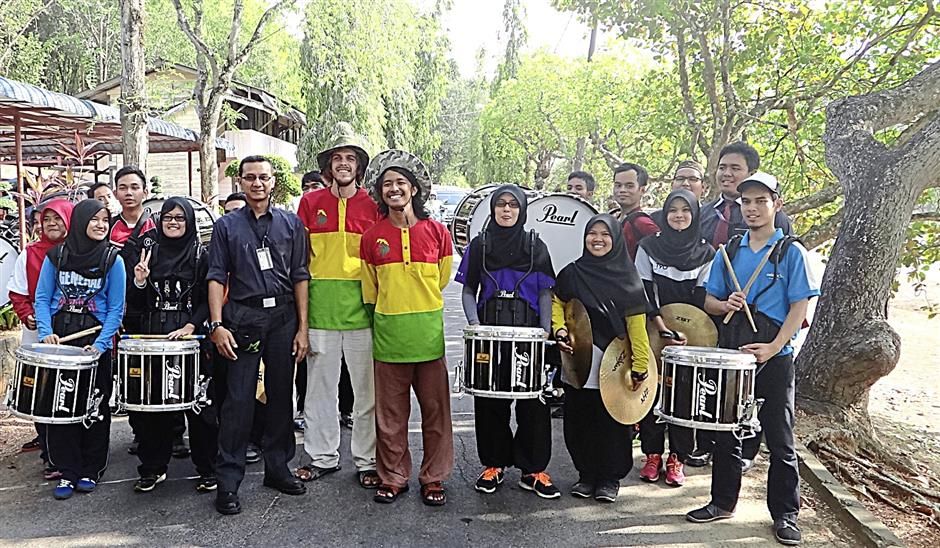 At UiTM Arau in Perlis, David and Yusep were greeted by a marching band!

Yusep is still studying tourism at STBA (the Foreign Languages High School) in Bandung and is hoping to finish this year. He is originally from a small village near Ciamis in West Java, an area full of natural beauty and surrounded by big mountains. It was up one of these mountains where we first met.

We have never made a journey like this before and learned many lessons the hard way along the route. Just before the expedition, I had a job delivering leaflets in Australia that required me to walk 50km a day. Yusep, however, had never walked long distances on flat ground before and the first couple of weeks were a struggle for him.

We have big plans for the future and see this first walk as just the beginning for Nomadic Lion. In August 2014, we plan to walk all the way through Sarawak and Sabah. We are seeking sponsors who can help with this for this and other future projects.

To learn more about the duo’s walks, visit www.nomadiclion.com or search “Nomadic Lion” in any social media.

Countryside amble for a cause