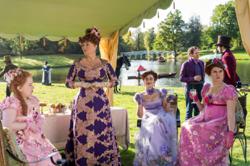 In China, it's not just female celebrities who are faces of international beauty brands anymore, men are stepping up to the spotlight now more than ever, and they're not targeting their own counterparts.

It's not something new as it's been going on for the past few years where young Chinese male stars are chosen to endorse popular brands.

They are known in China rather disturbingly as "little fresh meat", which is a term used to describe the younger generation of Chinese male idols with a softer masculinity. The origin stems from manga, anime, J-pop and K-pop from Japan and South Korea.

According to an article from China Film Insider, CBIS Case: Male celebrities give beauty marketing a makeover, three male celebrities saw a surge in popularity this summer.

They are Li Xian, the male lead in the romantic TV series Go, Go Squid! and Xiao Zhan and Wang Yibo, stars of martial arts/fantasy series The Untamed.

Xiao and Wang were already popular, being in well-known boy bands X Nine and Uniq. For Li Xian, his performance in Go Go Squid! marked a breakthrough for the actor.

It’s not suprising as these male stars have an extensive female fanbase which works to pull in sales for these beauty brands and generate hype.

In terms of social media rankings in China, it is the male celebrities that are at the top spot.

Getting a trending star to front a brand can see great returns. For example, Estee Lauder’s official Weibo post on its collaboration with Li Xian was shared more that 430,000 times with more than 30,000 comments.

The article also said that a report by Yingxiao Huabao showed that 23 beauty brands (mostly international) have signed 25 male celebrities this year, with the majority born after the mid-1990s.

From January 2018 to the present, in rankings of top celebrities by fan activity, male stars commanded 36 of the top 50 spots. Only one female celebrity ranked in the top 10 list as of late September.

It stands to reason that given all that, these male celebrities will continue to be the main picks in beauty endorsements.

Also known as Sean Xiao, the 28-year-old artiste is the China brand ambassador for Olay and Estee Lauder Asia Pacific (makeup and fragrances)

The 22-year-old actor and singer is the China brand ambassador for Shu Uemura and Origins.

The 28-year-old is the Asia Pacific brand ambassador for Estee Lauder (skincare and makeup).

The 28-year-old singer and actor is the first Lancome Asia Pacific brand ambassador.

The 28-year-old singer is the first Asia Pacific brand ambassador for M.A.C. He was previously the brand’s China ambassador.