Many fans have asked whether the same-aged musicians are a couple, but the two said they are just high school friends. Photo: ANN

YouTube is full of videos of cover songs, but not all amateur artistes win over viewers.

Co-ed duo Darlim&Hamabal however, was special from the start. When the two debuted on YouTube in December 2017, many saw their potential and predicted the duo would succeed.

Darlim&Hamabal soon grew to become one of the most distinguished artistes in Korea’s YouTube scene, garnering more than 184,000 viewers in a year.

The team also made a name for itself among global music fans by singing J-pop and popular movie soundtracks.

“We never expected that we would gain such popularity on YouTube in such a short time,” Hamabal, the producer of Darlim&Hamabal, said in an interview.

Many fans have asked whether the same-aged musicians are a couple, but the two said they are just high school friends. — ANN

Darlim&Hamabal, often called “Dar-ma-bal,” is a YouTube channel through which the two musicians share their favourite song weekly. When Darlim sings in front of the camera, Hamabal sits behind and listens to her sing. So far, the channel has featured 51 songs.

The duo’s genres range from K-pop to pop music to movie soundtracks, but it mainly covers J-pop songs.

Its version of Kenshi Yonezu’s Lemon has amassed nearly three million views as of Dec 23, while covers of Gen Hosino’s Koi and Yonezu’s Uchiage Hanabi recorded 1.9 million and 997,000 views respectively.

Viewers say the harmony of Darlim’s clear voice and Hamabal’s talent in arranging songs are the biggest reasons for their explosive popularity.

Many J-pop fans say Darlim’s voice is perfect for expressing the soft or bright mood of Japanese songs.

Many fans have asked whether the same-aged musicians are a couple, but the two said they are just high school friends.

Darlim has pursued music her whole life. She grew up with 1990s hit songs by Kim Kun-mo, Wax and Big Mama, and ended up majoring in vocals in college. She also worked as a chorus singer and recorded songs for TV commercials.

She once trained to become a K-pop idol at an entertainment company, but quit shortly.

“First of all, I was not a good dancer. Vocal trainers also criticised my voice, saying I must change my vocal style to sing K-pop songs well,” Darlim said.

While going through a difficult time, Darlim had a desire to sing her favourite songs and share them with others.

Darlim told Hamabal – who had previously worked with her on recordings -- about her idea of launching a YouTube channel.

“I welcomed her idea when I heard it, as I hadn’t had any chance to show myself to the public while working as a music arranger,” Hamabal said.

Right after Hamabal was discharged from his military service, the two started to shoot videos. Just as Hamabal had wished, he now draws massive attention from viewers by appearing on every clip in his signature hippo-face white mask.

According to Hamabal, it takes a full week to make each video. Unlike others who add their voices on existing music recorded, Hamabal composes the MR (music recorded) from scratch to find the perfect melody and rhythm for Darlim.

When Darlim covers a male singer’s song, Hamabal changes it to a female key. If a song is too high pitched, he makes it softer and smoother to match her voice.

“I always try to make songs sound comfortable to everyone’s ears, even if they listen to it for a long time. As Darlim’s clear voice makes others feel comfortable and relaxed, it goes very well with my MR,” Hamabal said.

Darlim also praised Hamabal’s talent in arranging every detail of each song.

Hamabal, who majored in singing and songwriting in college, said he has long been a fan of Japanese jazz fusion band T-Square, known for their precise and perfect instrument performance.

Pressure to be perfect

With the duo’s channel gaining attention, Darlim said she often feels pressured to become a better singer. She once ran out of the studio in the middle of a nighttime recording session because she kept failing to meet her own expectations.

“While sitting on a street, crying, I thought to myself, ‘What has happened to me?’ I started YouTube to enjoy music, but at the time, I couldn’t sleep enough and only worked (to record the song every week.) I suddenly realised that all I have to do is to be myself and sing in my style,” Darlim said.

Through the experience, Darlim said she learned how to set herself free from the pressure to be perfect and enjoy her work again.

These days, she rests if she faces difficulties in recording. As she regained her confidence, the quality of the videos also improved.

Among the 51 songs that the duo has covered, 38 are Japanese songs.

“When I was in college, I struggled to find one specific colour of my voice. Many of the professors and vocal trainers told me that my voice is in the middle of somewhere that can’t perfectly fit in with any type of music,” Darlim said.

However, after she fell in love with a song by Japanese artiste Miwa, she realised that her voice matched quite well with J-pop.

“I began to listen to more J-pop songs and decided to sing such songs for my career,” Darlim said.

Mood for every song

The singer carefully selects clothes, accessories, makeup and hairstyles depending on the mood of each song. When she covered Koi, she wore an orange striped shirt as well as hairpins and lipstick that matched the song’s bright mood.

To authentically deliver the lyrics, she pays careful attention to her facial expressions as well. If she sings her favourite lines, she looks at the camera just as if she were looking at viewers and talking with them.

“I try to memorise all the lyrics, as it could get boring if I look at the monitor and read the lyrics on it all the time,” Darlim said.

After the duo decides what to sing next, Darlim said she listens to the song literally all day.

Besides J-pop, Darlim and Hamabal recently covered K-pop songs like Twice’s Yes Or Yes, and movie soundtracks such as A Million Dreams. To celebrate Christmas, the duo covered Ariana Grande’s Santa Tell Me.

“As fans from all around the world are watching our channel, we wanted to sing songs in their languages in return. We cover every song we like these days,” Darlim said.

“We hope to be able to release an album with songs that we wrote by the end of 2019,” Hamabal added. – The Korea Herald/Asia News Network 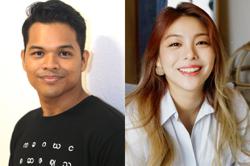