'The secret to making it as an artist is to keep working persistently. Keep knocking on doors, keep busy,' says Donald, pictured with his work Turbo Chat (mixed media on canvas, 2012). Photo: The Star/Azman Ghani

Ask most artists how they got started, and their answer will probably be at an art school or in a studio.

Self-trained artist Donald Abraham, however, gained knowledge about the art world on the streets.

Donald, a hip hop music fan and skateboarding enthusiast, honed his skills through the school of the spray can (graffiti) and designing hip cartoons on (skateboard) decks.

As time went by, however, he went from painting on walls to creating paintings that hung on walls.

Yang Lain-Lain, his first solo exhibition, is a testament to how far the Beaufort, Sabah-born artist has come.

The show is on at the Suma Orientalis gallery in Petaling Jaya till Sept 9.

Donald, the fourth child of an ex-policeman and a housewife, first picked up art from local comic magazine Gila-Gila.

Being three hours away from Kota Kinabalu meant that Donald had a relatively quiet smalltown childhood. Yet, as a young man, his head was already bursting with ideas on cartoons and imaginary characters.

“I used to have problems with learning to read. My mother used to buy Gila-Gila to help me. I would read them from cover to cover, and start to copy the faces inside.

"I’d draw the faces, cut them out, and stick them on the walls. I don’t know why I did that,” recalls Donald, 37, with a chuckle.

Apart from art, Donald also fell in love with skateboarding – he even participated in the ESPN X-Games in 2001.

Skateboarding, he says, is the reason he moved to Kuala Lumpur in 2001.

In KL, the young Kadazan-Tatana artist had his share of adventures, working in an advertising firm and as a debt recovery officer, among other things. Originally, he planned to open up a company dealing in solvent inks – but the plan fell apart after his partner suddenly ran away.

“I had the talent, he had the money,” says Donald. “But without the money, what can you do?”

With nothing left to lose, Donald started to move into murals and painting. At KL’s Central Market, he would meet his mentor – the veteran painter Yusof Gajah. Donald reveals Yusof pushed him to paint as much as he could.

Since then, Donald has emerged as one of the country’s most exciting urban artists, and he has been featured in many group exhibitions, including a duo show Galactic Highway in 2015. His commissioned murals have been seen in places like Publika and the National Visual Arts Gallery, while he also got an opportunity to “pimp up” a German luxury car with street art in 2015.

Donald is also no stranger to collaborations. With the Foursomekl collective, he worked on commercial commissions and mural work alongside Ahmad Fauzan Fuad, Mohd Anuar Mustapa (Fritildea) and Orkibal.

His Yang Lain-Lain exhibition, which contains 18 works, is set up in an accessible way to revisit his early days (getting accustomed to life in the studio) right to presenting his new works.

"It's a daunting challenge to go down the gallery path. But it's a natural career progression," says Donald.

The exhibition, curated by Sophia Shung, encapsulates his growth as an artist, with paintings done between 2012 and 2018.

Donald is also part of the group show Hidup Bersama: Malaysia@55 at KL's Balai Seni Menara Maybank, which runs till Sept 20. In that show, he is exhibiting three paintings and a set of six small works.

“At this point, I’m humbled to find my works in a gallery. A solo show, of course, is a bonus. This Yang Lain-Lain exhibition is a look at what I have done in the past few years. It’s a mixture of a journey of adulthood and the confidence I have built as an artist,” says Donald.

“To me, it’s also exciting to push the mainstream art scene's boundaries,” he adds.

Donald’s distinctive style is evident: all of his pop art-inspired works feature a crowd of characters, depicted in vibrant colours. Each work, he reveals, is a personal piece illustrating a part of his life – past and present.

In Turbo Chat, Donald captures a time when he used to live in a “skate house” with all his friends, who would all gather and hangout.

Green Monster has a pointed slant, reflecting his thoughts on current affairs. In Three Scenarios, a triptych, you get the three stages of life: childhood, adolescence and adulthood. The lined backgrounds in each work “gets more and more complicated” with the passing of time.

Urban life seems to be at the heart of What Doesn’t Kill You Makes You Stronger, a more soulful work discussing friendships and trust.

In homage to Donald’s beginnings in graffiti, the artwork details at this exhibition are actually scribbled on the walls, next to each painting.

Not all of his paintings are signed, but look out for his graffiti tag “Yak” in his works.

Be it the studio or a street art commission, Donald’s creative process remains as straightforward as it gets. He sketches an idea, maps the artwork direction and tries to keep that rawness flowing right through the finished work.

“I like to stay with my sketches. I sketch a lot, and some of my selected characters will go into the painting. I like to expand on the characters and stories. For my colours, I only choose them on that day. If I only have black and white, then I’ll use only black and white,” says Donald. 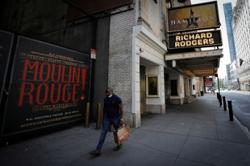 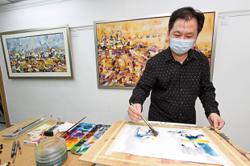 Seeing Penang in an artistic light