Cometh the hour, cometh the Antman ... and his giant ant. Liew ‘rides’ with his creation at a cinema.

Gary Liew desperately and hurriedly attempts to spray paint a helmet placed on the floor of a five-foot way, popular as a paint workbench. Meanwhile, younger brother Tim waits for him in the “getaway car”, mum’s conspicuous yellow Hyundai Getz. After all, homes are rarely equipped for industrial-type work.

So, like a scene straight out of a comedic movie, the brothers then flee, the scent of paint wafting through the car, the twosome seeming more like a Terence Hill/Bud Spencer combo than a Paul Newman/Robert Redford tag team. And that’s exactly how the older Liew has approached life and its challenges– necessity is the mother of invention.

From a young age, Liew was bitten by the creative bug and endeavoured to apply himself to his artistic pursuits ever since, one which has led him to designing props.

He was earning his wings as a wee lad immersed in Disney Channel’s Art Attack, and even learned art from a teacher after school.

“I have used what I picked up from that programme to this day. I guess, in a way, art has always been in my DNA,” revealed the 29-year-old recently, whose early ventures included designing kolams during auspicious Hindu occasions, too.

His love for display items, like artefacts in museums, and pieces in showrooms, led him down this road of creating things on his own, because “... that stuff is expensive”.

And the ticket out of having to pay so much for the real thing was to simply make his own, which involved plenty of improvisation.

“I’ve always thought outside the box. People have viewed some of my ideas as stupid, but stupid ideas will still teach you something,” he said, almost sagely. 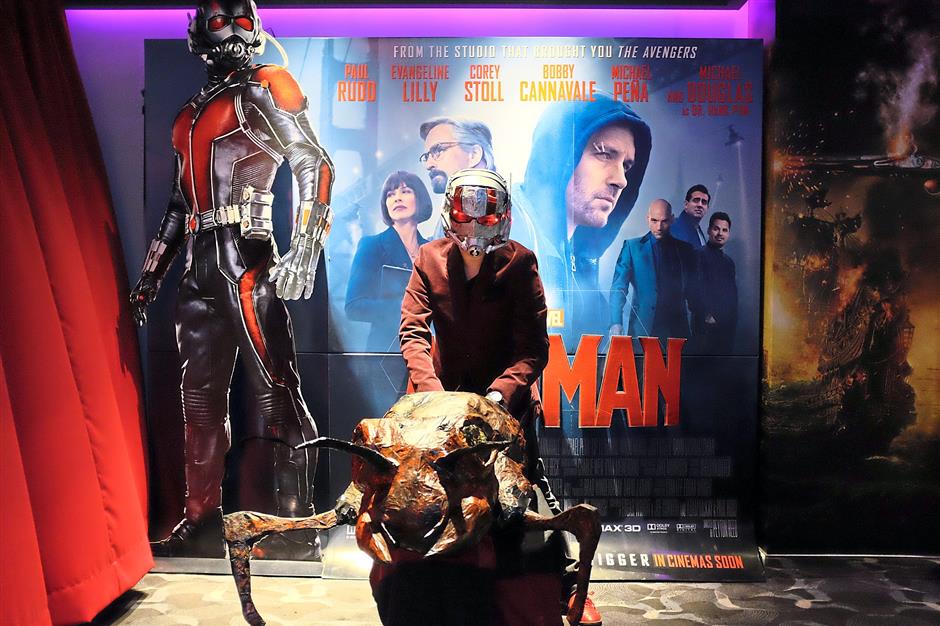 Cometh the hour, cometh the Antman ... and his giant ant. Liew ‘rides’ with his creation at a cinema.

One such idea that was viewed less than ideally was his design of the ghostly Dementor (of Harry Potter fame) for a school Halloween party. “I’m old school ... I come from the (Steven) Spielberg school of thought. I don’t do visual effects (CGI), I work on practical effects (solid material).”

His Dementor was realised by cutting up garbage bags, filling them with cotton for shape, hoisting it up to the venue’s ceiling and using wires to create movement. Simple and almost old school, yet highly effective.

However, he has certainly embraced the times, which is why he relies on computer technology for enlarging work, to pick out fine detail. Liew exudes this refined attention in his design of firearms.

“I go to Toys ‘R’ Us to see their guns ... to check out the competition.” For his pieces, different plastics are combined to great effect.

Recurring queries of “Where can you get it?” was endorsement for the Petaling Jaya native to know he was on the right track.

“My friends asked about them, and movie sets approached me, too. My weapons look authentic, so people think they’re real,” said the fan of the original Star Wars trilogy, Jurassic Park, 90s sci-fi and Justice League.

His choice of design simply comes down to what interests him, with a topical twist thrown in.

In wanting to create something 3D for the movie Antman, Liew designed the front half of a giant ant, replete with controllable internal wires, which allowed it to sway from side to side. The “living creature” was placed beside a lame standee at a cinema to popping effect.

“I always want it to be one level more ... like the light inside a helmet, or the moving ant, and even the LED lights I put inside my Dr Strange medallion.”

“That means I should be able to do some sewing, soldering, painting, detailing, and electronics work,” shared the man who sounds like he comes off the catalogue of the ideal husband.

Not long from when he started, Liew realised patience was going to be a virtue. “Some things can take months ... even small things.” In indulging his sense of perfectionism, weekends often become work days.

Apart from sibling assistance in the getaway scenario, he is a one-man operation.

“I might have friends who are crazy enough to join me on some projects, like in Myth Busters or something, but I work on my own,” said Liew with a straight face.

He keeps the items that hold sentimental value, but gives the rest away. “This kid liked my Iron Man helmet, so I gave it to him,” he related the story of a lucky recipient.

Liew’s artistic pursuits aren’t the only thing that define him. He is the founder of Street Feeders KL, an NGO he started with a group of friends in 2011, which feeds the homeless. His mum’s selfless work at a soup kitchen in Bukit Nanas inspired him to follow her example.

“We have expanded over the years, and now, there are affiliated groups catering to eight cities around the world,” said the former Stella Maris KL student, listing KL, PJ, Seremban, Melaka, Penang, Dublin (Republic Of Ireland), Seoul (South Korea) and Vizag (India) as recipients of the organisation’s generosity.

Art and social conscience have not been mere areas of interest – they have become a way of life for him.

In fact, he has found a novel method of merging the two: “I wear some of these props to movie screenings, which we take the homeless people to.” And the joy this elicits is enough to keep him inspired and content for a long time to come. 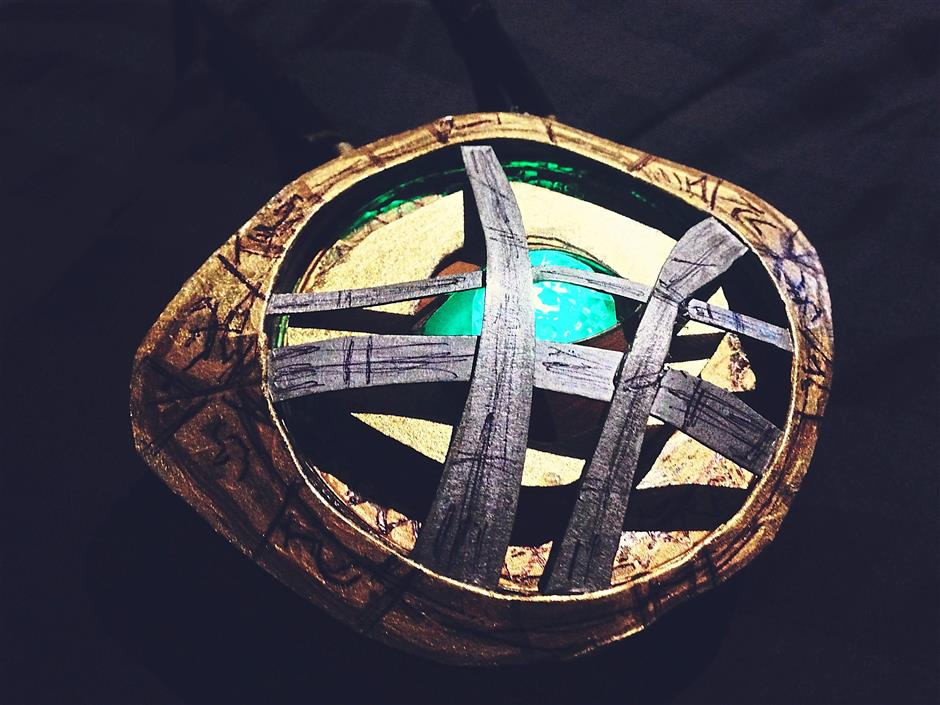 From early on, Liew knew that for things to look realistic, the devil had to be in the detail, as testified in his Dr Strange medallion.
Article type: metered
User Type: anonymous web
User Status:
Campaign ID: 1
Cxense type: free
User access status: 3
Subscribe now to our Premium Plan for an ad-free and unlimited reading experience!