Even if it was just for a few hours, Star2’s Great Team Building Weekend showed the whole can be greater than its parts.

I HAVE worked at The Star for almost 23 years, and in all of that time, I have gained much experience and learned many things: how to write a newspaper article, lay out a page, take orders, give orders, work through public holidays, work day or night whenever news arrives, make conversation with just about anyone, respect authority or eat humble pie, speak in front of an audience, make friends, endure enemies ... the list is long and I am grateful for these lessons.

Yet, in just the last two years, I have met some of the toughest challenges of my working life.

Fate has found me and a bunch of other able editors helming a desk of over 50 people, and it seems that all the lessons I had learned thus far have been insufficient in empowering me to lead so many people who come from different backgrounds and have been thrown together to work as a team. Do this, do that: So we proved that we could take orders competently enough. --  Photos from GlobalKnox

I carry a copy of Dale Carnegie’s How To Enjoy Your Life And Job in my bag hoping to glean some miracle theory that will enable me to lasso the team, rustle ’em up and get them working in a type of tandem that leads to dynamic, inspired output.

Yet I find myself, every other day, crying in the stairwell of my office or the restroom or falling flat on my face every night, fatigued by the daily grind of just getting the pages out, putting out fires, being told off by my bosses, getting criticised by my peers and subordinates.

And so when one of my executive editors suggested our team go for a team-building exercise (thanks Brian!), I was game to give it a try.

I love going for training sessions of any sort – group hugs, life coaches, getting to the heart of the matter and letting it all out while singing Kumbaya. Brian was preaching to the choir, I didn’t need convincing, I was already gung-ho about it. Rhythm is gonna get you: Part of the team building session included a drum circle, where everyone got to play percussion instruments, sing and dance. You can then imagine my shock to find that more than half of the team absolutely DID NOT want to participate in any such activity that was going to rob them of a weekend, force them to (heaven forbid) share a room with a colleague and coerce them into “getting along” with all and sundry.

Journalists are a funny lot – the most gregarious beings one minute and most fiercely reserved the next ... and they like it that way, thank you very much.

But we persevered. Naysayers came and went, and the event was postponed more than once. But in the end, I am happy to say that on the last weekend of September, our team – 41 of us at least – survived two entire days of sleeping, eating, playing and working through a series of challenges put together in Port Dickson. A-maze-ing: This was one of our favourite activities, which required us to give up our silo mentalities and forge a new way of working together. Tennis toss: This seemed like an insurmountable task - we had to toss tennis balls into the air, flip the tarpaulin mat over, and catch all the balls again. And we did it! Obstacle course: When is the last time you had to move a ping pong ball from one person to the next without using your hands or letting it fall to the ground? No need for rocket scientists here, just a lot of teamwork.

The team-building session, entitled Top Team Experience, was organised by a group of facilitators called GlobalKnox and I am pretty sure that everyone came away with smiles on their faces.

Some of us were pretty chuffed that we managed to solve a math puzzle in record time, or tossed tennis balls in terrific style or discovered we had rhythm in the Drum Circle.

I think everyone was elated that we managed to build a trebuchet that could actually launch “deadly” water balloons! You can imagine the fun that ensued after said siege machines were built. Fire in the hole: Building a trebuchet that actually was able to catapult water balloons gave us a chance to exercise our living skills and then magically made us all kids again when 'war' was declared! All aboard: Through a series of fun games and challenges, we were encouraged to break down walls and learn to trust each other.

Don’t misinterpret me. Team building didn’t turn out to be a miraculous 36 hours. We didn’t return to work the next day one big happy family like The Waltons. In fact, we’re still as angsty and nettlesome as before.

But that weekend did do something for us, I reckon. It built on relationships that already existed, it opened our eyes to some trust issues we have with each other, it knocked the wind out of us and got us down and dirty in the Straits of Malacca ... ready to leave our egos behind in order to solve problems and come up with winning solutions – even if it was just to somehow collect sea water in a cylinder full of holes.

Every now and then, without consciously thinking about it, we worked together to get the job done.

And even if it was just for a few hours, the whole seemed greater than the sum of its parts. Aristotle would have been proud. 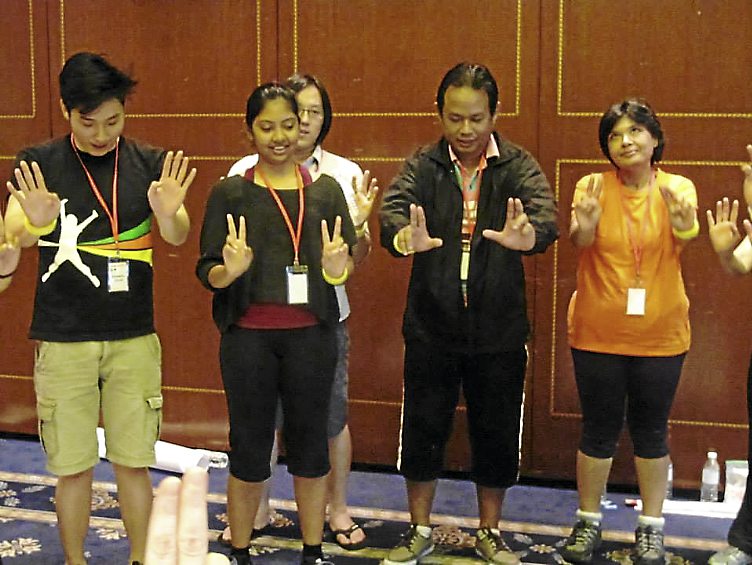 Just breathe: Learning how to stop and calm ourselves down with a secret 'macha' breathing technique, which usually ended in giggles all around.