Plastic garbage from tourists at a Greek beach. While this is the obvious form of plastic waste that we see, it’s the insidious, almost invisible form, mmicroplastics, that end up in the food chain and in our stomachs. — Bloomberg

More news to file in the great book of They Saw It Coming But Did Nothing this week.

The Environmental Investigation Agency (EIA) reported that the world must enact a binding treaty to curb the use of plastics. According to the international NGO, plastics waste is almost as big a threat to the planet as climate change. The average person is said to consume about a credit card worth of plastic every year.

How does this happen? Turns out that plastics never really break down. They just become smaller, so small that microplastics have spread into every part of our world. Microplastics are in Arctic snow, they’re in the food we eat and the air we breath. Even if you’re buying the expensive organic stuff, you can’t escape microplastics – we created so much plastic that it’s everywhere now. Like it or not.

And babies are said to consume many times more plastic due to drinking out of plastic baby bottles. Their plastics intake is particularly high because cleaning the plastic bottles at a high heat, as many concerned parents do to sterilise them, degrades the plastic allowing it to flake off into babies’ milk.

Of course, the rest of the planet isn’t better off with all this plastic either. Animals are frequently found dead after accidentally consuming plastics, and recently 20 elephants in Thailand died after eating plastics from a rubbish dump.

The EIA estimates that by 2040, the weight of plastics in the ocean could be greater than the weight of fish. That’s a little disconcerting.

The EIA and other experts agree that some kind of binding global agreement to limit the use and production of plastics is needed. Supposedly, 100 countries support such an agreement and it will be brought up at the United Nations Environmental Assembly in February and March.

Reducing the amount of plastics being made is the only solution.

Of course, the champions of plastics, namely the companies that produce the stuff, are saying otherwise. BBC News quoted the British Plastics Federation: “Plastic is a lightweight, safe, and energy-efficient material, and simply replacing it with alternatives can often have negative environmental consequences as well as ramifications for health and safety.

“The unfortunate scenes of plastic waste washing up in oceans around the world are a direct result of improperly managed plastic waste.”

Improperly managed plastics waste? That means we should recycle right? Yeah, in theory.

The important thing to remember about recycling is that it’s still an expensive process, more expensive than just producing “virgin” plastic. Until recycling is ramped up to a scale where it becomes more economically feasible, or taxes are enacted on new plastics, the current recycling infrastructure is inadequate to handle the amount of plastics being produced.

Contrary to what the plastics hypebeast wants people to think, there is no way to recycle our way out of this.

But the plastics people are right about one thing. Plastic is a very useful material. Lightweight, water-proof, doesn’t biodegrade (both its blessing and curse), and is necessary in certain industries. The medical industry comes to mind.

Plastics are very useful. But we have to start limiting our overuse of it. Go to the supermarket and count how many plastic containers there are. Go to a kid’s toy store and everything is plastic. We need to make sure plastic is only used in the industries where it is absolutely needed. And a binding international agreement could make that happen.

But will this binding agreement get signed and actually limit plastics production? If previous agreements on climate change are any indicator, nope, nothing concrete will come of this. Maybe an agreement will be signed that acknowledges plastics are a problem and we’ll take another look in a decade. That seems to be how we (don’t) make progress. Yeah, I’m cynical.

Is it time to panic?

Studies show when animals consumed too much plastic, their organs eventually shut down, which clearly isn’t optimal for life, and you can picture how that goes. In humans, we’ve had plastic around for a while, and people aren’t dropping dead. Yet.

That’s not to say we can’t get to a level of microplastics in our world where it becomes a major human health issue. Or it might be one already and we just haven’t figured it out yet.

In any case, look for us to do nothing about plastics until they’re literally killing us. That seems to be the way humans work.

Big Smile, No Teeth columnist Jason Godfrey – a model who once was told to give the camera a ‘big smile, no teeth’ – has worked internationally for two decades in fashion and continues to work in dramas, documentaries, and lifestyle programming. Write to him at lifestyle@thestar.com.my and check out his stuff at jasongodfrey.co. The views expressed here are entirely the writer's own.

I'm gonna be, all by myself 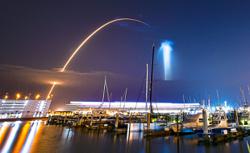 Dear Thelma: Socially rejected due to my looks, I find it hard to connect with people
Happy is an Asian elephant – but is she also a person?
City residents are often lonely despite the crowd
German farm owner saves fuel money with horse-drawn carriage
5 ethnic groups from Sarawak and their uniqueness
How Sarawakian Dayaks celebrate Gawai, their annual harvest festival Premium
Malaysia is drowning in uneaten food – 6 steps you can take to help stop food waste
Ukrainian nuns take in dozens displaced by war
Tiger biologist calls for strict enforcement to save the Malayan tiger
In Harmony With Nature And Chocolate