'Close to Ukrainians': Poland's many attitudes to refugees

Poland hasn't exactly been known as a country to welcome refugees with open arms. Under its national-conservative Law and Justice (PiS) party government, the EU member state has often opposed taking in migrants, for example when they were trapped in freezing temperatures at the Belarusian-Polish border.

But then Russia invaded Ukraine, sparking the "fastest growing refugee crisis in Europe since World War II", according to the United Nations.

Faced with an incessant stream of arrivals from the neighbouring country, suddenly all of Poland is mobilising to help. At least, this is the impression you get in the town of Przemysl near the Ukrainian border and the major Medyka-Schehyni border crossing.

Cars and buses are waiting in front of a train station filled with donations for the refugees who arrive here in trains from Ukraine.

Renata Czarnecka and her daughter Violetta have come in their fancy white sports car. They unload nappies, baby wipes and mineral water from the boot. Ukrainian refugees at the Medyka-Schehyni border crossing on March 5.

"We could all be in the same situation. No one is safe anymore," says the 60-year-old judiciary employee.

Following the Russian invasion of Ukraine, the UN refugee agency UNHCR soon reported of hundreds of thousands of refugees.

"We assume that the situation will develop dramatically and that the number of refugees will continue to increase," said Poland's Interior Minister Mariusz Kaminski four days after the beginning of the conflict on Feb 24.

A majority of the people fleeing Ukraine go to Poland. There are two border crossings near Przemysl. Trains arriving in the eastern Polish town bring more and more desperate people from Kyiv, Lviv and Odessa.

Red arrows and signs in Polish and Ukrainian guide the new arrivals to the reception centre that has been set up in the station, where men and women from Poland's fire brigade take care of them.

"People who arrive from Ukraine and have no way to travel on to other parts of Poland can get on lists here. Volunteers come here, offer transportation and accommodation. We then bring them together," says fire chief Lukasz Zielinski. Refugees looking through clothing provided for them at the bus transit centre in the car park of Przemysl's Tesco shopping centre.

The reception centre also arranges beds in the emergency shelters that Przemysl has set up in school gymnasiums.

Even before the Russian invasion of the neighbouring country, the PiS government had prepared Poland for the arrival of large numbers of refugees for weeks.

The Interior Ministry instructed the regional administrations to prepare suitable buildings as emergency shelters. Even the ultra-conservative education minister, Przemyslaw Czarnek, stressed that Ukrainian children were welcome in Polish schools.

This stands in stark contrast to the way in which Poland's government reacted just months earlier, when hundreds of migrants from war-torn countries like Afghanistan, Syria and Iraq tried to cross the EU's external border illegally from Belarus.

The PiS government sent some 10,000 troops to the border and established a restricted zone there. Soldiers erected a temporary fence about 2.5m high on these sections using barbed wire, with plans to replace it with a permanent 5.5m-high barrier, equipped with motion detectors and cameras.

The message is clear: Migrants have to stay out.

But does this mean all migrants?

"Poles feel a close connection to Ukrainians. Besides, the war is not far away, but right on our border," says Kalina Czwarnog, spokesperson for the aid organisation Ocalenie (Rescue), who has been working with the migrants on the Belarusian border. 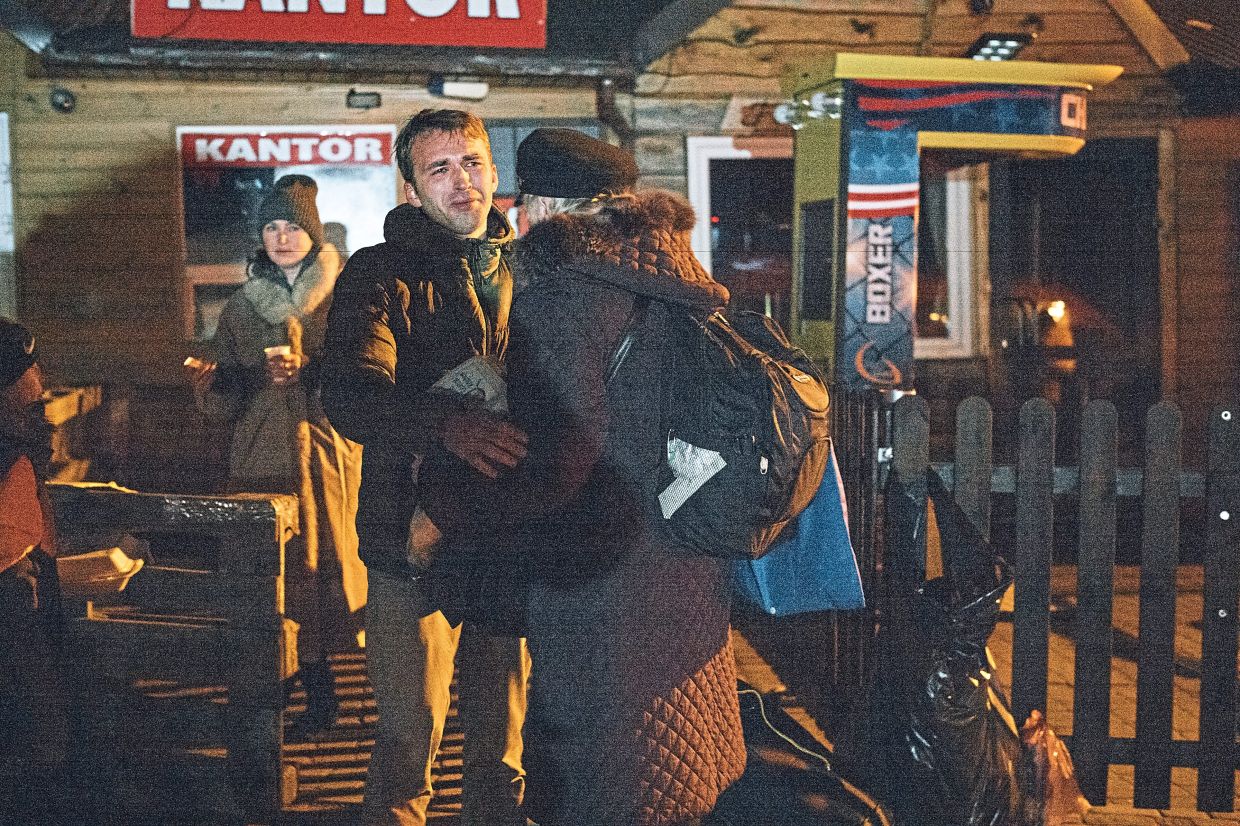 Ukrainian refugees at the Medyka-Schehyni border crossing in Poland on March 5.

"But unfortunately, the different approach also has to do with racist prejudices," Czwarnog says. This is highlighted by the government's different treatment of migrants from Afghanistan, Syria and Iraq in the past, and of Ukrainians today, she says.

But it's not only the government that is reacting differently this time. The Polish population is also mobilising to help.

At the Medyka-Schehyni border crossing, donations are piling up. Women who have just arrived take warm blankets, put their over-tired toddlers into dropped-off strollers and buggies.

"We walked the last 15km to the border," says Anja Piech, a 31-year-old chef. It was a strain for her little son Svyatoslav – just like the hour-long wait in front of the Ukrainian passport control.

Now the five-year-old and his siblings Volodya, 13, Katya, 12, and Adriana, 10, are contentedly spooning up hot noodle soup that volunteers have handed out to them.The refugees from Ukraine feel well-received in Poland.

Doha Chouika, a 19-year-old from Morocco who studied in Odessa before the Russian invasion, says that Polish police and border guards were kind and welcoming when she arrived from Ukraine, offering her and others with food and something warm to drink.

"They didn't care about nationalities at all, they saw us all as humans instead of passports," she says.

Doha has since travelled on to Germany, but many Ukrainian refugees are planning to stay in the neighbouring country for the time being.

"We are looking for a flat here. When the air raids stop, we will return to Lviv," says Maria Pototschniak, 38, who used to work in a pharmacy, while sitting on a cot in Przemysl station and feeding her little daughter Alinka.

Oksana, 45, and her partner Oleg have similar plans. Both have found beds in an emergency shelter set up in the gym of a primary school in Przemysl.

"This morning, some Poles already came and offered us a flat. I think for free," says Oksana. However, she didn't take the offer because she and Oleg are still waiting for her mother and their daughter to arrive."We want to stay in Poland, look for work, we are hardworking people," she says.

Most of all, Oksana is hoping for an end to the war.

"If the Ukrainian army manages to defend Lviv for three days, the Russians will retreat," she believes. – dpa

'I lost everyone': Ukrainian whose entire family died while attempting to flee conflict speaks out

Giant sharks once roamed the seas, eating whale-sized meals in five bites
Dog, missing for two months, found alive inside cave
If it's very hot, try watering your plants gently, a sip at a time
What is the 'bar' part of Gordon Ramsay Bar And Grill KL like?
Make your vote green, keep environmental issues on the radar screens of politicians
Fossil of new armour-plated dinosaur species discovered in Argentina
My Pet Story: Little wonders, these tiny little snails
Do spiders sleep? Scientists study baby jumping spiders to find out
GE15: Will Malaysia's next general election have a green agenda?
'Stranger Things' cafe in Tokyo lets you eat Demogorgon pasta, Eleven's waffles