Unusually heavy rainfall in December 2021 led to the worst floods (left) in recent years in Malaysia; but in January 2020, Sungai Muda in Kedah/Penang dried up and drought hit the north of the peninsula. With the planet getting warmer, we can expect more such weather extremes from now on. — RAJA FAISAL HISHAN/Filepic/The Star

My primary stop-and-think moment at COP26, which I participated in virtually, was listening to Rosamund Kissi-Debrah, whose nine-year-old daughter, Ella, died in 2013 in London because of air pollution-related asthma. Kissi-Debrah, formerly a teacher, is now a frontline advocate to end fossil fuel subsidies – because both climate change and the air pollution that took her daughter’s life are driven by burning fossil fuel. (COP26 was the 26th United Nations Conference of Parties on Climate Change, held from Oct 31 to Nov 12 in Glasgow, Scotland.)

Air pollution poses one of the biggest threats to human health, according to the World Health Organisation (WHO). In Delhi, India, one of the most polluted cities in the world, air pollution killed more Indians in 2019 than any other risk factor. A WHO report published in September found that exposure to polluted air causes seven million premature deaths each year.

In 2019, more than 90% of the world’s population lived in areas where concentrations of pollutants exceeded WHO guidelines.

So what impact did the gathering last month of literally thousands of people in Glasgow have on this and other climate crisis issues? Well, judging by the speed with which news media has moved on from the COP, the answer would be “very little”. And yet this isn’t the case, at least as I see it.

While more could have been achieved, several things happened at COP26 which were important signals that humanity is starting to face up to the reality of our situation. Maybe the best way to try and summarise it briefly is to look at the good, the bad and the ugly.

The journey continues. Before the 2015 Paris Agreement, the temperature increase trajectory was 4ºC. After COP26 we’re down to 2.5ºC according to the UN’s estimate. We also have a pathway – albeit still not very clearly mapped out – to get emissions down to a level where the temperature rise will be within the 1.5ºC limit necessary.

We saw collective commitments to curb methane emissions, to halt and reverse deforestation, align the finance sector with net zero carbon emissions by 2050, ditch the internal combustion engine, accelerate the phase-out of coal, and end international financing for fossil fuels, to name just a few. Glasgow was a platform for launching innovative partnerships and new funding to support these, with the aim of reshaping every sector of the economy at the scale necessary to deliver a net zero future.

Health was front and centre at COP26 for the first time, and more than 50 countries made commitments to move towards climate- resilient and low-carbon healthcare systems.

Regrettably, Malaysia was not one of them; all the more lamentable given that we were the first country to roll out a green vaccination programme. It’s time that health practitioners, among the most trusted professionals here, start to speak up about the relationship between people and the planet, focusing on root causes of disease and the consequences of unequal access to healthcare, as shown so painfully by vaccine hoarding and consequent Covid-19 mutations in countries with limited access to vaccines.

For the bad it’s pretty much the other side of the coin.

COP26 was supposed to deliver commitments to the 1.5ºC target but in the end, it kicked the can down the road.

Developed countries haven’t yet met commitments with long-promised resources to help the developing world wean itself off fossil fuels quickly and ramp up climate adaptation efforts.

And for the ugly – it’s really the consequences of what wasn’t achieved. There is now massive pressure on COP27, to be held in Egypt next year, to deliver the commitments that COP26 was unable to muster. The Glasgow decision calls on countries to “revisit and strengthen” their 2030 targets by the end of 2022 to align them with the Paris Agreement’s temperature goals. There really isn’t a lot more time to tie these commitments in.

But perhaps the ugliest aspect of COP26 was its disconnection from us: Those shaping the conference outcomes all speak the same climate change language – we don’t. Malaysians need to think in terms of a climate crisis rather than climate change.

“Climate change” seems benign, and is being addressed by scientists, politicians and officials negotiating in conference rooms in far off lands. They agree on targets but are wildly constrained in what they can deliver. And much of this is to do with each of us not being able or willing to recognise the link between how we consume and the slow poisoning of the place we live in.

Maintaining our standard of living relies at least in part on a change in how we behave. This change needs to be something that we do as individuals, families, members of our local community and our workplaces.

Labelling bits of our society tends to lead us to think of them as somehow separate from us. While the government needs to assume responsibility for stronger legislation that protects the environment and people, not laws that are solely focused on profits, the private sector also must invest in environmental social governance initiatives more robustly and work towards greater sustainability from production to consumption.

The membership of “the private sector” is pretty much everyone who works for a salary which isn’t met by taxpayers’ money – that’s most of us. And while there are clear signs that we are waking up to the connection between our actions and the changing climate, we need to accelerate the realisation that our actions have consequences.

Think about “planned obsolescence” – items being designed to break after a year or two, be tossed out, and replaced with a newer, shinier version. To an extent, planned obsolescence is an inevitable consequence of businesses giving us the goods we desire. It is a reflection of a ravenous consumer culture which industries may well have created for their benefit but in which we – you and I – are entirely complicit.

In addition to virtual malls, social media outlets, tech companies and many others that produce and sell the shiny trinkets we seem unable to resist, we need to remember that small and medium enterprises are the backbone of Malaysia’s economy. How can we support them in moving towards sustainability?

We’re seeing more and more small local businesses taking the step to be sustainable, in their production and packaging, for example. All these sporadic efforts need to be given a proper framework for support and for us to adjust our purchasing preferences.

What we can do 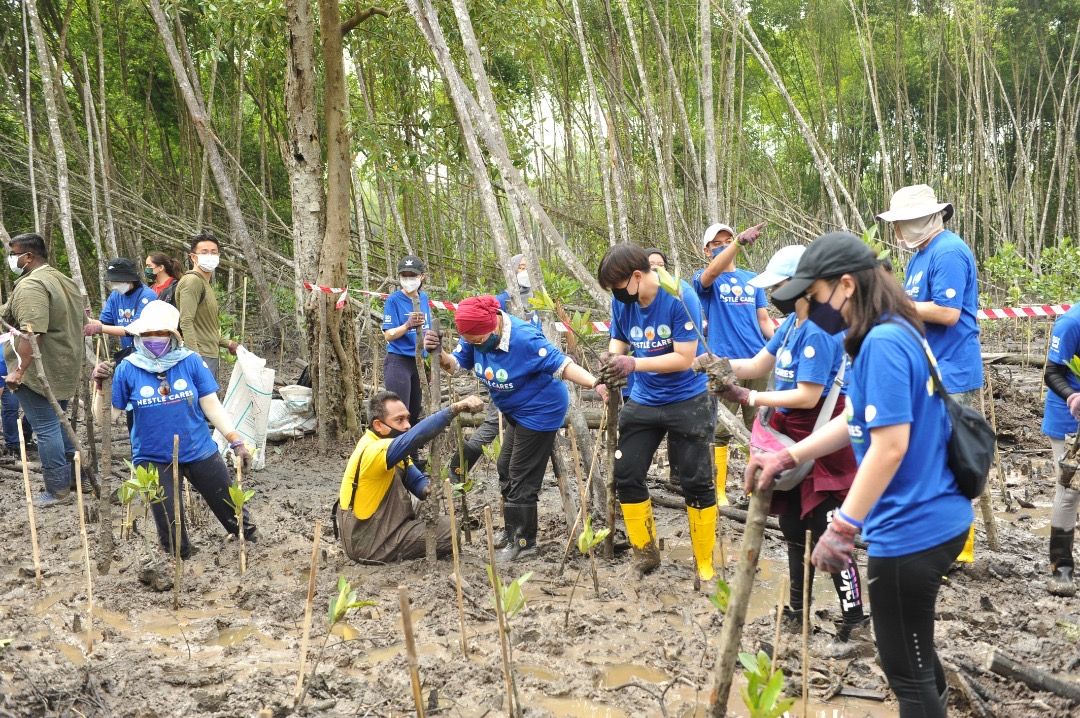 The columnist (in red head scarf) working with volunteers on mangrove rehabilitation. We need to realise we each have a connection with the planet we live on and that our actions effect it directly. — Sunway Centre for Planetary HealthUnderwriting perceptions of relevance of climate change to our everyday lives is the one key constituency we all always seem to forget about – because it’s everywhere. I warmly appreciate that The Star has provided me with this space each month and the fact that journalism speaks truth to power. But we need our media to do more.

Maria Ressa, the Filipino Nobel Peace Prize winner this year, gave an incredible speech at the acceptance ceremony earlier this month. She made the point that “the destruction has already happened; now it’s time to build”. The media has a central and, I fear in Malaysia, as yet unfulfilled role in this.

Without effective journalism we are at the mercy of the algorithms of the profit-focused American social media giants and can see all too clearly from the state of politics around the planet the consequences of social media becoming a replacement for mainstream media. I want to start a national conversation about the role that the media, across all languages, should play in generating greater awareness of what is happening to our lived environment.

So, for Malaysia, what is next and how do we prepare for COP27?

My sense is that, from a planetary health perspective, we are more strongly positioned to lead than we think. The November 2021 Worldwide Fund for Nature/Boston Consulting Group report Securing Our Future: Net Zero Pathways for Malaysia tells us that Malaysia’s large carbon sinks – ie, our forests – contribute to the removal of around three quarters of our total emissions, a unique advantage for the country. We need to move rapidly to solar, bioenergy and hydropower, including production of green hydrogen, as we wean ourselves off fossil fuels.

The report also notes that from a socioeconomic perspective the Net Zero 2050 pathway is shown to have strong benefits in terms of net GDP and job creation compared with less ambitious climate transition pathways. The investment costs required to achieve a Net Zero 2050 pathway are less than 1% of Malaysia’s GDP.

With this evidence in mind, we need to approach COP27 confidently, with greater coordination, with a level of ambition that fully captures the good news about our zero emissions opportunities and prospects, and an agenda firmly focused on planetary health.

I wrote last month about the 12th Malaysia Plan and the need to develop a planetary health strategy to support its implementation ("A national planetary health strategy could help the 12th Malaysia Plan make lasting systemic change", Planetary Health Matters, Nov 16). This strategy can help the country to think innovatively about our place in this set of multilateral negotiations, to challenge leaders to think differently, and to make the net zero proposition a successful reality.

But our leaders will only really get moving on this if we, the people, encourage them to do so and demonstrate our willingness to play our part in this difficult but essential and potentially uplifting journey.

Dr Jemilah Mahmood, a physician and experienced crisis leader, was appointed the executive director of the Sunway Centre for Planetary Health at Sunway University in August 2021. She is the founder of aid organisation Mercy Malaysia and has served in leadership roles internationally with the United Nations and Red Cross for the last decade.

The climate crisis: No more talk, it's time for action

Humanity needs to come together for the planet's health