Cloned camel calves in a pen at the Reproductive Biotechnology Center in Dubai. Cloning is in high demand in the competitive world of camel beauty pageants, leaving scientists at a Dubai clinic working round the clock to produce carbon-copy beasts. Photos: AFP

Cloning is in high demand in the competitive world of camel beauty pageants, leaving scientists at a Dubai clinic working round the clock to produce carbon-copy beasts.

Not every animal is blessed with sought-after drooping lips and a tall, elegant neck, but technology now allows wealthy clients to replace their most beautiful camel with one just like it.

At the Reproductive Biotechnology Center, with views of the UAE city’s towering skyscrapers, scientists pore over microscopes while dozens of cloned camels roam outside.

“We have so much demand for cloning camels that we are not able to keep up,” said the centre’s scientific director Nisar Wani.

Beauty pageants are not the only driver of the camel cloning industry. Many customers want to reproduce racing camels, or animals that produce large amounts of milk.

The camels are paraded at dusty racetracks around the region and scrutinised by judges, with occasional discoveries of Botox and cosmetic fillers adding a spice of scandal to the high-stakes contests.

Saud Al-Otaibi, who runs a camel auction in Kuwait, said customers’ judgement of the animals’ looks is key to his business.

“The price of the camel is determined according to its beauty, health, and how well-known the breed is,” he said.

When it comes to young animals, “customers are keen on seeing the mother to determine its beauty before buying the camel”, he added.

Injaz, a female whose name means achievement in Arabic, was born on April 8, 2009, after more than five years of work by Nisar and others.

From the minute Injaz was born, there was no going back.

“We are now producing plenty, maybe more than 10 to 20 babies every year. This year we have 28 pregnancies (so far), last year we had 20,” Nisar said with pride. 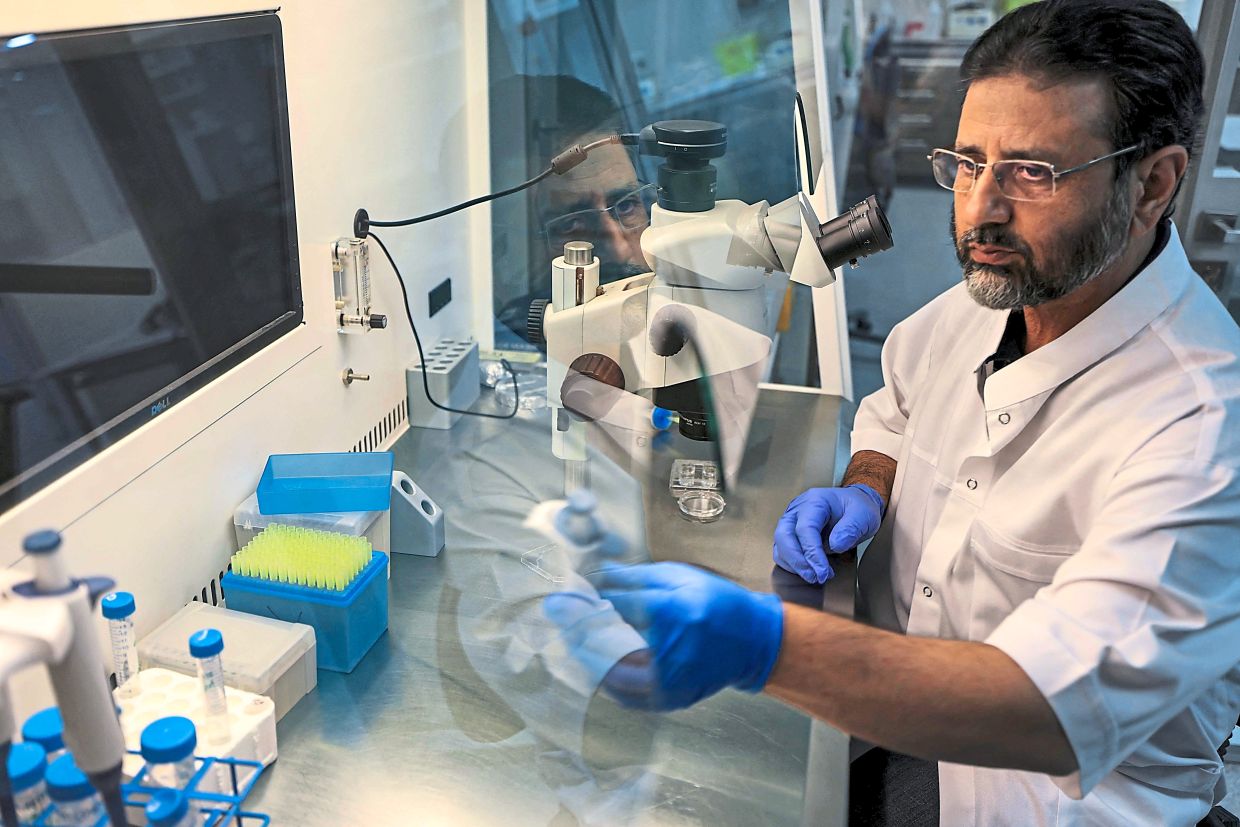 Dr Nisar, Scientific Director of the Reproductive Biotechnology Center, at the centre’s laboratory in Dubai.

The centre is churning out “racing champions, high milk-producing animals... and winners of beauty contests called Beauty Queens”, added Nisar, sitting in a lab next to the preserved body of a cloned camel in a glass container.

Known as “ships of the desert”, and once used for transport across the sands of the Arab peninsula, camels are symbols of traditional Gulf culture.

Now, after being replaced by gas-guzzling SUVs as the main mode of transport, they are used for racing, meat and milk.

“We have cloned some she-camels that produce more than 35l of milk a day,” said Nisar, compared to an average of 5l in normal camels.

Camel milk is commonly found next to regular milk at supermarkets in the Gulf, while meat products such as camel carpaccio are served in fancy restaurants.

Cloning dogs, cows and horses is popular in many countries, although animal rights groups say the process causes undue suffering to the animals that provide the egg cells and carry embryos.

With orders flying into the cloning clinics in the United Arab Emirates, the only such facilities in the Gulf, scientists have developed new techniques to keep up with the pace. 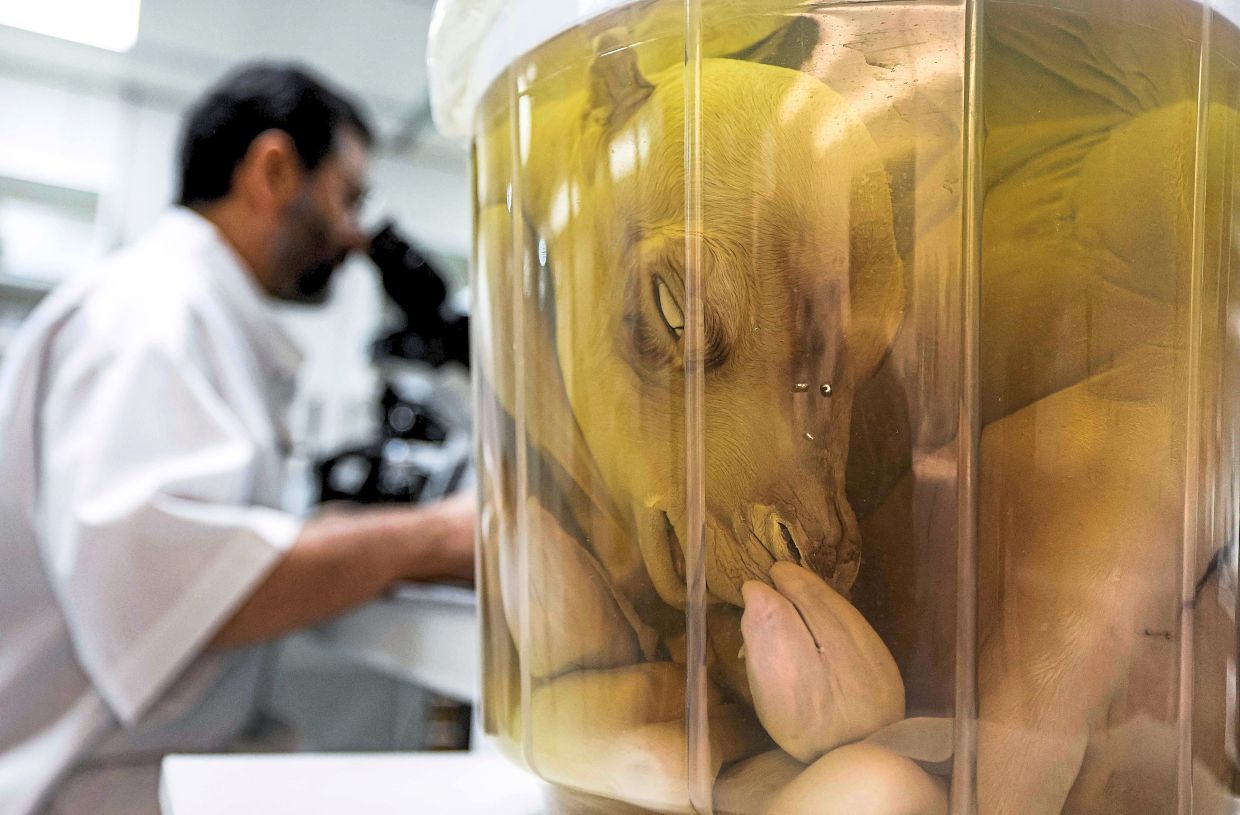 Dr Nisar looking through a microscope while nearby is a cloned camel calf preserved in formaldehyde, at the lab.

Female camels only give birth to one calf every two years, including a gestation period of 13 months.

But breeding centres use a surrogacy technique to increase the number of offspring, whether from cloning or traditional breeding.

“In this process, which we call multiple ovulation and embryo transfer, we super-stimulate the champion females and breed them with champion males,” explained Nisar.

“We collect the embryos from these females after seven to eight days and then we put them in surrogate mothers, which are very ordinary animals.”

Alternatively, cloned camels can be created by placing DNA from cells in the desired animal’s ovaries into eggs taken from the surrogate mothers.

“These mothers carry the babies to term, and instead of producing one baby at a time in a year, we can produce many calves from these animals.”

Cloning is not just for those who want to own elite camels. Sometimes, clients simply want to reproduce a beloved animal after a sudden death.

Nisar, who started working at the clinic in 2003, said his proudest moment was the birth of Injaz – and the worst time was her death.

“She died this year,” he said. “When we came in the morning, she had ruptured her uterus. We tried to save her as much as possible. This was the saddest moment.” – AFP Relaxnews 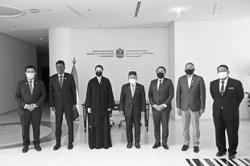 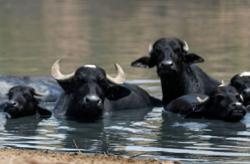