Homemade mooncakes by the writer on his first attempt. — Leonard Selva Gurunathan

It was a Saturday, my weekend offline, away from online lessons with my students.

It was time for a rare luxurious moment of self-indulgence. I grabbed a physical newspaper and a hot cup of coffee, and some toasted bread with salted butter.

While having breakfast, I started reading the news of the day. Then I noticed an extra item next to my butter-drenched toast: my home-baked mooncakes.

I enjoy eating mooncakes. But I had never thought of making them myself until last year.

During MCO 1.0, I dabbled in baking many Western-style baked goods like croissants and puff pastry, but I never thought of attempting a local dessert. Then one day I saw my favourite baker, youtuber Joshua Weissman, baking mooncakes. So I took the courage to try.So here I am in 2021, a year after baking my first mooncakes, and am at it again. The one-year-old mooncake press mould I bought last year is put to use again.

I learnt that there are mini life lessons in the process of making many Asian baked desserts. My mooncake baking journey started with soaking the red beans overnight, so it’s not a one-day affair. Life is all about patience and not rushing into things.

The next day, I did the dough. After mixing the golden syrup (store-bought) with oil and lye water, I mixed the flour and kneaded it into a dough. The dough was then left to rest for a few hours; I found that leaving it for four hours yielded a texture to my liking. The hard work took time to produce results. In a world that demands instant results, this waiting for the dough to rest is a useful reminder to me.

Then I boiled the red beans for about an hour till they became mushy. I also needed to make sure they did not get burnt. The mushy red beans were then blended into a paste. Lesson: Sometimes, the environment can be a challenge for us but putting ourselves through it can make us better and stronger. In the case of the red beans, on the day I soaked them, they were rock hard and couldn't be used for the mooncakes. You would even break your teeth if you were to bite them. But after going through soaking and boiling, it was very soft.

I cooked the paste with sugar and oil until it became a thick paste that could hold its shape. Then I let it cool.Next came my favourite part: placing the filling and wrapping the filling with a thin layer of the dough. This required the right ratio of the filling to the dough skin. I tried to make the skin as thin as possible (adjusting the ratio to match the filling) so that the mould pattern would form clearly on it.

The mooncakes were baked for five minutes and then taken out for egg wash. That was the most delicate moment and I carefully brushed the mooncakes with egg yolk wash. I had to take care not to overbrush the mooncakes, otherwise the egg yolk wash would flood the fine details of the patterns, causing the patterns to be lost and submerged under a layer of egg yolk wash. In a world where we think the more we have, the better we are, sometimes when we load ourselves with our vanity – ranging from what we watch to what we eat – we lose our true selves when they are covered by our superficial selves.

The mooncakes went back into the oven for another five minutes, then out again for a second brush. Another round of delicate brush work was required to make the mooncakes glossy.

Finally, the mooncakes went back in for one final bake of about 30 minutes.

On my first attempt, I was impatient and ate them soon after baking. But now, I only start eating them three days after baking. I can taste the difference. Also, those that are kept for three days have a nicer dark golden colour compared to freshly baked ones. The mantra of being patient and allowing time to get a better result is silently whispered to me by the mooncakes.

I did further reading on this delicacy and found that it has a rich history.

I also gave my home-baked mooncakes to my family and buddies nearby for their feedback.They enjoyed them, which made me happy.It will take many years to master baking the mooncake but I look forward to baking it every year. No doubt the mooncakes are calorie-rich, but they can never match the richness of love, gratitude and friendship in the heart when the mooncakes are shared with family and friends.

For next year’s mooncakes, I will be making my first golden syrup this year, which will be kept for a year for it to mature. 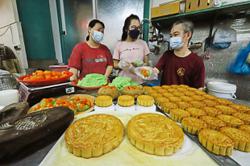 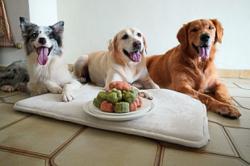