Why do millions of people in Africa not have electricity? A young person reading by the light of a lamp made by the Berlin-based solar energy company Little Sun. — Little Sun/dpa

Many parts of the world, when seen from space, still shine bright when the sun goes down. Which makes the large parts of the African continent especially stand out for remaining in the dark.

Many people in Africa still don't have access to an energy grid. According to the International Energy Agency (IEA), some 580 million of the 1.3 billion people living in Africa are without energy.

And while there are tons of proposals on how to solve this, there are a number of hurdles that have prevented them from being successful.

For one, many Africans live in remote, thinly populated areas where the expansion of the central energy grid is not economically viable.

"Supplying rural areas via central power stations with highly branched energy grids does not seem effective," says Daniel Busche, leader of the energy access programme of the German development authority GIZ. "Decentralised approaches would be better for that."

Those are systems that don't need to be connected to a central grid and generally use renewable sources. While energy from a gas or coal power station can only be accessed through a central line, energy generated by the sun is accessible to everyone, everywhere.

But Africa still has a way to go: "The continent with the richest solar resources in the world has installed only 5 gigawatts (GW) of solar (photovoltaics), less than 1% of the global total," according to an IEA report.

One of the more promising solutions is flexible mini grids, which produce energy via solar panels and can span from a few houses to entire villages. But the investment costs are high, and the profitability often low, Busche says. There are few firms willing to operate such grids for time periods spanning 15 to 20 years.

Another big problem is the selection of appropriate villages for mini grids, says Nabin Gaihre of the German firm TFE Energy. Developers lack the knowledge about where the villages are located, how much energy they need, and whether inhabitants can pay for it.

TFE Energy created a tool that provides this crucial information based on satellite imagery. The firm, for instance, collaborates with the World Bank, the Nigerian government and other energy firms.

Home systems are quicker and easier than mini grids in providing solar energy. They are small modules that can be installed on rooftops. Depending on their size, the systems can charge a phone, power a television set or provide energy for the whole house.

Energy company Mobisol offers such home systems in Tanzania, Kenya and Rwanda. With these small panels, which produce 50 to 200 watts of energy, people can, for instance, operate a shop - such as a phone charging station, hair salon or supermarket, Mobisol says.

However, these systems have their limits: They are "important, but their capacity with rising energy demand is limited," says Busche.

Even for the poorest and most remote areas there are ideas.

These small lamps fill two central needs of many people in Africa: light and charging their phones. This was especially visible during the coronavirus pandemic, as health sector employees purchased solar chargers, says Felix Hallwachs, chief of the Little Sun foundation. Solar power has also spread across Africa in recent years because components like solar panels have become cheaper, Busche says. Payments via mobile phone allow customers to buy such equipment or energy directly – even in very small amounts - in instalments.

Decentralised approaches to energy supply are a chance to "skip building large, national energy grids in order to provide all people more efficient and possibly more democratic access to energy," says Hallwachs. He believes more innovations will come over the next few years regarding technology and business models.

Busche agrees: "I am convinced that without decentralised approaches, we will not be able to manage the electrification of Africa." – dpa/Gioia Forster A man in Senegal charges his phone with a device made by the Berlin company Little Sun. 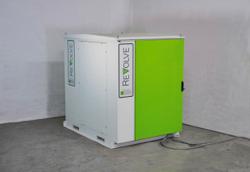 Hamsters and other rodents need space and playful stimuli to thrive
Turning diapers into compost gold
Houses of the future could be built in 24 hours and look like honeycomb cells
How to help your cat if it is suffering from weak kidneys
Potato Head Drops 'Mr' title to promote inclusivity
5 creative ways to upcycle face masks
Library partially built with mud is award-winning architect's next project
Three myths about couples therapy
Some dogs are able to memorise words with impressive speed
Pollution from electric cars is an 'ignored' problem, OECD says