By AGENCY
Photos By Oakland Zoo/dpa

The mountain lion baby sisters Pink Nose and Black Nose sitting in a box. They were rescued after a forest fire had raged in California.

Captain Cal, a mountain lion cub who survived the fires blazing in California, is still healing. His paws are thickly bandaged, his whiskers are nearly burned off, and his fur is scorched.

Still, his very survival suggests a guardian angel was watching over him as the Zogg fire raged through northern California.

A firefighter discovered Captain Cal, who was just four to six weeks old at the time. The cub is now being nursed back to health by the team at Oakland Zoo.

"When he first came in I really didn't think he would live," vet Alex Herman says, recounting the severe burns to all four paws, injuries all over the little puma's body, dehydration and the fact that the cub was on the verge of starvation.

The team named him after the mascot of the California fire brigade.

Cal can now be seen toddling around his exercise area and sniffing through a grating at two baby sister cougars, Pink Nose and Black Nose.

Both five weeks old when they arrived at the zoo, they lost their mother in the forest fire but managed to escape unharmed.

They can be seen hissing loudly in videos from the zoo, gazing into the camera and checking out their new surroundings.

After forest fires in Australia earlier this year, images of orphaned kangaroo babies and koalas with burned paws circulated worldwide.

Now, netizens are meeting Captain Cal and others orphaned by the fires that burned through the state since mid-August, destroying more than 16,000sq km of forest and farmland.

"It's a massive crisis and we are only halfway through the fire season," says Herman.

Aside from mountain lions, the fires have also affected countless deer, foxes, bears and other animals.

According to the Mountain Lion Foundation (MLF), a non-profit, there are about 30,000 of the animals – also known as pumas or cougars – in the United States, mostly in California, with a few hundred in Florida.

Those two states are the only ones with hunting bans – though that doesn't mean the animals are sufficiently protected, says MLF director Debra Chase.

Alongside forest fires, further dangers include poaching, traffic accidents, poisoned prey and the destruction of the animals' habitat.

"Pumas are extremely important as ecosystem engineers and for biodiversity," says Chase. They play a key role in regulating the wildlife population, alongside other predators like wolves and coyotes. It hasn't been all good press for mountain lions in recent months.

A hiker recently shared a video of an encounter with a puma mother and her cubs in a forest in Utah. The puma kept following the man, advancing and hissing for six minutes as he ran backwards, shouting.

"She was not stalking or hunting him as prey," says Chase. She just wanted to scare him off to protect her young. Chase says attacks on humans are "extremely rare" and that mountain lions are usually shy.

One killed a cyclist in 2018, in Washington, the state's first deadly attack by a puma in almost a century, according to media reports.

Gamekeepers later tracked down the animal and killed it.

Last year, a jogger was attacked in Colorado, but he fought back despite serious injuries and strangled the young puma.

For Captain Cal and the two small females, there is no way back into the wild. Usually, their mother would care for them for two years and raise them as hunters. 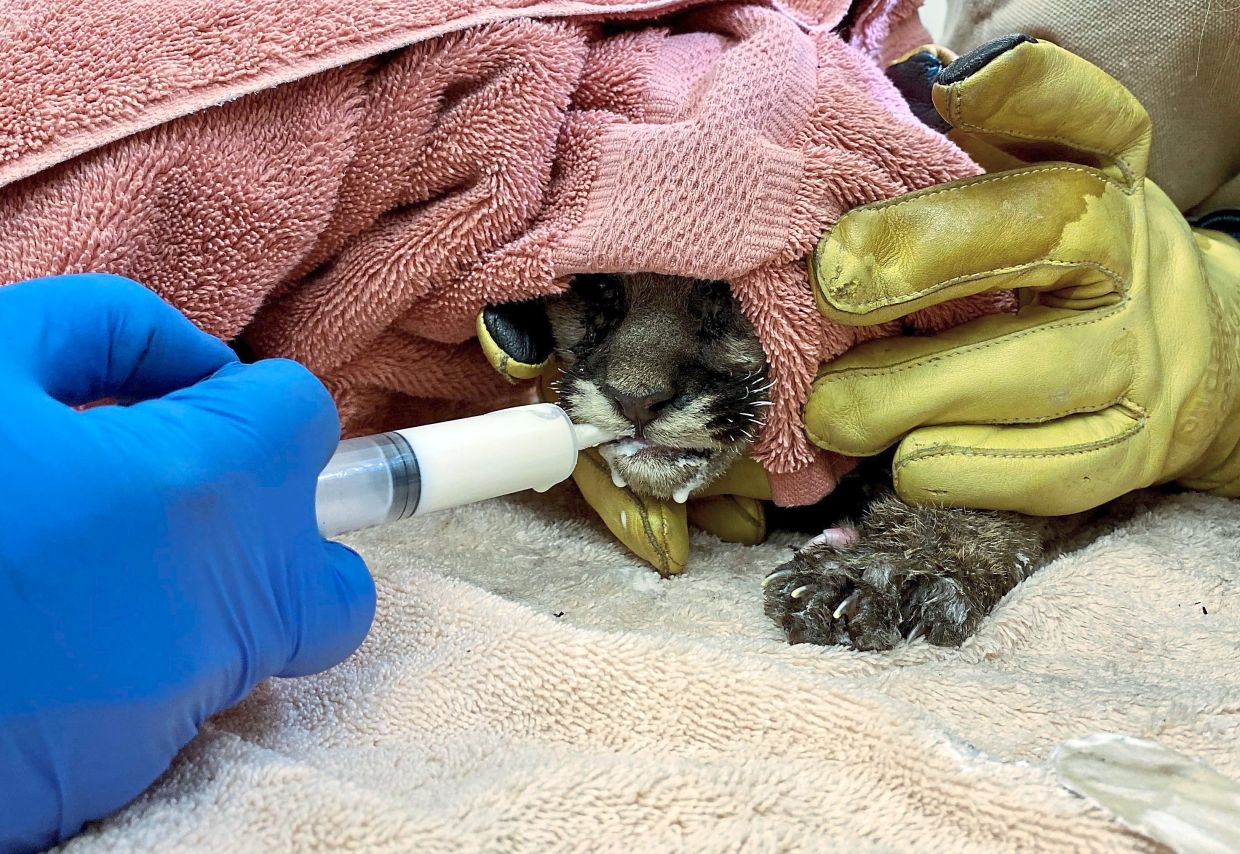 Captain Cal, a baby mountain lion who survived a forest fire in California, is fed milk with a syringe. He will never be released into the wild and will end up at a zoo or big cat park.

"Our long-term vision is to develop a system where we can rewild some rescue cubs. Some orphaned bears can be trained to go back in the wild, but we are not there yet with mountain lions," says Herman.

"If we release him, he wouldn't have the skills to survive."

At some point when the cubs are older, the team will find a suitable zoo or big cat park for the mountain lions that were rescued, he says.

Oakland Zoo in California has take on 13 orphaned cubs over the past two years - mostly after their mothers were killed in traffic.

Captain Cal's story attracted attention because of the fires raging in California.

"He is the face of the crisis our planet is in, with climate change-induced droughts and wildfires," Herman says.

"I hope he will not only help mountain lions, but also help us to mitigate and reverse climate change," he says. "

Scientists say it's known that the climate crisis makes weather extremes such as drought and heat worse." – dpa/Barbara Munker