Paleontologists working at an excavation site in Otay Mesa, California, on July 9. A trove of fossils that could be as old as 28 million years have been unearthed where a freeway is being built that will connect to a new border crossing. — TNS

Paleontologists will tell you that field work is a lot like fishing. Nothing happens for long periods of time. But you can’t catch anything if you don’t have your line in the water.

In San Diego, the United States, they’ve had their line in the water. Again.

At a freeway construction project in Otay Mesa, paleontologists have found fossils that may open a window into what this part of the world looked like about 15 million years ago.

It was a place where early camels roamed, and prehistoric hoofed mammals, and probably a carnivore or two. And where volcanoes erupted.

“The finds suggest that we have a whole new chapter of our history that we get to explore, ” said Thomas Demere, curator of paleontology at San Diego Natural History Museum and director of its PaleoServices team, which located the fossils while monitoring the freeway project.

The discovery in June joins a roster of significant unearthings during construction projects in San Diego County – mastodons, dire wolves, sea cows, giant sloths, armoured dinosaurs – that are painting a fuller picture of the region and how it’s changed over time.

Demere said the geologic record dating to 65 million years ago is fairly complete for that area, but there’s a gap in the period from 15 million to 28 million years ago. The new fossils, he said, will help fill it. He suspects they are on the younger end of that range.

He’s hoping some new species will emerge as researchers spend the coming months taking a closer look at what’s been pulled from the construction site.

The items may wind up on display at the museum, where officials are considering an update to “Fossil Mysteries”, a march-through-time exhibit that shows visitors what the region looked like when it got 152cm of rain every year. When a 10m shark swam in a bay. When saber-toothed cats roamed near Cuyamaca Peak.

“We never would have seen them if they weren’t building that road, and now we get the chance to preserve them in perpetuity, ” Demere said. “People living today, or hundreds of years from now, can come and look at this material and learn what they can from it. Or just marvel that these animals lived here.”

The construction site is part of a project connecting state Route 11 to a new Otay Mesa East Port of Entry on the US-Mexico border. It’s a joint venture between Caltrans and the San Diego Association of Governments.

Under environmental law, projects in areas where fossils might be are required to have paleontologists on site. San Diego County, because of its layers of sedimentary rock, is a rich area for the remains.

The monitoring work is long periods of boredom punctuated by moments of excitement – moments that come when they notice an unusual smear of colour in the dirt being scraped by a bulldozer. Or when they see a change in the texture of the soil.

“These people have been fishing for years, ” Demere said. “They know what they’re looking for.” A flag gets raised, the area is marked off, and the scientists dig deeper.

A certain amount of tension surrounds the whole process. A fossil find means highway work has to stop in that area, at least for a while, and time is money in the construction world. But Demere said some workers don’t see it as a bother. They’ll point out fossils when they see them, or welcome the opportunity to learn about what’s been found.

This time, what was spotted was in a bowl-shaped area, possibly an ancient pond. They uncovered plant fossils, including reeds, which suggest water was nearby.

How did animals wind up in a pond? Maybe they fell in and drowned. Maybe they died somewhere along a stream that fed the pond and were washed down.

Once found, the fossils got wrapped in plaster jackets, 0.9m in diameter, so they could be transported back to the museum. When researchers are able to get back in the lab, they will remove the surrounding sediment to get a better idea of what is there.

“We found a concentration of vertebrate fossils, limb bones and jaws from a variety of mammals, ” Demere said. “We found the upper teeth of an early horse, the first horse fossils found here that are older than 3 million years.”

They also unearthed remains of a camel – not a new discovery for this region, but always interesting. A lot of people are surprised to learn camels originated in North America before moving to Europe and Asia. They became extinct here about 11,000 years ago.

And they found “volcanic bombs”, semi-molten rocks thrown into the sky during eruptions and shaped by airflow while in flight.

None of that figures to stir as much controversy as an earlier dig of mastodon bones that Demere and colleague Richard Cerutti worked from a site discovered during the expansion of state Route 54 near National City in the early 1990s.

A quarter-century of research led a team of scientists to conclude that marks and fractures on the bones were consistent with human activity – a jaw-dropping hypothesis because it placed early man on this continent some 100,000 years earlier than previously believed.

Other researchers disputed the conclusion, but that’s part of what makes paleontology fascinating, Demere said. It’s why he still gets excited about new finds, even after 41 years at the museum.

“When you are sifting through layers and layers of our physical and biological history, you come to understand how dynamic the planet is and has been for 3 billion years, ” he said. “You get this very real sense that we are part of this bigger story of the history of life here.” – Tribune News Service/The San Diego Union-Tribune/John Wilkens 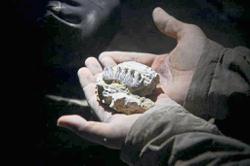