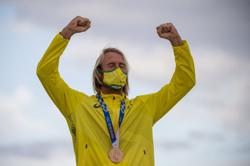 Several properties designed by the late American architect have closed their doors, as more than 710,000 people (as of April 18) have been tested positive for Covid-19 in the United States.

The initiative, presented in collaboration with the Frank Lloyd Wright Foundation and Unity Temple Restoration Foundation, will allow virtual visitors to discover some of Wright's most famous projects.

Today we are exploring the @emilbachhouse in Chicago! Many thanks to Carmen for showing us around portions of the enchanting first floor. During normal operations, the home is available for tours, event rental and overnight stay! Learn more at emilbachhouse.com. #wrightvirtualvisits

Among them are landmark properties that the American architect designed during his seven-decade career, including the Malcolm Willey House, Ebsworth Park, Emil Bach House, Seth Peterson Cottage, Martin House and Gordon House.

Architecture enthusiasts will also have the opportunity to virtually visit Fallingwater, Hollyhock House, Unity Temple, and Wright's homes and studios at Taliesin, Wisconsin and Taliesin West, Arizona – all of which were added to Unesco's World Heritage List in July 2019.

As we stay “Safer at Home” here in Los Angeles, Jeff Goodman @wrighttaliesin shares a look at the Garden Room, a space for living and entertaining at Wright's winter home in Scottsdale, Arizona. Like Hollyhock House, it has a phenomenal fireplace that takes inspiration from the site and natural landscape. #WrightVirtualVisits @wrighttaliesin @culture_la @barnsdallpark

"During this time when so many people feel disconnected from the world, we know that when people experience Frank Lloyd Wright designs, it brings them inspiration and happiness. We hope that taking a virtual visit to any of these Wright designs around the country will bring a little joy to their day and bring them into our community that remains connected around our shared passion for beauty, architecture, nature and design," Jeff Goodman, vice president of communication and partnerships at the Frank Lloyd Wright Foundation, said in a statement.

As we are all sheltering in our homes, our friends at @hollyhockhouse give us a #WrightVirtualVisits tour of Frank Lloyd Wright’s first Los Angeles commission. Please be sure to follow their page on Facebook for more pictures and videos, and follow along on Instagram and Twitter too: https://www.facebook.com/officialhollyhockhouse/ https://www.instagram.com/hollyhockhouse/

Launched earlier this April,"Wright Virtual Visits" will continue every Thursday for the coming six weeks.

The video tours are posted on the websites and social media accounts of the different sites participating in the initiative, with organisers expecting additional sites to join as the programme develops.

#Star50: Malaysian businessman empowers special needs teens via skills training
#Star50: Star Golden Hearts Award recipient overcomes adversity to keep helping others
Billionaires are throwing money into racing into space while Earth burns
Why is it so difficult for people to ask for help?
3 tips for keeping your plants alive while you’re away
Germany will soon have a million electric cars on the road
Unhappy at work? Switching jobs isn't always the best solution
Salmon, scampi, strawberries:�The best food to pair with a rose wine
How Poland's cycle network is picking up speed
Dear Thelma: Feeling neglected, hubby is hardly home and doesn't care