Cats are known to be able to sense when their humans are ill and would then provide comfort. — 123rf.com

It hit me like a tonne of bricks: mid-morning I had a tickly throat and, by lunchtime, I was down with a raging fever. Thankfully, it was the weekend, so I drank a huge glass of water and went straight to bed.

Target was with me the second my head hit the pillow. As I shivered and sweated, he leaned in, purring and kneading. I fell asleep soothed by the rumbly furry cuddles.

When I was up hours later, coughing my lungs up in the loo, ribs sore from hacking, Target sat next to me, purr going strong. Then Swooner trooped in, his fur messed up from having fallen out of bed in a hurry.

It was the armpit of the night, that awful time when you can just feel your soul thinning, but my cats were there for me. They were so concerned that I was really touched. It showed how empathetic, kind and caring cats are.

And that’s when the brain kicked in and reminded me that cats are also known to sense impending death. I remembered Oscar, the old folks home cat who, as reported in the New England Journal Of Medicine in 2007, would snuggle with patients who were about to die.

At the time of the paper, he had done it over 20 times and in a later review piece, he had added more cases to his score. The doctors and nurses speculated he was picking up on a pheromone or smell we can’t detect.

So, feeling like death warmed over myself, I was about to question Target when Tic Tac bounced in. From her damp paws, she’d just come in from the roof. She squeaked with excitement at seeing us all awake and then danced over to me.

It killed the morbid thoughts because Tic Tac is at the stage where a flushing toilet is awe-inspiring fun. Even fever and a chest that feels squeezed by a vice gets a lift from a kitten shouting, “Do it again!” in Cat. I flushed the loo for her, twice, and then went back to bed, furry cavalcade in tow.

That’s when it got really interesting. Target jumped onto our pillow, settling me with his purrs, paws in my hair. Swooner came and lay next to me, chirping softly and flipping his tail.

That’s typical Swoon, by the way. I’m convinced he’s part Spanish because just like my friends back home can’t speak if you ask them to sit on their hands, my boy can’t express himself without waving his tail. The chirping is his soothing chat, a feline, “There, there.”

As the big cats provided comfort, Tic Tac jumped in. Big bat ears, bright sparkling eyes and the little tail perked up with excitement, she squealed her kitten meow and pounced on top of me.

I was beyond it but Target just leaned over and swept her off. Not meanly, not even a hiss, but a very definite, “Stop that.” As Tic Tac is in awe of the senior cat, she lay very quietly and watched.

Target kept purring and Swooner headbutted me and then licked my nose. The furry rasp always makes me wriggle but this time he put a paw on me and quickly ran his tongue over my hairline. 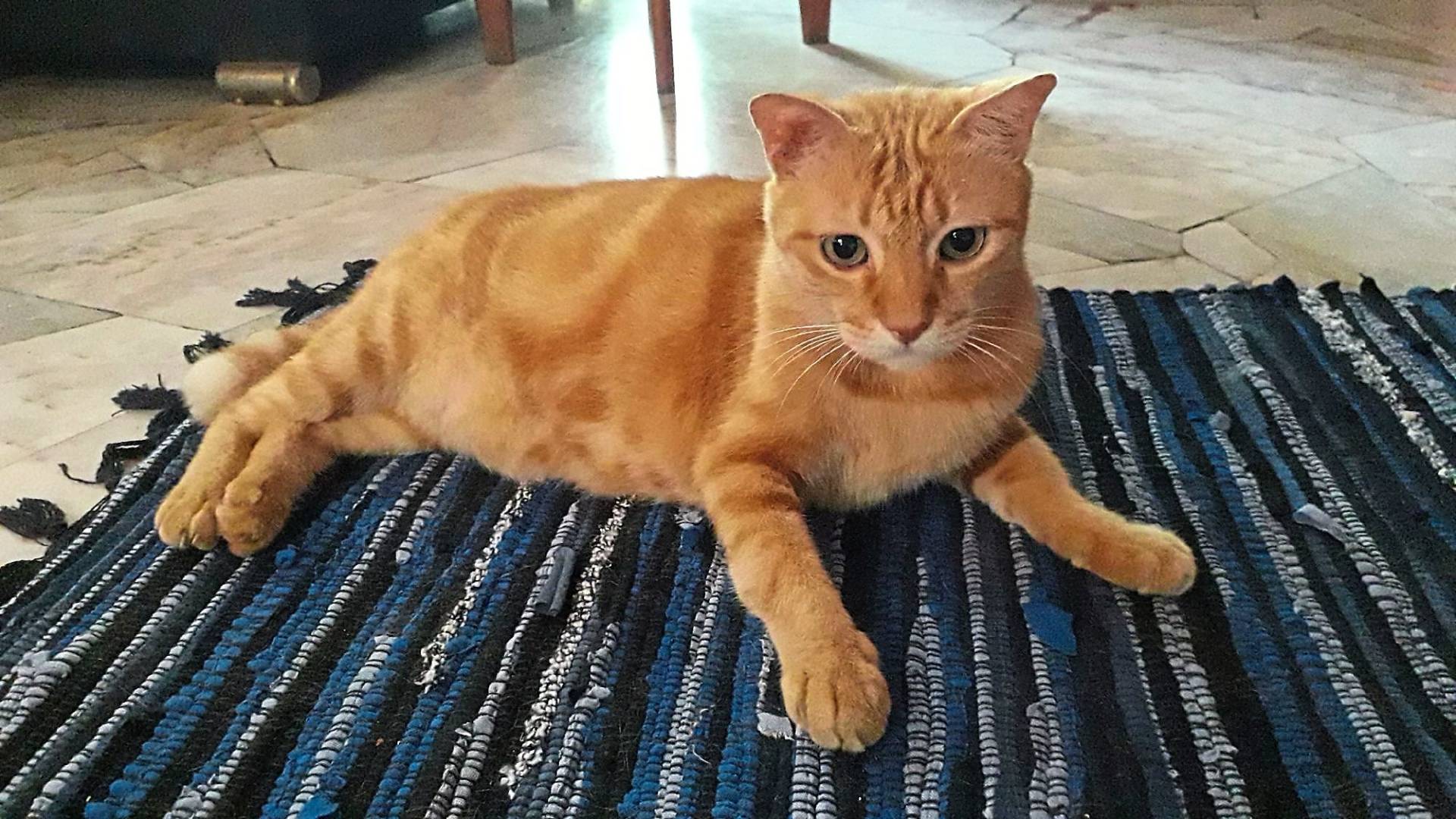 Target is relaxed after a heavy-duty stint as cat nurse. — Ellen Whyte

I had to laugh because I knew exactly what prompted my pet. For cats, maintaining impeccable looks is part of cat cool. As I was slick with fever, Swooner decided I needed help setting myself straight. He does the same for Tic Tac when she’s messy.

What was wild was that Tic Tac watched with big eyes and then climbed on top of me, purring too. No bouncing, biting and nipping as she usually does. She was imitating the big cats and taking care of me.

At the time I filed it away and went back to sleep but now I’m better, that little scene fascinates me. Although I am perhaps a bit out there in terms of considering cat behaviour, I think it’s very telling. Like us humans, cats take an individual approach to illness.

Swooner is sweet-natured and, over the days I was ill, he popped in and out. If he were human, he would be the kind who drops a cup of tea on the bedside table, gives you a quick hug and then vanishes, duty done. Lovely, but not a natural sickroom person.

Target stuck with me for three days, popping out for a pee and a bite to eat before coming straight back to bed. He’s super empathetic. If there were a Florence Nightingale Award for cats, Target would have one.

As for Tic Tac, I’m fascinated that she is learning to spot illness in humans and I’m curious to see what approach she’ll take. Will she be like Swooner, like Target – or perhaps completely different?

One thing I do know for certain. She stole a piece of chicken from the kitchen counter the day before yesterday, and today she tried to pinch the bread off my plate while I was watching her.

As our sweet Tic Tac has the soul of a raider, there is no doubt in my mind that when opportunity knocks, she’ll be on hand with a sweet meow – before quietly taking possession of the chicken soup.

In the old days, animals were thought to have psychic abilities or to be in the league of supernatural creatures. Cats were accused of stealing the breath of their humans, simply because they like to lie on top of us, soaking up our body heat and cuddling closely.

Today, scientists believe there are biochemical processes that animals pick up on but that are beyond our skills. While they don’t know how it works, the knowledge that animal noses are superior to ours is indisputable, so it is no surprise that we use our pet friends to help us out.

Dogs have been studied quite extensively. There are dogs who have been trained to sniff out certain cancers in urine samples, to sense when epileptic seizures are about to occur, and to act when a human is having a panic attack.

Our own Malaysian fashion stylist Peter Lum reports that his dog Dindi helps him monitor his diabetes (https://tinyurl.com/peterlum-dindi).

Cats are less studied because they have an unfair reputation for being aloof. However, new studies are unearthing some new data.

A small study in Michigan’s Oakland University in 2016 found that cats behave differently when their owners are happy and smiling or frowning and unhappy. A follow-up study published this September proved that cats are attached to their owners in exactly the same way human babies are attached to their mums. So, there’s scientific evidence that cats do love us and that they have empathy for us. However, from other similar studies, it seems though that cats may need to learn to read their humans.

If so, that would be the same the other way around: we can read our own cats but we may not read strange cats very well.

Maybe, if we learn to communicate better, we will have our kitties “telling” us what they sense about our health.