Palletballet, a 2018 Merit Award winner, is a colourful painting kit which children can use to freely express themselves through traditionally inspired wooden tools. Photos: Kokuyo

Imagine sending a postcard personalised with a voice message to a friend or family member while on holiday. Or trying out a pencil set that allows both the sighted and visually impaired to enjoy the writing experience.

These creations were all past winners of the Kokuyo Design Awards, an annual design competition open to designers, engineers and talents worldwide that was first held in 2002.

The Awards was initiated by listed company Kokuyo, a household name in Japan for stationery and office furniture. It started as a small company in 1905 producing general ledgers in Japan.

The competition seeks to attract functional and elegant lifestyle products with mass appeal for the consumer market. Many of these designs have since been commercialised and are available for purchase.

“The reason we started this design award was to create products with the customer in mind, and to showcase the thought process and the stories behind the creations. It’s great to know that it is now globally recognised, with at least 40% of the submissions garnered from overseas,” said Takeshi Fujiki, director of the Awards, who was in Kuala Lumpur recently. 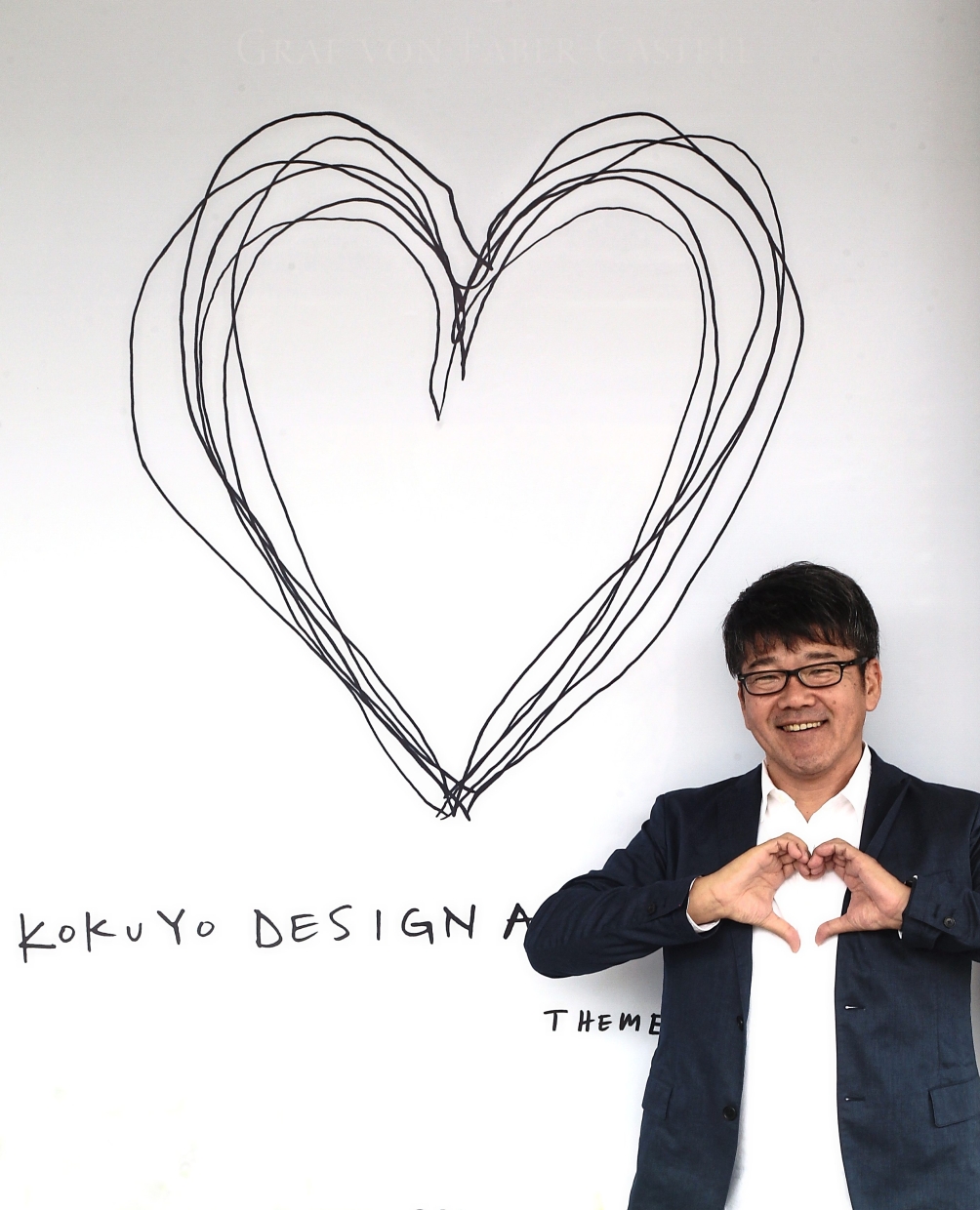 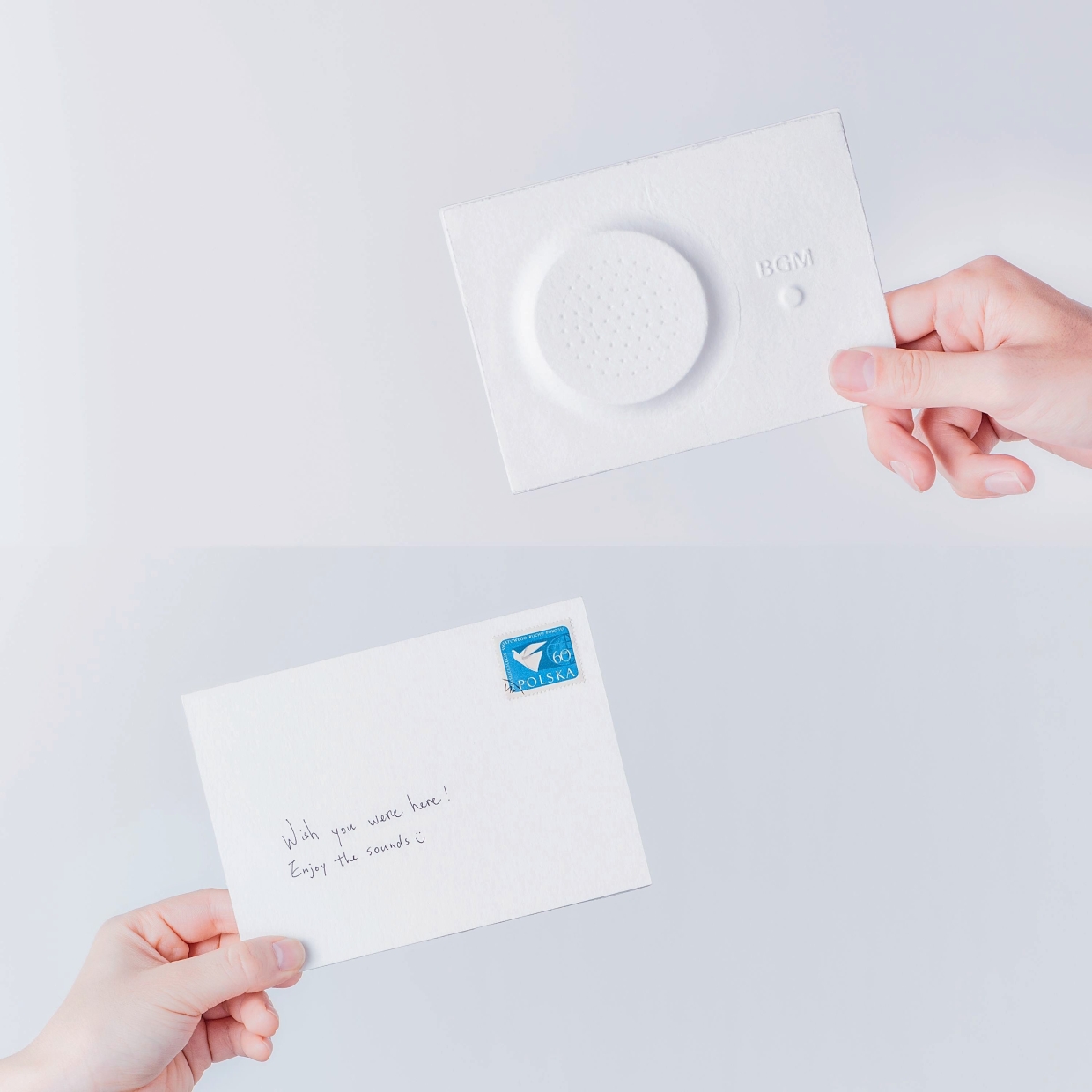 The BGM Postcard lets the sender record sounds via a microchip before mailing the card.

The BGM “sound” Postcard, designed by Chou Ming Hsi from Hong Kong, lets the sender record sounds via a microchip before mailing the postcard. It was one of the entries that impressed judges at the 2018 Kokuyo Design Award.

Meanwhile, the Sound of Drawing pencil set – which includes a sharpener and a ruler – was named the Grand Prix winner at the same Award, which carried the theme Beyond Boundaries.

Japanese designer Takuma Yamazaki wanted to create a product that would be universally inclusive of even the visually impaired and offers a fresh creative experience for sighted and non-sighted users.

The concept of the product lies with “amplifying the faint noise created by the friction between pencil and paper, making it enjoyable not only as a visual sensation but also as a musical instrument, going beyond the traditional interpretation of a regular stationery”.

At present, the set is used in workshops held in Japan. These workshops, said Fujiki, are attended more by sighted (90%) consumers than the visually impaired (10%). 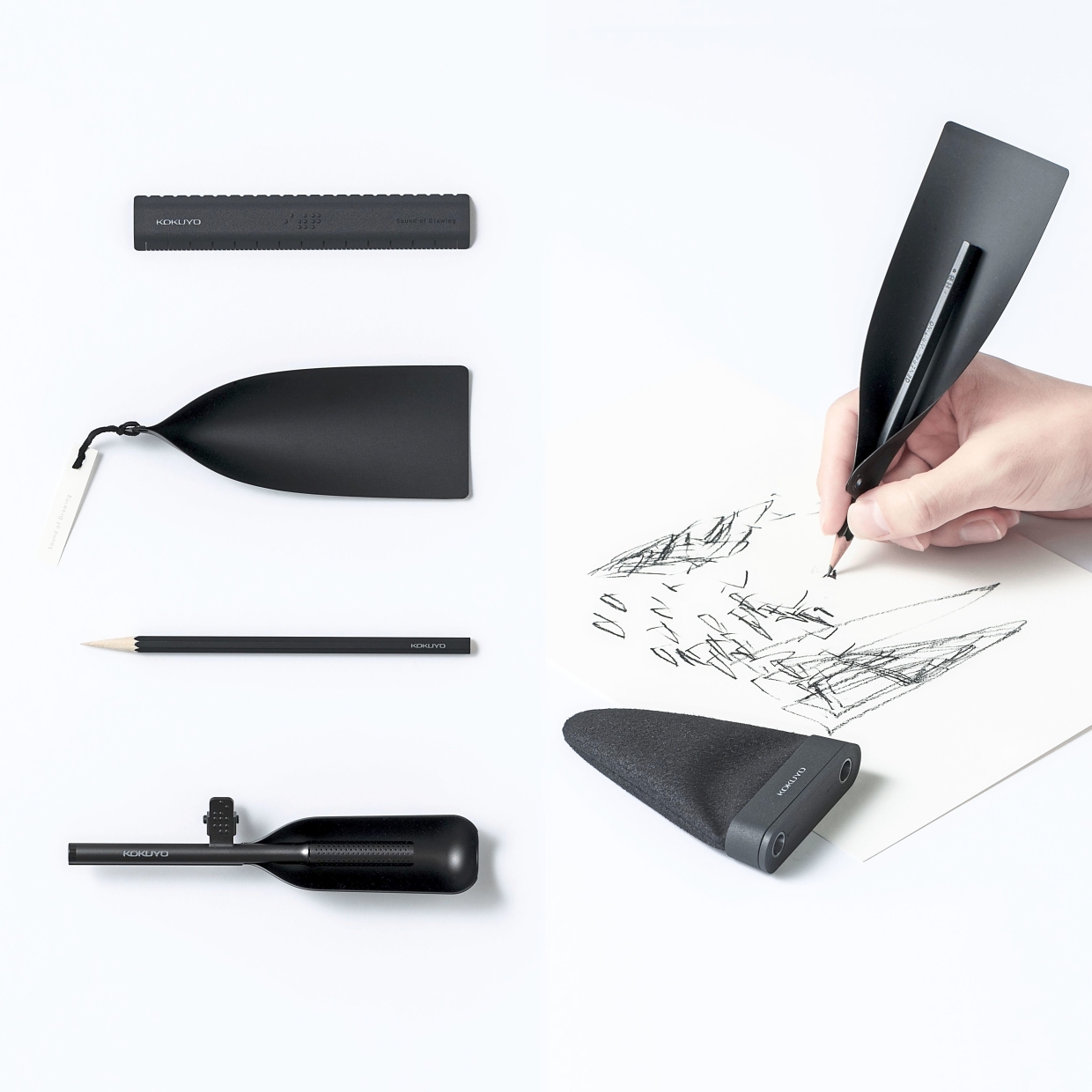 The Sound of Drawing pencil set was named the Grand Prix winner of the 2018 Kokuyo Design Award. 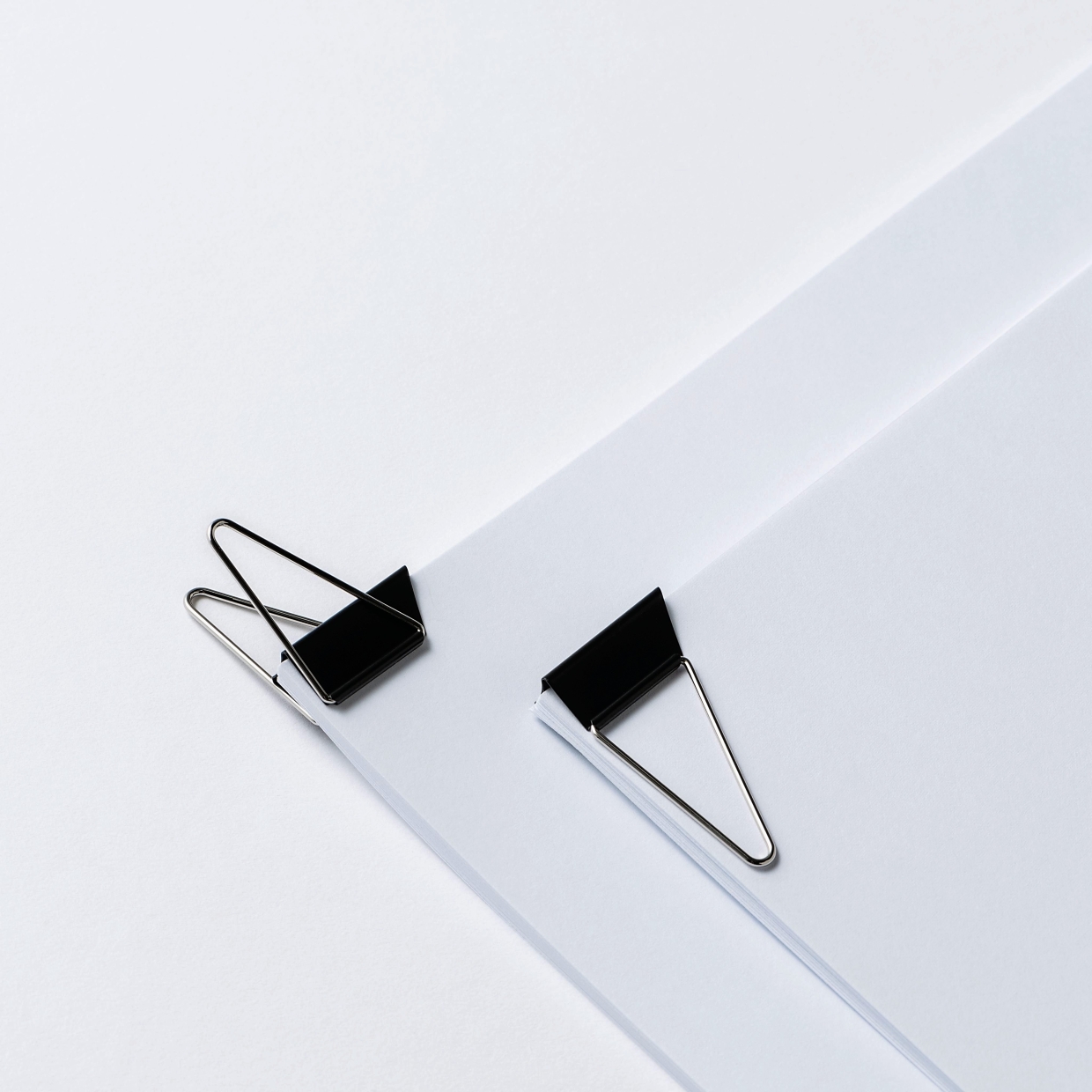 The Smart Double Clip won the 2018 Merit Award and is being mass produced for commercialisation.

“We hope to commercialise the Sound of Drawing by the time the Paralympics is held next year in Tokyo,” said Fujiki.

To date, a total of 20 designs have been produced and commercialised for sale since the award was first held.

Designs that can be submitted are not limited to stationery and furniture, but also open to clothing and even food.

“We want to go beyond stationery and explore new categories. Designers get to commercialise their creations in our Awards, that’s why we are highly regarded in the community,” said Fujiki.

One winning design that is being mass produced is the Smart Double Clip designed by interior designer Akihiro Toyofuku, who took home one of the 2018 Merit Awards.

“I found the traditional paper clip a hassle when flipping pages. (So) I looked at it and decided that a 23° angle might work better on a scaled-down version of a double clip,” he said in a press release. 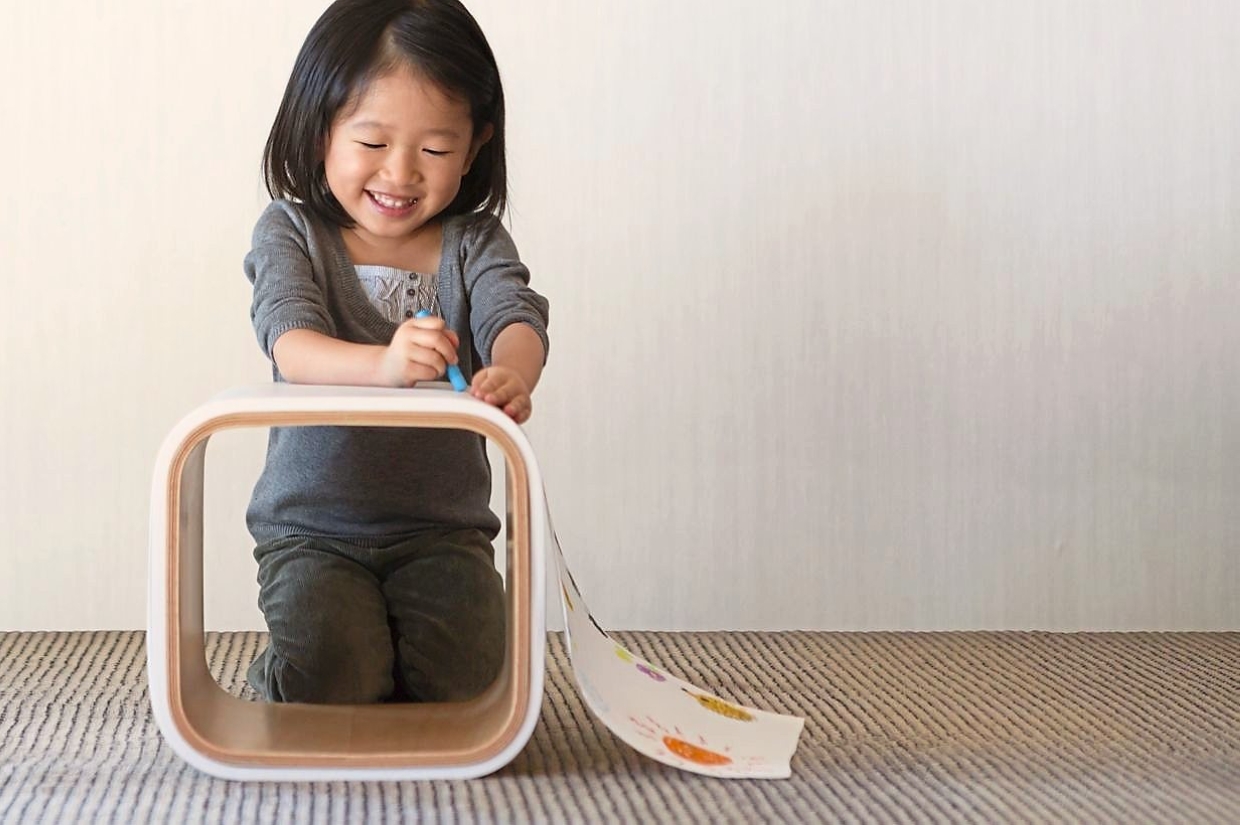 The Roll Table, which comes with 100m of paper rolled around it, is for kids to sketch or draw on. It was the Grand Prix winner of the 2011 Award.

Another notable Merit Award winner in 2018 was Palletballet, a colourful painting kit where children can freely express themselves through traditionally inspired wooden tools. Designed by a team of university students from India – Athul Dinesh, Ghufran Ahmed and Pranav Kishore Bidwe – the painting kit mimics the shape of toys.

“We sourced (the kit materials) from the traditional village of Channapatna, India, famed for its wooden toys craftsmanship. The idea is for children to freely move and utilise the Palletballet to draw, paint and express themselves, to be uninhibited and go beyond the normal boundaries that often exist for adults,” said the designers.

One of the most impactful designs to date, according to Fujiki, is the wooden Roll Table, which comes with 100m of paper rolled around it for kids to sketch or draw on.

“Kokuyo manufactures furniture and stationery, and this product successfully combines both of that,” shared Fujuki, adding that only 60 units have been manufactured so far, all of which were sold out within three hours.

The Kokuyo Design Award 2020 theme is depicted by a heart symbol.

“Instead of using words, we are using a symbol to go beyond language barriers and attract more participants from all over the world. We want people to come up with designs that follow their hearts,” said Fujiki.

Is handwriting a dying art and how does that affect the stationery business?

“Yes, in Japan, people are also writing less due to the digital world. However, based on some statistics, the business and art of writing is slightly increasing,” he said.

Fujiki then did some research and found that people still liked to put their ideas and thoughts down on paper, which was still the fastest way to capture them.

“So that’s the value and importance of stationery. The fountain pen is also regaining popularity and people are starting to comprehend the happiness of writing. So I think that because of this emotional value, writing can become popular again,” he ends.

For more details of the competition, visit kokuyo.com/en/award/