While he was undergoing a health check-up, Malaysian marine biologist Dr Yusof Shuaib Ibrahim had a question for his doctor: “Can you observe plastic in the human gut?”

(Photo above shows microplastics on a beach in the Canary Islands; marine animals end up ingesting 5mm pieces that can travel up the food chain and into human stomachs. Photo: 123rf.com)

Consultant gastroenterologist Dr Lee Yeong Yeh replied “no”, but he had also been wondering about this. The two soon started a research project to look into it.

Both men were on one of two lively plastics solutions discussion panels on the opening day of the International Congress for Conservation Biology (ICCB), held in Kuala Lumpur from July 21 to 25. (See story on the conference here.)

The panels presented a gamut of perspectives from researchers, activists, industry and the government.

plastics research. Dr Lee is a professor of medicine and consultant of gastroenterology at Universiti Sains Malaysia in Kelantan.

That seafood in Setiu, Terengganu, contains microplastics has been confirmed by the MRIG. Their published research analysed plastic pieces smaller than 5mm in size, in wild and farmed seabass (Lates calcarifer) and bivalves (Scapharca cornea).

The group is looking at the presence of plastics all along the marine food chain, right from marine worms (Polychaete) to humans.

“We are consuming the equivalent of one credit card per week from various sources,” said Dr Lee, pointing to new findings by WWF and the University of Newcastle Australia.

“What is the effect of this? Does plastic remain in the colon? Does it cause a reaction?” 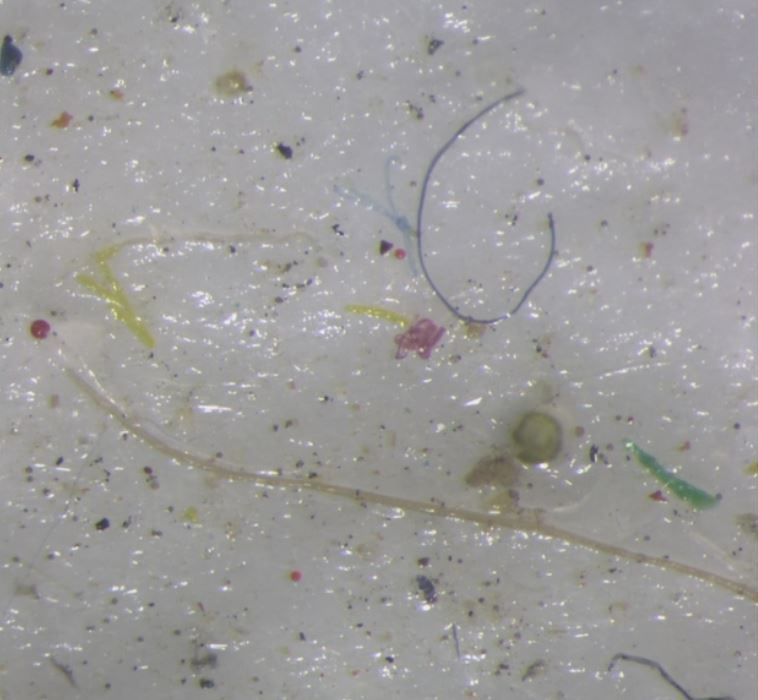 Microplastic is everywhere, even in parts of the planet previously thought to be pristine. This is a screen capture of a video showing microplastic found in ice core samples taken during the US-led Northwest Passage Project that took place in July and August 2019. Photo: Reuters

The doctor is particularly interested in a possible link to colon cancer: “Colon cancer is the fourth biggest killer in the world and the second largest cancer killer in Malaysia. And it’s going to be a major killer in the next few years.” The causes of colon cancer are “largely unknown”.

He is also keen to figure out if there is a connection between plastics in the gut and inflammatory bowel disease, an ailment that is on the rise in Asia.

“We know what plastic consumption can do to animals,” he said, listing symptoms ranging from leaky gut and increases in toxins to the translocating of bad bacteria into the blood.

While Dr Lee’s research is still on-going, he told us that “we have some interesting findings with significant health impacts” already.

We all need to make a strong call for research, awareness and plastic alternatives: “All of us should champion this.”

Yusof explained that the MRIG is actually conducting a larger microplastics programme that involves multiple disciplines and institutions.

“We are currently focusing on determining whether microplastics are present in marine organisms, plants, air, water, sediment and humans.

“More investigations are needed so as to credibly address the real impacts of these microcontaminants on the food web and their path and fate in humans.”

It is important to establish a good baseline for microplastic levels in the environment rather than conduct merely one-off studies. To this end, Yusof called for financial support from the government.

“As far as I am aware, the only scientific paper on comprehensive plastic pollution mentioning Malaysia is by Jenna Jambeck.”

He was referring to a seminal 2015 report estimating how much land-based plastic waste was entering the ocean. The report ranked Malaysia eighth in the world as a polluter.

Nagulendran added that research funding is available through two vehicles. One is the ministry’s Roadmap to Zero Single-Use Plastics 2018-2030. The other is the June Bangkok Declaration on Combating Marine Debris in Asean Region.

“Plastic pollution is an apex issue when it comes to the environment. We need everyone to come on board to address it.”

“If we continue with chemical components in our plastics, we will endanger our health,” declared Fabien Cousteau, ocean activist and filmmaker.

But is biodegradable plastics “the magic bullet?” countered Wee Ching Yun, chairperson, sustainability sub-committee of the Malaysian Plastics Manufacturers Association. “Will it eliminate all the pollution?”

Meanwhile, Craig Leeson, who spent eight years making the documentary A Plastic Ocean pointed out that “we all know the problems.

We believe we need to ban single-use plastic.” The film has been screened in over 90 countries.

“But plastic is a good material. We are talking about irresponsible people littering and the need for better collection and enforcement,” asserted Goh Eng Leong, managing director of BASF (Malaysia), one of the world’s biggest chemical companies.

The industry representatives made it clear that compostable plastic is already being produced. “It’s not a technical issue,” said Goh. “The whole ecosystem has to work.”

He has especially strong legs to stand on, as he hails from Jenjarom, Selangor, ground zero in Malaysia for the illegal plastics recycling scandal that has gone global.

“In Jenjarom, recyclers have been taking the valuable plastic while the rest has been washing away into rivers or is burned, creating toxic fumes.”

When local activists exposed the issue and lobbied hard, the government acted. Among the official reactions are introducing a 12-year roadmap to ban single-use plastics and returning illegally-imported plastic waste back to its origin countries, largely in the developed world.

“We have to correct this assumption that the main polluters are Asian,” said Leeson.

“When we analysed what we found in the ocean, we found it was largely produced in the US, Australia or Europe.

Wee said that Malaysia has negligible and scattered implementation of activities and facilities for composting and waste segregation.

“We must move to a circular plastic economy. And we need to change consumer behaviour.”

Cousteau agreed: “We’re under the delusion we need to consume every day.

“Modern marketing practices dictate that we need to use things and throw them away.

“Educating people not to use – not just single-use plastic but single-use anything – is the best approach.”