Malaysian online cooking stars are on the rise

Azie has shared thousands of recipes on her blog, but recipes for Kelantanese food like kuih akok (pictured here).

For thousands of years, recipes were gleaned from family matriarchs, passed down through oral tradition and observation.

As time progressed, recipes and the way they were transmitted evolved.

First, there was the advent of cookbooks, which began with the introduction of printing presses in the 15th and 16th centuries and proliferated in the 20th century as literacy rates shot up, creating stars out of authors like Julia Child.

In the 1990s, televised cooking shows burgeoned in popularity, resulting in the emergence of a new breed of recipe-providers: celebrity TV chefs.

Chefs like Chef Wan, Emeril Lagasse and Nigella Lawson impressed with recipes and tips that reflected their culinary training and F&B acumen.

Then came the early 21st century, where the Internet’s all-encompassing reach meant that recipes became easily available online on established platforms like Bon Appetit and Saveur.

But it was the advent of reality cooking shows like MasterChef which promoted talented home cooks, that really changed the game. It led to a widespread democratisation of home cooks, liberalised by the idea that their tried-and-tested recipes were worth sharing with a wider audience. 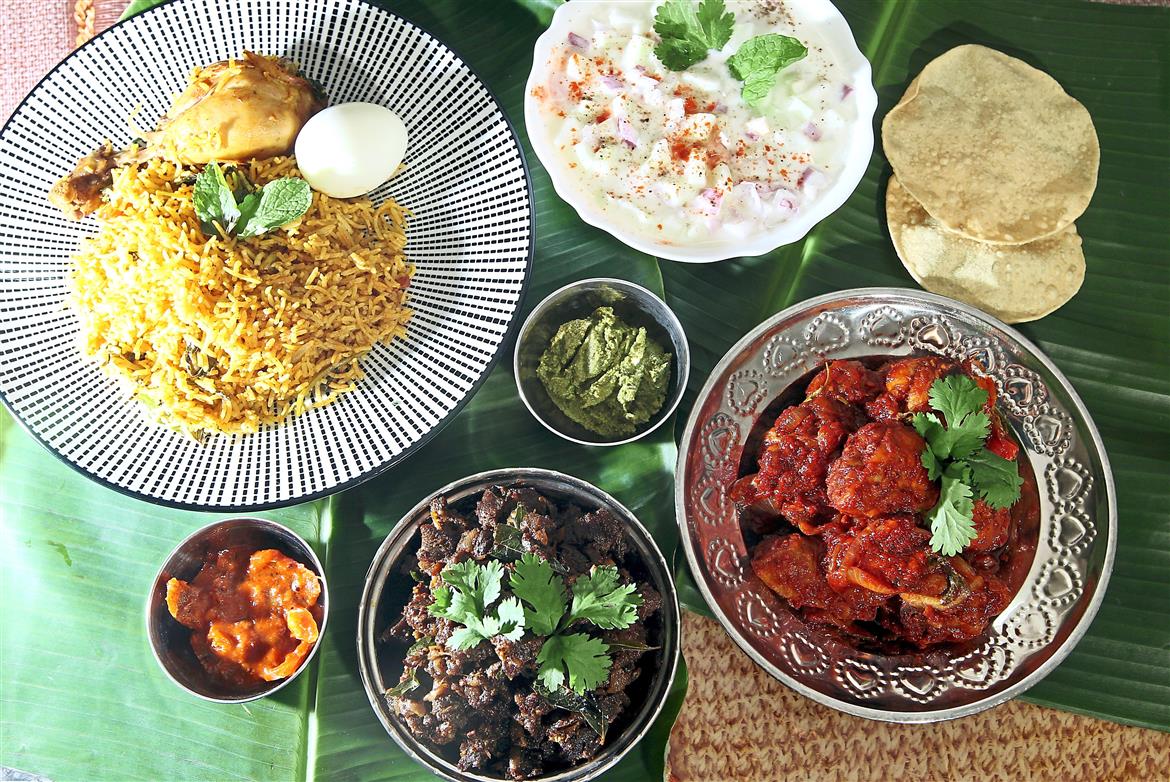 Within these platforms, some have thrived remarkably well and this in turn has spurred the birth of online cooking superstars, whose recipes and tutorials are eagerly-anticipated and emulated by today’s time-strapped generation who look to them as realistic models of what can be achieved in home kitchens.

Here are three in Malaysia who have found phenomenal success sharing their recipes with others.

Her parents owned an Indian restaurant and her grandfather was a cook in a restaurant. Sheena began actively cooking in her teens. 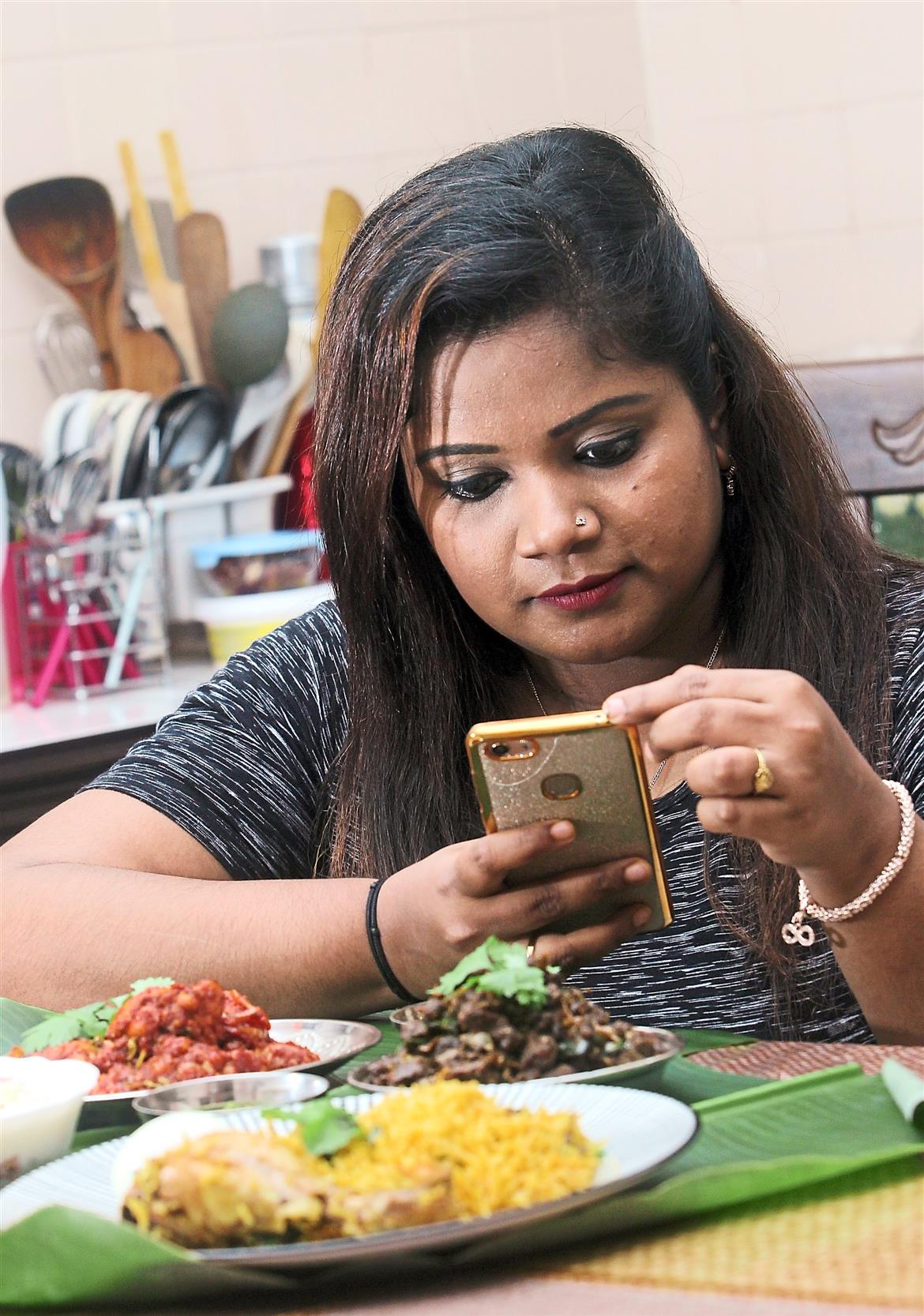 Sheena uses her phone to take step-by-step videos and pictures of her food as she is cooking, and says that it only takes her about two hours to cook and post her recipes.

But it was only after giving birth to her son in 2015 that she started posting her recipes on a popular Malay online recipe-sharing platform.

Her recipes were instant hits. Spurred by that success, Sheena started a Facebook page called Sheena’s Cooking Passion in April 2016, documenting recipes from her impressive repository. The page now has over 160,000 followers and Sheena hasn’t spent a cent to boost her page.

“For me, quantity doesn’t matter, quality does. If I post a fish sambal recipe, you can use any fish to make it. Some pages will post a sambal recipe for different fish – so the recipe is the same, the only difference is the fish. I can do that to make it seem like I have thousands of recipes, but I don’t want to do that,” she says.

As Sheena works full-time as an administrative executive, she only cooks after she gets home and on weekends. Her recipes are trawled from her mother’s arsenal as well as YouTube and Google, which she uses as inspiration before adding her own modifications.

Sheena cooks alone (although her mother and mother-in-law sometimes pitch in) and uses her phone to document the user-friendly step-by-step processes that she lists on her Facebook page. Sometimes, she does videos too.

“I’d usually cook on low heat, so I have time to take pictures. If I’m doing a video, I do it in pieces, and then cut and join everything in the end. I do everything with my phone; I think it’s easier. And the whole process only takes me about two hours – from cooking to posting,” says Sheena.

Like most popular personalities in the online world, Sheena sometimes gets negative feedback. She had had people complaining about a myriad of things – from the fact that she used to post her recipes in Malay to the way she adds salt with her hands. 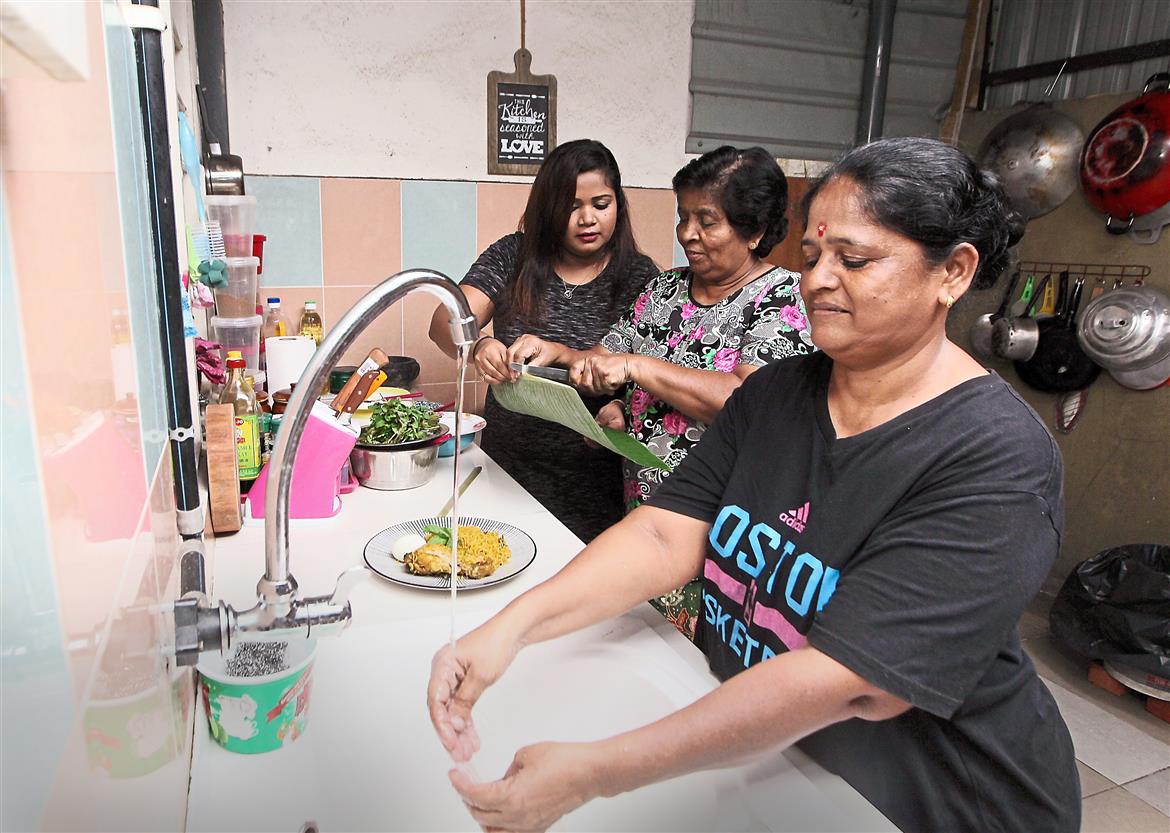 Although Sheena usually works alone, her mother Julaigah Kassim (centre) and mother-in-law Saroja Subramaniam often help her with the cleaning up.

“I was about to quit. I was so depressed because there was so much negativity, but I decided to move on from that. Now I think if you like my recipes, you like it, if you don’t, you don’t,” she says.

Even more awe-inspiring is the fact that Sheena has remained altruistic and doesn’t want to monetise her popularity in any way.

“I was approached by a few companies to monetise my page, but I politely rejected them. I’m not here to make money. I want my followers to get the recipes free on Facebook,” she says.

Asked why people like her recipes, Sheena thinks it’s because her recipes are easy to follow, even for new cooks.

“I believe that my recipes are authentic. It’s back-to-basics, you don’t need fancy woks or expensive things to cook. And it’s very beginner-friendly, so even if you have zero knowledge on cooking, you can refer to my page,” she says.

Haziah Jaya, better known as Azie, is a sweet, impeccably-groomed lady who is also a culinary powerhouse in the online world. The 50-something Azie grew up in Kelantan with a mother who made excellent kuih-muih, which she sold to restaurants. Azie was equally enamoured with food and started cooking and collecting recipes in primary school.

“When I go anywhere and taste anything delicious, I’d find ways to get that recipe. Sometimes I’d even track people down and get them to teach me,” she says. 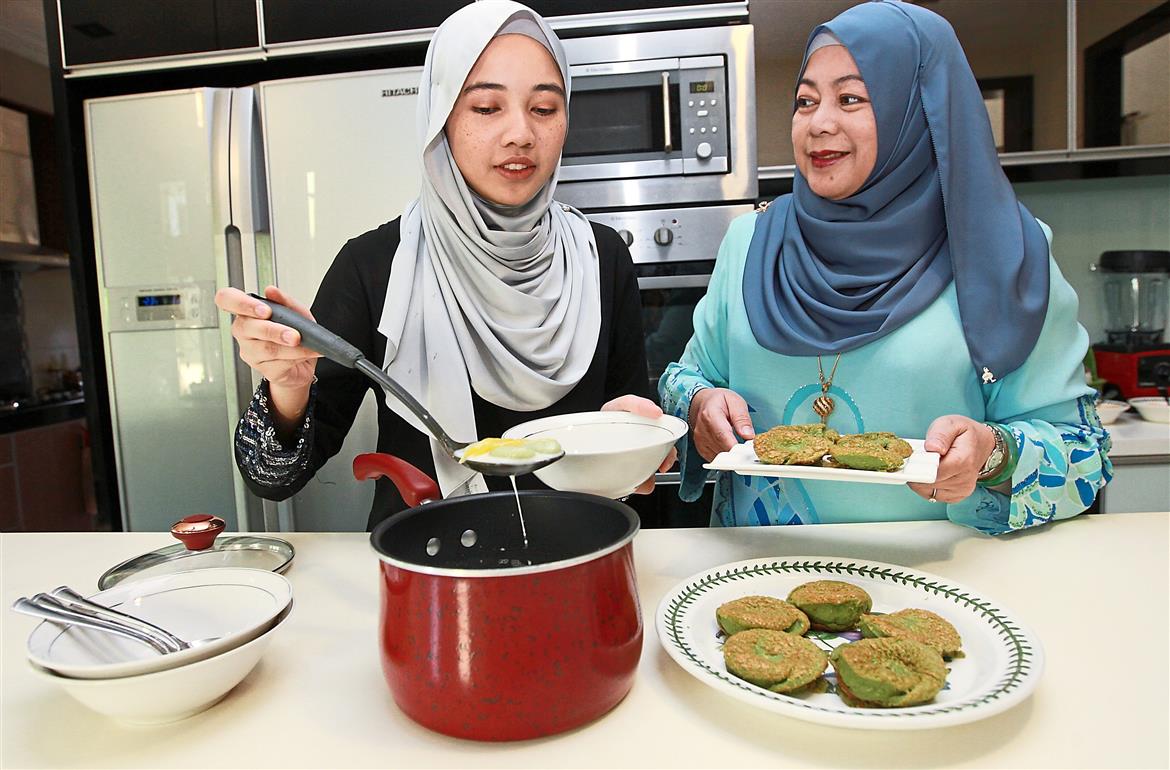 Azie's daughter, Juita Amanda Abdul Ghani, is also a talented baker who helps her mother in the kitchen when she is home from studying abroad.

When Azie grew up, got married, and had her five children, cooking was relegated to festive occasions as she was understandably busy. It was only in 2011, when her kids were more grown up and she was established in her career as a manager with the central bank that she found the time to cook.

So she started a cooking blog called Azie Kitchen, at first as an attempt to document her recipes for her daughters. But the blog’s popularity soared (to date, it has had 172 million views), and Azie eventually diversified her reach, posting on Facebook and Instagram (she has over 100,000 followers on each platform) as well as sharing cooking videos on YouTube where she has over 20,000 subscribers.

Initially, Azie started out sharing traditional Kelantanese recipes like nasi kerabu, lompat tikam and ketupat sotong, mostly because she was frustrated by the poor Kelantanese fare in KL. Although her Kelantanese recipes are popular, she now also shares recipes for other Malay dishes like ikan cencaru sumbat, sambal ikan bilis Melaka and rendang ayam cili padi, among thousands of others. To date, she has shared over 2,000 recipes, all of which feature her detailed, step-by-step tutorials with accompanying images. 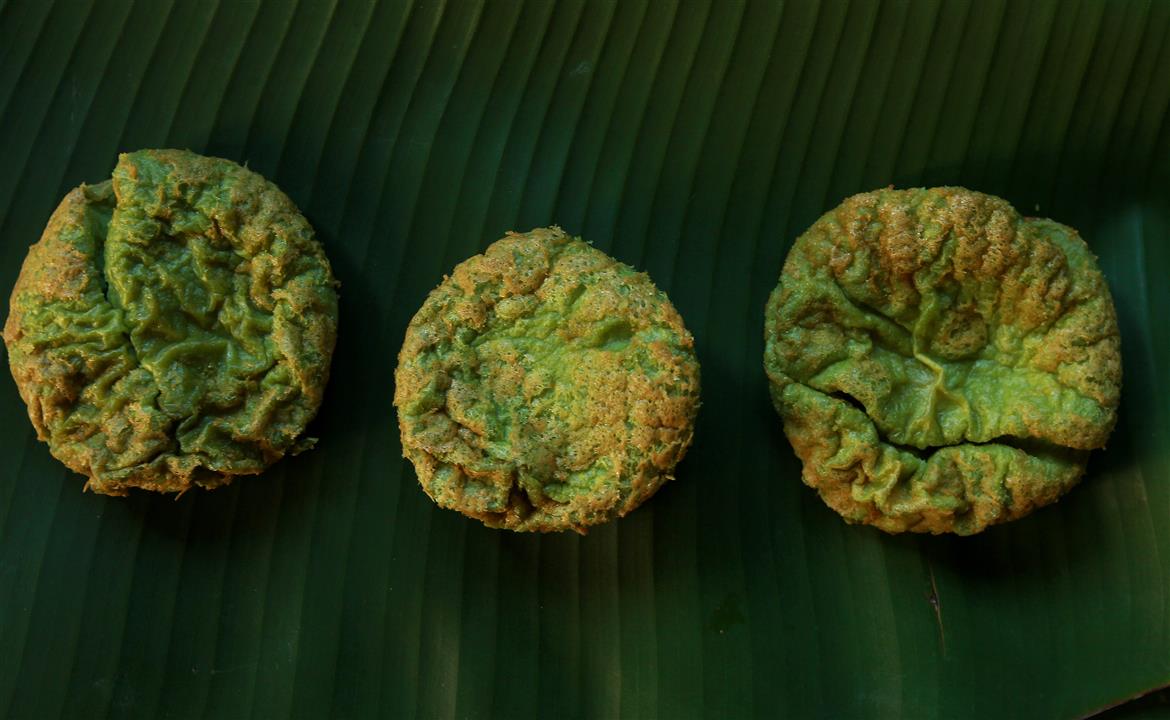 Azie has shared thousands of recipes on her blog, but recipes for Kelantanese food like kuih akok (pictured here) remain the most popular.

Azie posts recipes nearly every day and uses her phone to take videos for YouTube and a camera to take pictures of the food for her blog.

Her meals are photographed as they are, because her hungry family consumes the food soon after.

“I don’t have time to put props and decorate – as soon as it’s done, we eat. It’s real cooking,” she says.

Azie is also rigorous about checking measurements before posting her recipes. She says the agak-agak (guess-timation) method is the reason why so many heirloom recipes fail to be passed down through the generations.

“If you continue doing that, your children won’t be able to follow the recipes. When I do my recipes, I check the actual amount and write the actual amount. That’s why it’s very time-consuming, but if you really want to share your recipes, that should be the way,” she says.

While Azie has been able to monetise both her blog and her YouTube page, she gives back most of the money she earns in zakat.

“When I started, I didn’t want any financial gains. But now I believe that by earning, I am contributing back again,” she says.

Given Azie’s popularity, she has been offered numerous television deals (all of which she has turned down). She also gets recognised frequently at social occasions.

“Sometimes, at weddings, people come and take pictures with me instead of the bride and groom!” she says, giggling.

The affable Lim started cooking at 13 to feed his father and younger brother after his mother passed away.

But it was only after marrying his wife that he started cooking more frequently and posting photos of his food on his Facebook page. 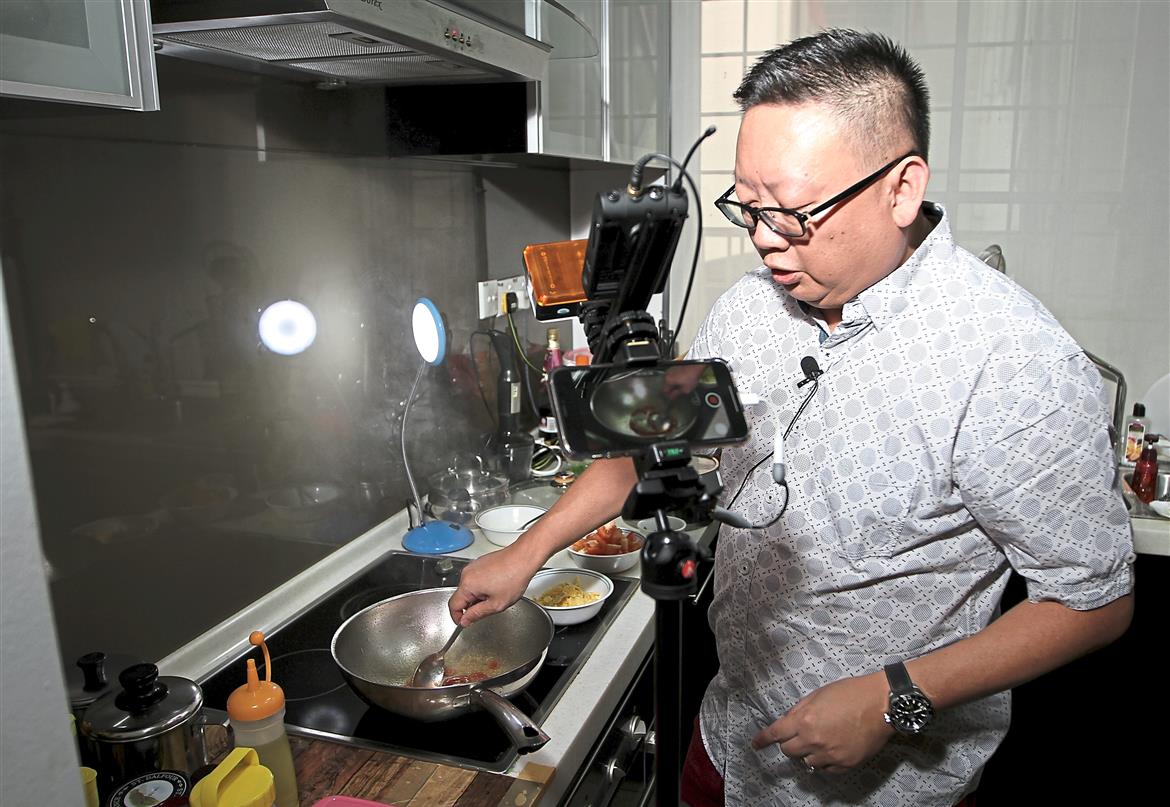 Lim continues to invest in gadgets to upgrade the sound, lighting and visual quality of his videos as it’s his favourite format for posting recipes. — Photos: YAP CHEE HONG/The Star

After some encouragement from friends, Lim started a Facebook page called Cooking Ah Pa (Ah Pa means father and is what his son calls him) at the end of 2016 .

Six months ago, he started a dedicated YouTube cooking page, which is now his main focus as he prefers the video format.

Although Lim is a newbie on the scene, he already has over 10,000 followers on Facebook and nearly 10,000 subscribers on YouTube.

They are hooked on his Chinese dishes like quick-fry prawns with oyster sauce, sweet and sour pork, chicken with shiaoxing wine, Cantonese-style steamed garoupa and Chinese spinach soup (his most popular video, with over 170,000 views).

Interestingly, none of Lim’s videos have accompanying recipes – he merely provides a rough tutorial, and crazily enough, people seem to love it! 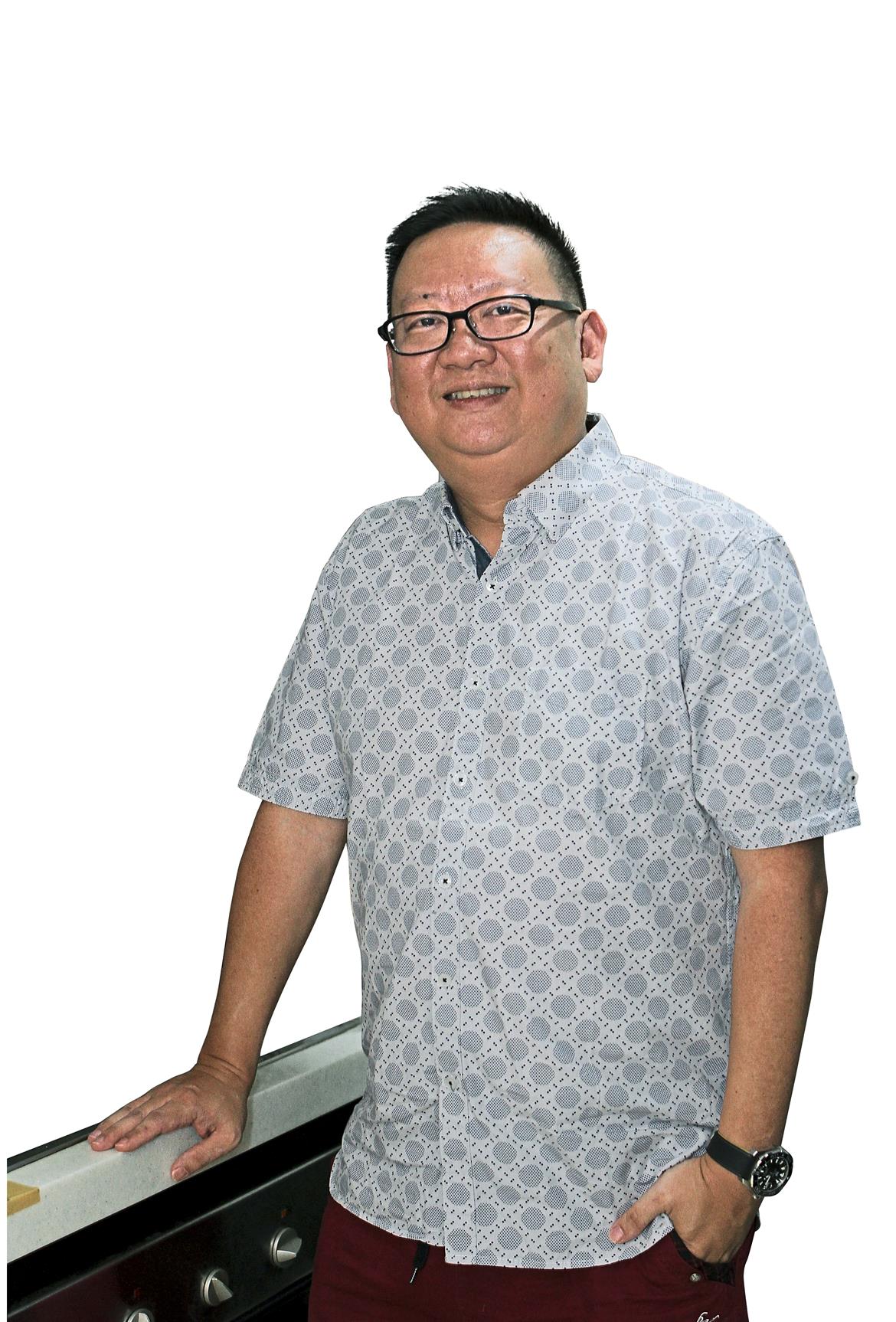 “To me, a recipe is not important for cooking. I prefer to give cooking ideas, because so many factors can affect how your dish turns out even if you follow a recipe – your stove, the utensils you use – all these things will make a difference,” he says.

Lim works full-time and is the president-elect of the Malaysian Institute of Estate Agents, but he still cooks every day, as family bonding is important to him. That also explains why he is so prolific – he has posted 195 recipes in 200 days!

To improve the audio-visual quality of his videos, Lim has spent quite a bit of money on gadgets like a stabiliser and wireless microphone. Much of his learning has been through trial-and-error, including dropping a smartphone into boiling hot garlic oil while making a video!

“Compared to other YouTubers, my videos are some of the worst because I am an amateur. I’m slowly improving, ” he says.

But perfection is not one of Lim’s goals anyway. In fact, he doesn’t even bother hiding mistakes he makes while cooking.

“In my videos, there are many times where I say, ‘Eh, sorry I forgot to add that’ or ‘I should have done that’. I want to show what happens in a real kitchen. So with my videos, whether I succeed or fail, or I only reach 70%, that is what you’ll see,” he says.

Lim’s pragmatism extends to monetising his videos, which he did as soon as he could. “If I can make money doing something I enjoy, why not?” he says.

Lim thinks much of his unexpected success is due to his user-friendly material.

“I digest what the Chinese professional chefs are doing and make it simpler. I am trying to tell people that home-cooking is not as tough as you think it is,” he says.

Malaysian online cooking stars are on the rise