Depending on the snake species and amount of venom injected, symptoms can appear within a few minutes to hours after being bitten.

What would you do if you got bitten by a snake? Scream and run away? Kill the snake then suck on the wound to get the venom out?

On the contrary, these are some of the things you should absolutely not do after getting bitten by a snake.

In Malaysia, the most common venomous snakes are the cobras and the pit vipers. The King Cobra, the largest venomous snake in the world, have become household pests, and are often found in palm oil plantations and forested areas in Malaysia.

Dr Vincent Teo Eng Wah, a wildlife photographer and herping enthusiast from the Sports Centre of University Malaya, said that King Cobras can be found where there are plenty of snakes, as 95% of their diet consists of other snakes.

The most common snakebites resulting in fatality in Malaysia are from cobras.

Dr Ahmad Khaldun Ismail, a senior lecturer and consultant emergency physician in the Hospital Canselor Tuanku Muhriz, Universiti Kebangsaan Malaysia Medical Centre, and the current President of the Malaysian Society on Toxinology (MST), has long been an advocate for generating more awareness on how to deal with snakebites and envenomation.

He recently gave a talk at the Malaysia Nature Society headquarters on snake venom and snake bites. He explained that out of the around 140-160 known species of snakes in Malaysia, only one fifth are potentially dangerous. These mostly include snakes equipped with venom and a few without venom.

A common misconception is that all snakes are venomous and a snake bite will result in immediate death.

Take, for example, the case of one of his snakebite patients who was a car mechanic. While working in his garage, he had been bitten on his thumb by a snake.

Without knowing if it was dangerous or not, and too scared to take any chances in case the venom spread, he immediately chopped off his thumb.

He took the severed thumb to the hospital and reported that he had been bitten by a snake. However, he did not know what type of snake it was and couldn’t describe it.

The doctors examined the man and discovered that he did not show signs of envenoming and he had no reason to cut off his thumb. However, to save the man from additional trauma, the doctors did not reveal this to him and instead sewed his thumb and told him that he would be fine in a few weeks.

“This is what happens when there is not enough public awareness,” warned Dr Khaldun.

An excited family attended the Snake Venom talk by Dr Khaldun on the 29th of July 2017 at the Malaysian Nature Society headquarters in Bukit Persekutuan. The little boy enjoyed looking at the 2 meter long rat snake and the King Cobra.

The biggest myth about first aid in snake bites is that right after you are bitten, you should tightly tie up the area that’s been bitten to prevent the venom from spreading throughout your body.

However, according to Dr Khaldun, this is not necessary and will actually cause more harm than good because the tight tourniquet will also block blood flow, injure the nerves and cause tissue death.

“For all you know, the snake that bit you is not dangerous,” he said.

You also shouldn’t massage or move the area that is bitten because it will result in faster spread of venom throughout the body and cause systemic envenoming.

One encounter that Dr Khaldun had was with a man who got bitten by a snake, went to see a bomoh, and “miraculously” lived. However Dr Khaldun emphasised that this was because the snake that had bit him was not even venomous. “There is no such thing as ‘miracle’ healing for snakebite envenoming,” said Dr Khaldun.

According to Dr Khaldun, depending on the snake species and amount of venom injected, symptoms can appear within a few minutes to hours after being bitten.

Neurotoxins from snakes such as cobras manifest earlier symptoms than haemotoxins from pit vipers.

Local symptoms of a venomous snakebite include pain, tissue necrosis, swelling and blisters around the bitten area.

Some snake venom can also affect blood clotting components and cause bleeding issues such as hematomas or bleeding in the brain.

Other common neurological symptoms once you are bitten are drowsiness, paralysis and convulsions.

A graphic of the Dos and Donts when getting bitten by a snake that was passed out by Dr Khaldun from Hospital Universiti Kebangsaan Malaysia (HUKM).

That is why it is crucial to remain calm after getting bitten to prevent the venom from spreading all over the body.

Some venomous snake bites, however, may not display significant symptoms even hours after the victim has been bitten. This is because a snakebite without delivery of sufficient amount of venom may not show clinical signs of envenoming.

However it is still dangerous and should be treated immediately.

Although not all snakes that bite are venomous, it is crucial to treat every snakebite as potentially dangerous because non venomous snake bites can also cause infection or significant tissue injury.

Another snake myth is that certain chemical sprays or powders such as sulphur or essential oils will keep snakes away due to their strong smells. There have been many tests carried out to see if snakes will cross sulphur laden rooms, and unfortunately, they do.

In fact, according to pestproducts.com, if a snake makes contact with sulphur, the sulphur may get caught in its scales and cause irritation. This will make the snake even more aggressive and dangerous towards humans.

According to Dr Khaldun, the first thing is to calm down and rest. You should reduce movement and immobilise the affected limb to slow down the circulation of the venom in the lymphatic system.

A reticulated python that was rescued and taken care of by a group of snake handlers called ExoPetz that showcased their snakes during Dr Khalduns, from Hospital Universiti Kebangsaan Malaysia (HUKM), talk on Snake Venom at the Malaysia Nature Society headquarters in Bukit Persekutuan on Saturday 29th July 2017. Photo: The Star/Tasnim Syakirah

Do not rub, massage, aggressively wash and scrub or apply anything to the bitten area. It will be useful to try and take a photo of the snake that has bitten you so that it will be easier for doctors to make a diagnosis and provide the appropriate treatment.

Victims of snakebite on islands or remote areas will have to be transferred to the government clinics and subsequently to the district or major hospital to get the optimal treatment.

Another common misconception that victims of snakebite have, are that when they are transferred to the hospital, they get immediate treatment such as injections, sedation or even surgery.

“This is the wrong perception. People often complain that the doctors and nurses don’t do anything, they just come in and out to look. But that is the right thing to do. The doctors and nurses should be checking up on the patients’ vital signs, taking serial blood tests and observing the progression of the pain, swelling, blisters or necrotic wound as frequently as possible,” said Dr Khaldun.

One of the most frightening encounters for Dr Khaldun was when doctors mishandled a seriously envenomed patient and used inappropriate treatment to treat the snakebite, such as administering the inappropriate antivenom or incising the bitten limb.

He said that he has seen and encountered this scenario many times. His interest in snakes and snakebites occurred a long time ago when he encountered a snakebite patient and did not know the snake species and how to treat the patient.

Although the patient was discharged well, he later found out that the treatment advised was wrong and inappropriate. “That was the moment that I figured I had to do something to improve this problem in Malaysia. It is about fighting for the patient’s right for optimal and appropriate care in the area of clinical toxinology, which is in its infancy, if not neglected, in Malaysia.”

Dr Khaldun from Hospital Universiti Kebangsaan Malaysia (HUKM) telling the story about a snake bite victim who chopped off his thumb. He said this during his talk on Snake Venom at the Malaysia Nature Society headquarters in Bukit Persekutuan on Saturday 29th July 2017. Photo: The Star/Tasnim Syakirah

But as the saying goes, “prevention is better than cure”, and Dr Khaldun stressed that public awareness on how to avoid getting bitten by snakes is the key to reducing snake bite cases.

To really prevent snakes from encroaching into our lives, you will need to get rid of their shelter and food source, which consists mainly of rodents and other snakes.

Cluttered areas such as old furniture and rubbish heaps are the perfect place for snakes to relax and cool down.

In addition, if the house or neighbourhood is dirty and attracts a lot of rats, you can be sure that snakes will slither your way.

Snakes are an important part of our wildlife, nature and ecosystems and are in fact more afraid of humans than we are of them. They’re “shy” by nature and often avoid confrontation.

Snakes will only bite when they feel threatened or have been harmed (eg stepped on). Some snakes can actually be pretty cute and friendly, and make great pets.

However, make sure to keep a safe distance from them and respect their space. Only then can you enjoy their company.

Note: More info can be obtained from the Malaysian Society on Toxinology (MST) website http://mstoxinology.blogspot.my. 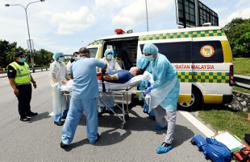 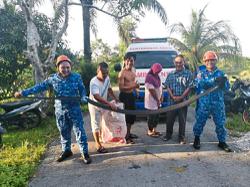