Microplastics could be in our blood

The presence of microplastics in the environment can result from the weathering and breaking down of improperly-disposed plastic products, among other sources. — Photos: Filepic

The consequence is inevitable human exposure to its effects on health.

Microplastics result from a variety of plastics, including from the breakdown and weathering of plastic objects, clothing, paint and car tyres.

They may be deliberately added to products such as cosmetics and abrasive cleaners.

They are of various sizes and shapes, and made of complex chemical substances.

Biofilms that grow on microplastics may also be a source of harmful microorganisms.

Their omnipresence raises serious concerns about their effects on human and animal health.

Humans are exposed to microplastics by ingestion of food and water, inhalation and skin contact due to their presence in food, air and various products used in daily life.

Tons of microplastics reach the sea to enter the food chain via ingestion by marine life, sea salt and drinking water.

Microplastics have also been reported to be found in edible fruits, vegetables and store-bought rice.

Microplastic exposure may be toxic to all biological systems.

The inability of the immune system to remove the synthetic particles may lead to chronic inflammation and increased risk of cancer.

Microplastics may also release their constituents, contaminants and pathogenic organisms.

However, knowledge of microplastic toxicity is still limited.

They have been reported to be found in human faeces, as well as in food, drinking water and the air we breathe in.

On March 24 (2022), a pioneering human biomonitoring study published in the journal Environment International, reported the detection of microplastics in human blood for the first time.

The researchers analysed blood samples from 22 healthy adult volunteers and found quantifiable microplastic particles in 17 of them (77%). 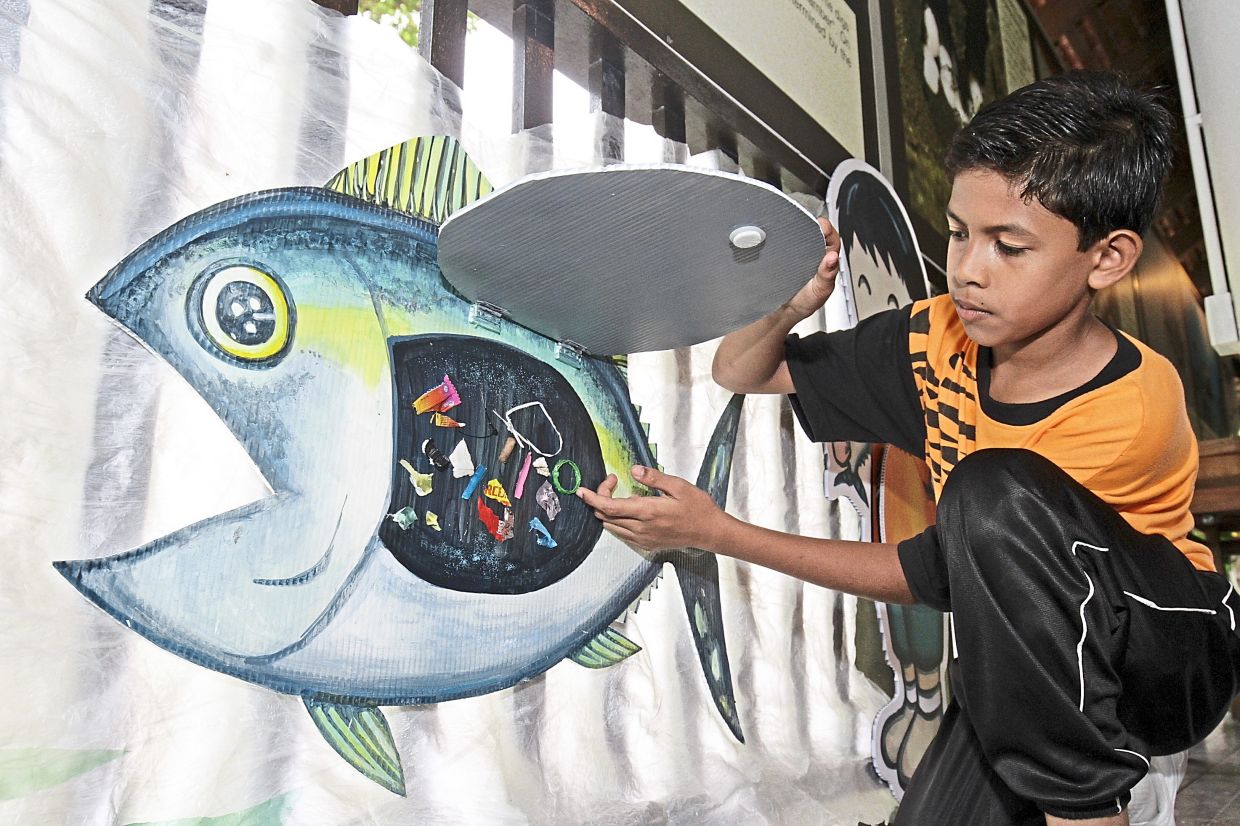 A student flips open an art piece to reveal the plastic products ingested by marine animals, which might in turn be consumed by humans.

The authors concluded that their finding “supports the hypothesis that human exposure to plastic particles results in absorption of particles into the bloodstream.

“This indicates that at least some of the plastic particles humans come in contact with can be bioavailable and that the rate of elimination via e.g. the biliary tract, kidney or transfer to and deposition in organs, is slower than the rate of absorption into the blood...

“It remains to be determined whether plastic particles are pre-sent in the plasma or are carried by specific cell types (and to which extent such cells may be involved in translocating plastic particles across mucosa to the bloodstream).

“If plastic particles present in the bloodstream are indeed being carried by immune cells, the question also arises, can such exposures potentially affect immune regulation or the predisposition to diseases with an immunological base.”

Data from global studies have reported the occurrence of plastic particles in gut contents, air, water, sediment and food. 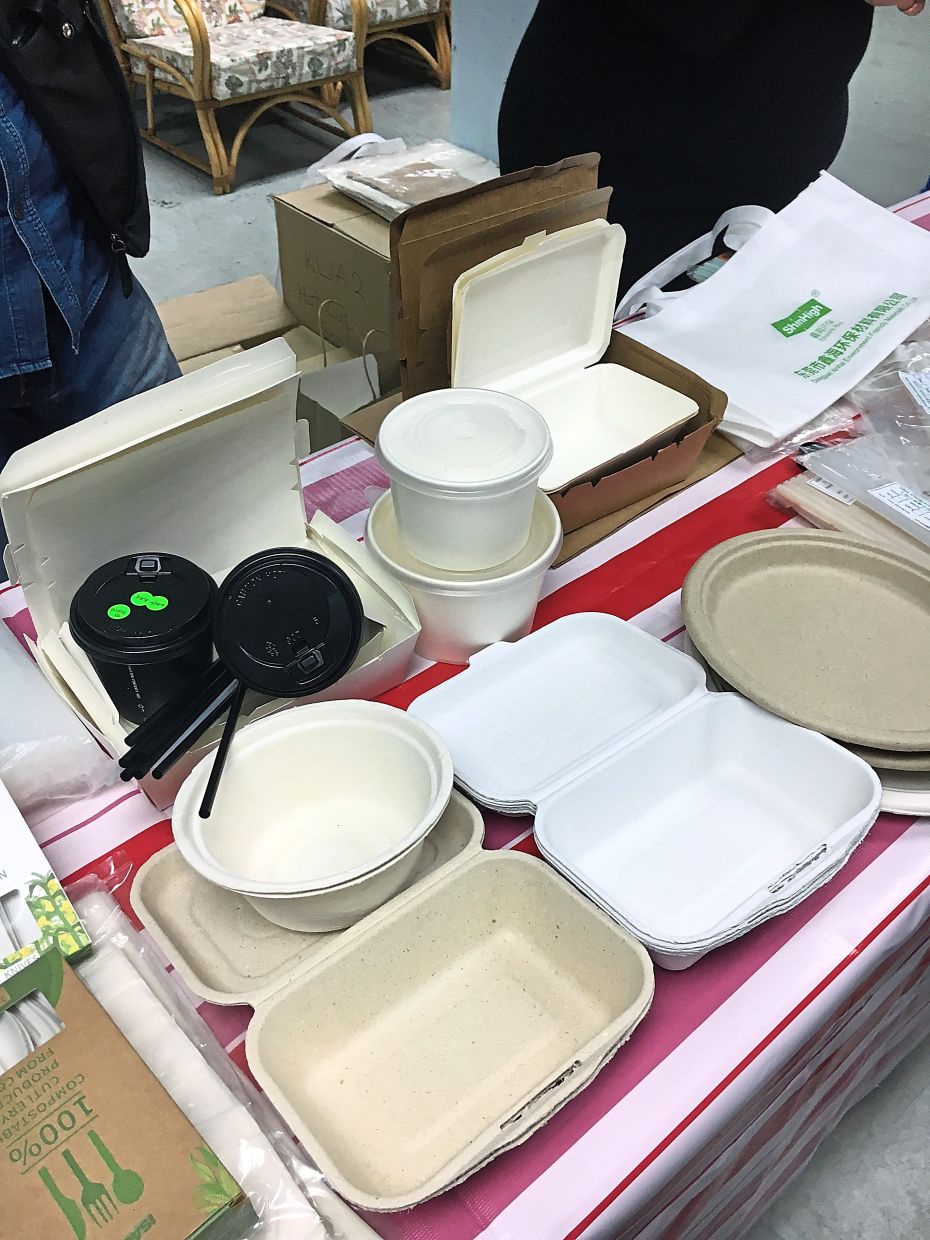 One way to help decrease microplastic pollution is by replacing plastic products with biodegradable ones.The majority of data involved particles above 10µm or 50µm.

There have been fewer studies on submicron-sized particles reported in seawater.

Other researchers have reported that microplastics can deform the outer membranes of red blood cells and affect their function.

Microplastics have also been found in human faeces, colectomy specimens and placentas.

While the sample size of the study was small and there was lack of data on the volunteers’ exposure level, scientists like Fay Couceiro of the University of Portsmouth in the United Kingdom have told AFP that the study was “robust and stand up to scrutiny.”

The study’s co-author Dick Vethaak told The Guardian: “Our study is the first indication that we have polymer particles in our blood – ​it’s a breakthrough result.

“But we have to extend the research and increase the sample sizes, the number of polymers assessed etc.

“It is certainly reasonable to be concerned.

“The particles are there and are transported throughout the body.”

He added that microplastics were 10 times higher in babies’ faeces, compared with adults, and that babies fed with plastic bottles swallow millions of microplastic particles daily.

He asked: “The big question is, what is happening in our body?

“Are the particles retained in the body? Are they transported to certain organs, such as getting past the blood-brain barrier?

"And are these levels sufficiently high to trigger disease?

“We urgently need to fund further research so we can find out.”

Currently, there are gaps in the knowledge on the additives used in the plastics industry, their fate when microplastics are disposed into the environment, and their consequent effects on human health.

A review article published in the journal Exposure & Health on March 22 (2022) stated succinctly that: “More detailed research on how micro- and nanoplastics (MNPs) affect the structures and processes of the human body, and whether and how MNPs can transform cells and induce carcinogenesis is urgently needed, particularly in light of the exponential increase in plastic production and the ensuing accumulation of non-degradable MNPs, the problem is becoming more urgent with each day.”

Global plastic production is expected to double by 2040.

Current data indicates that the overexploitation of plastic products and unsystematic dumping have adverse consequences for human health.

Everyone has a right to know what plastics are doing to our bodies.

However, the scientific community needs time to come up with definitive answers.

In the meantime, everyone can do their part by reducing usage of plastics (biodegradables are an alternative) and not dump plastics indiscriminately.

The authorities have a duty to ensure that plastics policy and management do not impact negatively on human health.

If there is no such policy, then it is time to formulate one urgently.

The policy should, among others, include laws on plastics standards and packaging, systematic plastic waste disposal, and import and export of plastic waste; as well as strategies for public health education and to ensure that all plastic packaging used are recyclable, reusable or compostable by a targeted date.

Covid-19: To go from pandemic to endemic, our health strategies need to be reformed

Ovarian cancer is often diagnosed late because of its vague symptoms 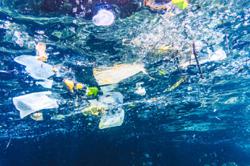