Common STDs teenagers can be infected with 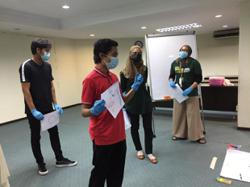 Only 12% of Malaysian teenagers who have had sex have used condoms, putting the vast majority of sexually-active local teens at risk of contracting STDs. — TNS

In a study carried out in Singapore, there was an increase in individuals aged 10 to 19 years diagnosed with sexually-transmitted diseases (STDs), which peaked in 2007 with 820 cases.

This study found that over 90% of all adolescent sexually-transmitted infection cases were made up of those aged 15 to 19.

Although the numbers diagnosed have since declined, there was a slight increase in numbers in 2015 with 421 teens diagnosed with STDs (8% increase from the year before).

The number of STDs in this age group trended down and up again in the latest data in 2018.

Adolescence is based on the Latin word adolescere or “to grow up”.

Normal adolescent psychosocial development may be characterised by a desire for autonomy and an increase in risk-taking behaviours.

The reasons for adolescents being at increased risk for acquiring STDs are mainly behavioural, but also in part, biological.

Behavioural factors associated with acquisition of STDs mainly surround sexual practices such as inconsistent condom use and having multiple partners.

Several biological factors have been hypothesised to influence the risk of acquiring STDs in adolescents.

One such factor is immaturity of the cervix (the area that connects the uterus and vagina), which may make it easier for infections by sexually-transmitted organisms such as those causing gonorrhoea, chlamydia and the human papillomavirus (HPV).

The increased risk may also be influenced by the microbial (bacterial/viral/fungal) environment within the cervix and vagina, which may be particularly variable after puberty and during the first sexual experiences.

This microbial environment plays an important role in immune responses.

Singaporean experts have found that many Singaporean teens simply chose to forgo using condoms despite having adequate knowledge regarding protection.

They also found that a larger number of teens had sex at an early age, before they reached 16, and many had several sexual partners before reaching adulthood.

(Editor’s note: According to the 2017 National Health and Morbidity Survey in Malaysia, only 12% of sexually-active Malaysia teenagers used condoms; 7.3% of teenagers aged between 13 and 17 had had sex by the time they were in Form Four; and 21% of boys and 11% of girls who have had sex, have had multiple sex partners.)

The most commonly seen STD in adolescents is chlamydia, followed by gonorrhoea and genital warts, which are caused by HPV.

Protection against STDs involves the individuals and the availability of good access to sexual health education, which encompasses sex, pregnancy and STDs, as well as resources surrounding STD health and counselling services.

At the individual level, STD prevention efforts should include consistent use of barrier methods such as condoms, and keeping monogamous sexual relationships

Vaccinations are strongly encouraged and these include vaccinations against HPV and hepatitis B.

Symptoms of STDs to look out for include abnormal discharge that may be associated with an unusual smell, colour and bleeding, and an increase in such symptoms.

You may also experience pain or an itch, as well as pain on passing urine or an increase in the frequency of passing urine.

You may have pain in the abdomen, pain during sexual intercourse or have painful (or painless) ulcers in the perineum.

The appearance of warts either internally or outside the vagina in the perineal area is due to HPV.

Recent infections caused by hepatitis B and HIV may have more non-specific symptoms such as fever, malaise, nausea, headache and rash.

This is why early testing in those who suspect that they may have an STD, even without obvious symptoms such as discharge, is important.

Get an early review and diagnosis of your STD to get better and more expedient treatment outcomes.

Your doctor may also provide counselling for partner testing and treatment, risk reduction advice and vaccinations for the prevention of certain other STDs.

A variety of STDs have a cure and the earlier the diagnosis is made, the higher the chances of a cure.

To avoid re-infection, your partner (if you are in a monogamous relationship) should also be tested and treated as early as possible.

Dr Ezlyn Izharuddin is a general practitioner (GP) in Singapore. For more information, email starhealth@thestar.com.my. The information provided is for educational purposes only and should not be considered as medical advice. The Star does not give any warranty on accuracy, completeness, functionality, usefulness or other assurances as to the content appearing in this column. The Star disclaims all responsibility for any losses, damage to property or personal injury suffered directly or indirectly from reliance on such information.