Children with Covid-19 might show gastrointestinal symptoms first, rather than the more typical respiratory symptoms. — AFP

Children with gastrointestinal symptoms, but without associated respiratory problems, could be infected with the SARS-CoV-2 virus that causes Covid-19, warns a new Chinese study.

The study, published in the journal Frontiers in Pediatrics, suggests that children admitted to hospital for non-respiratory symptoms could nonetheless test positive for Covid-19.

“Most children are only mildly affected by Covid-19 and the few severe cases often have underlying health issues.

“It is easy to miss its diagnosis in the early stage, when a child has non-respiratory symptoms or suffers from another illness,” explains study main author Dr Li Wenbin of the Tongji Hospital Department of Pediatrics in Wuhan, China.

In the study, Dr Li and his team detail the clinical features of five children admitted to hospital with non-respiratory symptoms, who were later diagnosed with pneumonia and Covid-19.

One of them had been admitted for kidney stones and another for head trauma.

“While their initial symptoms may have been unrelated, or their Covid-19 symptoms were initially mild or relatively hidden before their admission to hospital, importantly, four of the five cases had digestive tract symptoms as the first manifestation of this disease,” say the researchers.

The study, which points to gastrointestinal symptoms in children as a first manifestation of potential Covid-19 infection in the gastrointestinal tract, notes that receptors in the lungs targeted by the SARS-CoV-2 virus are also found in the intestines.

While digestive disorders are indeed recognised as symptoms of Covid-19, they are described as “atypical” when compared to “classic” signs that correspond to viral infection of the respiratory tract, such as coughing.

Although Covid-19 tests can sometimes result in false positive diagnoses, Dr Li is convinced that all five children were infected with the disease.

But given the very small number of patients, he points out that further research on similar clinical cases will be needed to confirm the hypothesis of initial infection via the gastrointestinal tract in children. – AFP Relaxnews

How to talk to your child about Covid-19

How Covid-19 can affect your child

Nausea and diarrhoea could also be symptoms of Covid-19 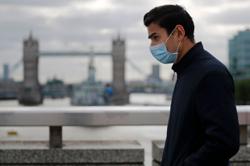 Into the fog: How Britain lost track of the coronavirus