Leukaemia and lymphoma have a good survival rate

Dr Ng, seen here with his latest book, notes that lymphomas can be cured even if they are detected at a late stage. — YAP CHEE HONG/The Star

Of all blood cancers, leukaemia and lymphoma are among the most curable.

However, many people, including doctors, still believe the disease leads to immediate death.

“This is no longer true today as they are not fatal.

“With optimal treatment, the majority of patients go into remission and are considered cured.

“These two cancers have been more extensively studied than other forms of cancer, due to the ease in obtaining samples from blood, bone marrow or lymph nodes, spurring the advent of novel targeted therapies for a cure,” says consultant haematologist Dr Ng Soo Chin.

Most blood cancers start in the bone marrow, where blood is produced.

In most blood cancers, normal cell development is interrupted by the uncontrolled growth of an abnormal type of a particular blood cell.

These abnormal blood cells, which are cancerous, prevent your blood from performing many of its functions, like fighting off infections or preventing serious bleeding.

The presentation between acute and chronic leukaemia differs.

“The acute person will tell you he was well a week ago and is now down with symptoms such as lethargy, anaemia and recurrent infection.

“Suddenly, he may look pale, so we check his blood count for any abnormalities. A bone marrow exam will further confirm whether it is acute.

“With chronic leukaemia, the patient can be unwell for a couple of months.

“We are increasingly picking up cases early because of blood test availability.

“The survival rate has improved tremendously for acute leukaemia, with more than 50% fully cured because bone marrow transplants are easily available in the country.

Generally, chronic leukaemia patients belong to the older age group (50 years and above), but acute leukaemia can occur in all ages.

Leukaemia symptoms are often vague and not specific, so it’s easy to overlook them as they may resemble symptoms of the flu and other common illnesses.

In fact, chronic leukaemia may initially produce no symptoms and can go unnoticed or undiagnosed for years.

Lymphomas, a type of blood cancer that begins in a subset of white blood cells called lymphocytes, can be classified into Hodgkin’s and non-Hodgkin’s.

The main difference between Hodgkin’s and non-Hodgkin’s lymphoma is the specific lymphocyte each involves.

Lymphocytes are an integral part of your immune system, which protects you from germs.

You can beat the disease even if it is detected at a late stage.

Multiple myeloma, which is the third kind of blood cancer, forms in a type of white blood cell called a plasma cell.

Patients often complain of bone pain, and unfortunately, this type of cancer has no cure. Blood cancers typically involve abnormal white blood cells and can affect paople of all ages, depending on the type of cancer. — 123rf.com

Chemotherapy is a much dreaded word among cancer patients.

But with advances in medicine, newer chemotherapy-free treatments are now available.

Dr Ng says, “Traditionally, cancer is treated via surgery or radiation – the layman says we ‘fry’ and ‘poison’ them, which is not far from the truth!

“Radiation means burning the cancerous area, but a lot of times, the cancer can also be present elsewhere, so there is limitation to this treatment.

“With chemotherapy, we use cytotoxic (cell-killing) drugs – they go in and knock off both cancer and normal cells.

“But as doctors, we are looking at a different perspective. We are more worried about white cells dropping (neutropenia) because the patient can pick up an infection that can potentially kill him.”

Neutropenia is a condition that results when the body does not have enough neutrophils, a type of white blood cell that is an essential first line of defence against infections.

“That’s one risk of chemotherapy, although we can now improve neutropenia by giving a growth factor injection.

“But for certain cancers, we need to step up the drugs.”

He adds: “We are scared of neutropenia, but patients are more concerned about bodily changes.

“The older ones get upset over losing hair because they cannot take it when others ask them what has happened to their hair.

“Young people are not as concerned with hair loss because it can be trendy.

“We understand that chemotherapy is less than pleasant and strong doses can impair fertility in young patients, especially women.

“Despite current technology, only one-third of patients are successful in freezing their eggs.”

What he is concerned about is that chemotherapy can actually increase the patient’s risk of getting another cancer, especially blood cancer.

Dr Ng says: “Most experts believe chemotherapy damages stem cells, so if you’re unlucky, you might get acute myeloid leukaemia after undergoing chemotherapy for breast cancer.

“It’s just like crossing the road – there is always a risk of being knocked down.

“All our cells have a biological clock and there is an orderly exchange of old and new cells.

“But with blood cancers such as leukaemia, there is a clone of abnormal cells.

“Cancer cells have an advantage over normal cells because they can survive longer.”

Chemotherapy is still needed to treat most acute blood cancers, although if the mutation is known, targeted therapies can be applied.

For chronic blood cancers, there is no need for chemotherapy. Oral drugs are enough to combat the disease.

Eventually, many patients are able to wean off the drugs.

As we may be aware, immunotherapy is the buzzword in cancer treatment today.

Also called biologic therapy, it is a type of cancer treatment that boosts the body’s natural defences to fight cancer.

It uses substances made by the body or in a laboratory to improve or restore immune system function.

One of the latest treatment modalities is the CAR T-cell therapy, a form of immunotherapy that uses specially altered T cells – a part of the immune system – to fight cancer.

A sample of a patient’s T cells are collected from the blood, then modified to produce special structures called chimeric antigen receptors (CARs) on their surface.

When these CAR T-cells are reinfused into the patient, the new receptors enable them to latch onto a specific antigen on the patient’s tumour cells and kill the cells.

“At the moment, this intravenous therapy is available in the United States and hasn’t reached our shores yet. It has to be properly regulated first,” says Dr Ng. 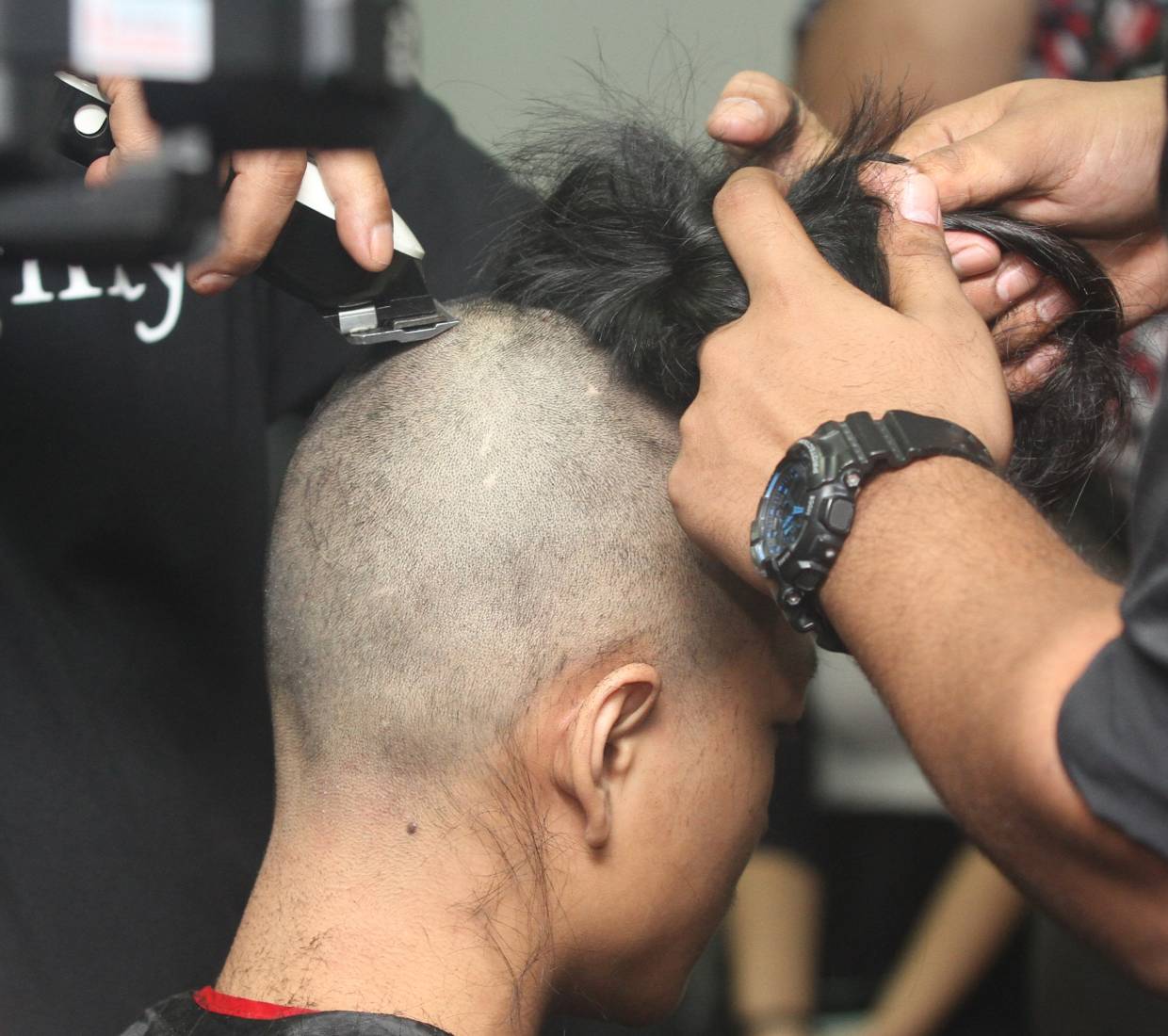 A volunteer is having his head shaved to donate hair to make wigs for cancer patients in this filepic. Hair loss is one of the side effects of chemotherapy that affect patients the most.

The consultant haematologist errs on the side of caution when patients ask about natural cancer remedies, or the do’s and don’ts during treatment.

“We always believe there should be a scientific approach to the problem.

“If patients are doing okay while undergoing treatment and there is no weight loss, I tell them to go ahead and do what they always do.

“However, just be particular about food hygiene, as there is a chance you may get food poisoning.

“If you’re undergoing chemotherapy, then you’ll land yourself in hospital, and if your luck is bad, you may even land up in the ICU (intensive care unit).

“So make sure the food is cooked and not left overnight to reduce your chances of infection.

“Eat a balanced diet,” he advises.

When it comes to exercise, he says to work out within your limit.

Instead of pushing the body and running marathons or climbing mountains, go for walks.

Dr Ng says, “Life should go on, but be sensible.

“Don’t go to crowded places because you may pick up an infection, but don’t be withdrawn either. All humans need social interaction.”

With the billion-dollar dietary supplements industry, companies are constantly trying to lure customers into buying their products.

“A lot of supplements are just glorified vitamins in different packaging.

“The more expensive they are, the more people will buy them, thinking they are good.

“There are people with good intentions, but unfortunately, there are also a lot of scammers out there – that is life.

“For the amount you spend on supplements, why not keep the money aside and go for a trip once your treatment is over?” he suggests.

Often, the late diagnosis is due to preference for alternative treatment.

“These alternative treatments are like fashion shows, after some time, they go out of trend.

“For me, you’re wasting valuable time because cancer is not your friend.

“Yes, chemotherapy is tough, but with the latest chemo-free regimen, patients are more willing to come forward.

“The earlier it is treated, the higher your chances of recovering,” he says.

To share his 30-odd years of knowledge and experience in the field, Dr Ng has written his third book titled Understanding Blood Disorders.

Intended for patients, caregivers and healthcare professionals, proceeds from the sales of the 270-page book will go to the newly set-up Faith Hope Love Hospice Care Malaysia in Petaling Jaya, Selangor.