Surgeons have progressed from using scalpels to minimally-invasive endoscopy, as seen in this filepic, to non-invasive methods like the Gamma Knife.

In the last decade, we have seen minimally invasive endoscopic surgery making headway in the treatment of head and neck tumours.

However, like the scalpel blade, surgical telescopes have their limitations.

Multiple small tumours with central locations are difficult to access due to the risk of destroying surrounding structures while making a pathway to approach them.

So, how do we gain access to such tumours?

Therapeutic radiological inventions like Gamma Knife are the answer.

It was then handed over to the University of California, Los Angeles, United States, in 1979 for clinical trials.

The term “knife” is a misnomer.

The procedure is compared to surgery because it produces similar results, which is to get rid of or destroy a tumour.

A study of 290 patients post-Gamma Knife treatment published by the American Journal of Clinical Oncology in 2016 revealed that approximately 87.7% and 87.2% had no tumour progression over a 10- and 20-year period of follow-up respectively.

According to Universiti Kebangsaan Malaysia Medical Centre (UKMMC) consultant brain surgeon Associate Professor Dr Ramesh Kumar, many refer to Gamma Knife as the “miracle knife” as it provides a single, high-dose radiation with pinpoint accuracy and precision to a critical area of the brain. It is often used to address small tumours of the brain with minimal effect to surrounding tissues.

More than 23,500 patients have been treated with Gamma Knife worldwide up to the year 2014.

In Asia, Japan leads with 53 Gamma Knife machines, a ratio of one machine to 2.4 million of its population.

For Malaysia to meet that ratio, we will require 13 Gamma Knife machines nationwide, with an average of one per state. 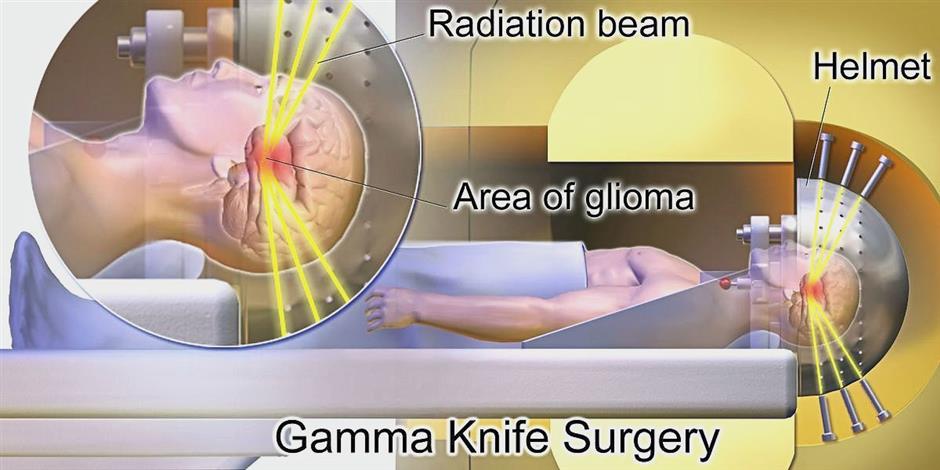 The Gamma Knife machine consists of a shielded gantry containing cobalt-60 sources arranged in a half circle that shine gamma radiation to the target point in the brain. — Wikimedia Commons

Stereotactic radiosurgery allows for calculated doses of gradient concentrations of ionising radiation to the tumour with minimal effect to the surrounding tissue.

Multiple brain tumours may occur due to spread of cancer from other parts of the body, a process termed metastasis.

A study carried out in Sarawak in 2014, and published in the Malaysian Journal of Medicine, showed that brain metastasis from other parts of the body are not only a rising in trend in our population, but also doubled in the four years of the study.

UKMMC consultant brain surgeon and Neurosurgical Unit head Assoc Prof Dr Azizi Abdul Bakar shares that the Gamma Knife can also be used in addition to brain surgery, when the tumour is unable to be completely removed due to its close proximity to other vital structures such as major blood vessels and nerves in the brain.

The Gamma Knife machine consists of a shielded gantry containing cobalt-60 sources arranged in a half circle that shine gamma radiation to the target point in the brain.

Assoc Prof Ramesh likens it to concentrating sunlight with a magnifying glass.

With the Gamma Knife, the cobalt-60 sources act as sunlight and the head protector acts as a magnifying glass to concentrate the light beams onto a small surface area.

Prof Fuad says, “Firstly, a head-frame or custom-made face mask based on the curvature of the individual’s head and face is used to lock the patient’s head in place.

“Then, the patient will have to undergo conventional imaging with CT and MRI, to map out the coordinates of the tumour in the brain.

“Thirdly, the patient will be placed at the Gamma Knife machine and targeted gamma rays will be shined upon the marked target.”

The face mask or frame is a system to hold the head steady, preventing any unwanted movement that may alter the calibrated direction of the gamma rays to the target.

The process, however, has a multitude of steps involving a multidisciplinary team of brain surgeons (neurosurgeons), cancer physicians (oncologists), imaging doctors (radiologists) and a physics expert (physicist).

Initial CT/MRI findings and the feasibility of the Gamma Knife procedure will have to be evaluated and discussed among the brain surgeons, cancer physicians and imaging doctors.

Computer planning of gamma rays will be performed by the oncologist, neurosurgeon and physicist.

Occasionally, an anaesthetist consult will be required for sedation.

According to Prof Fuad, the Gamma Knife is effective on brain tumours that originate from nerves (neuromas), the pituitary gland (pituitary adenomas), coverings of the brain (meningiomas) and brain tissues (gliomas).

It has also been shown to be effective in treating abnormal blood vessels in the brain and spinal cord, such as arteriovenous malformations (inborn abnormalities of the small vessels of the brain).

Its use is also being explored for functional disorders of the brain such as chronic facial pain caused by the trigeminal nerve (trigeminal neuralgia), epilepsy, depression and obsessive compulsive disorder (OCD).

The use of Gamma Knife in functional disorders is still in its infancy and not widely accepted.

Studies have also highlighted its use in acoustic neuroma, a non-cancerous tumour that originates from the hearing and balance nerves in the brain.

“Stereotactic radiotherapy such as Gamma Knife has a role in acoustic neuromas that are very small and less than 2cm in diameter. It is an option for non-surgical candidates, offering similar tumour control rates,” says UKMMC senior consultant Ear, Nose and Throat surgeon and Otorhinolaryngo-logy - Head and Neck Surgery Department head Prof Dr Asma Abdullah.

She adds that the Gamma Knife has been used in Malaysia in selected cases with good outcomes, though it is still a relatively new technology to us. 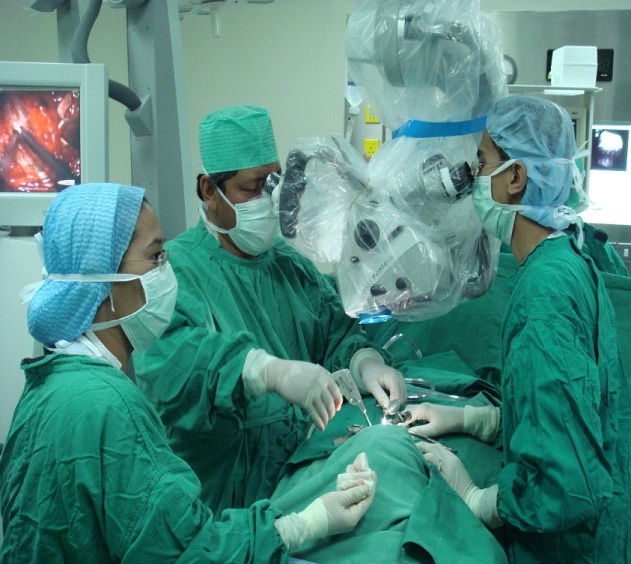 Surgeons have progressed from using scalpels to minimally-invasive endoscopy, as seen in this filepic, to non-invasive methods like the Gamma Knife.

Gamma Knife treatment is often a day-care procedure whereby patients visit the centre to receive their treatment and are allowed home by the end of the day.

According to Dr Sonia Manocha, “My late father had Gamma Knife treatment and it was painless, which made it bearable.”

Assoc Prof Ramesh adds, “The Gamma Knife can be used to treat multiple lesions and most patients only require a single treatment.”

Unlike conventional radiotherapy which limits whole grain radiation to once a lifetime, Gamma Knife treatment can be repeatedly if required.

Patients generally have a shorter recovery time and each procedure should take between 20 minutes to three hours depending on the complexity of the case.

Following treatment, the patient will be allowed to return home within the same day and resume their normal activities.

It has less side effects compared to conventional radiotherapy as the gamma rays are concentrated on the targeted tumour, thus resulting in less damage to structures on its approach during shining.

This also enables more patients to be treated in a day.

The Gamma Knife treatment does have its downside.

Firstly, it is an expensive technology and cost of treatment will be higher compared to conventional radiotherapy.

The counter argument is that most Gamma Knife patients only require one treatment, while conventional radiotherapy requires multiple courses of treatment depending on the nature of the disease.

According to UKM Faculty of Medicine dean Prof Dr Zaleha Abdullah Mahdy, UKMMC will be the first government-based healthcare agency to equip itself with the Gamma Knife.

The Gamma Knife treatment centre at the university hospital was launched by Health Minister Datuk Seri Dr S. Subramaniam in February and is due to be completed soon.