India may be the country with the most malnourished number of people in the world, yet obesity is fast becoming a big problem too.

Reach out for a menu card at an urban eatery and you’re likely to be inundated with a welter of healthy cuisine options: low-fat, low-salt, high-fiber, low-sodium, diabetic, non-diabetic etc. 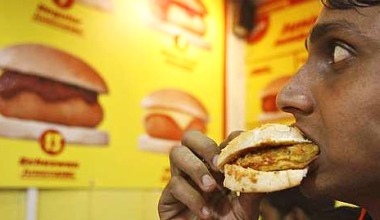 Urban Indians, caught in thewhirligig of crazy work schedulesand the pressures of an urbanmodern life, exercise very little butlove to eat out a lot. — AFP PHOTO

Nirula’s, one of the country’s oldest indigenous fast food chains, has recently introduced its Nutribyte burgers crafted from whole wheat flour, more veggies and leaner cuts of meat. There are even frozen desserts (Boilite) sans cream and excessive sugar for calorie crunchers.

“The response to our new healthier offerings,” says a Nirula’s official, “has been excellent and we look forward to taking this forward.”

To stay abreast of competition, global pizza chain Dominos too has unleashed its Sicilian Wheat Treat range of pizzas across a swathe of Indian cities. These pizzas use whole wheat instead of refined flour and the pizza maker, which launched this version in the market in April this year, has spent Rs40mil (RM2,857,600) in promoting it this fiscal year.

The competition is intense, say market experts, because the fast food chains see their newly launched healthy food range as a future growth segment. And it’s about time too.

Urban India — fed on years of unhealthy, rich fare — is paying a heavy price for that unmindful gluttony. It is afflicted by a raft of lifestyle ailments — stress, diabetes, hypertension, coronary artery disease (CAD).

In fact, according to WHO’s Diet, Nutrition and Prevention of Chronic Diseases Report, India ranks among the world’s top 10 obese nations with a whopping 150 million urbanites (out of a total population of a billion plus) qualifying as “seriously obese” (Body Mass Index or BMI of over 30).

The report adds that 2.4 million Indians die of CAD each year while 60% of the world’s cardiac patients will be Indians by 2010! Coronary Heart Disease (CHD) deaths too will double the current number in India by 2025.

Dr Mittal emphasises that what is worse is that urban Indians, caught in the whirligig of crazy work schedules and the pressures of an urban modern life, exercise very little but love to eat out a lot.

This fact is supported by the Hotels and Restaurants Association of India (HRAI) data, which states that urban Indians are now tucking in at restaurants almost thrice weekly. And this, predicts HRAI, will scale up to four-five times per week by 2015. More disposable income, peripatetic lifestyles and changing work patterns have all fuelled this phenomenon.

While such a trend is far from a healthy phenomenon, it has been a major growth driver for India’s food and beverage industry which is now a US$60bill (around RM210bil) behemoth, galloping at 25% per annum.

“With a burgeoning population and more and more Indians dining out, eating healthy has become a necessity rather than a mere fashion statement,” says New Delhi-based food consultant Manav Sharma who runs a slew of popular eateries in India’s capital city.

That’s why Sharma emphasises that in all his restaurants, he follows a few cardinal cooking rules.

“We always steam, sauté or grill our food items rather than deep-fry them. Also, we use olive oil, fresh herbs and vegetables to offer food that retains its taste and nutritional content.”

Surprisingly, even Indian cuisine — traditionally a calorie-cruncher’s nightmare with its intense gravies, creamy dals (lentils) and ghee-anointed breads — is going on a health diet.

The Lalit Grand Intercontinental New Delhi’s assistant food and beverage manager Neelabh Chugh opines that this awakening augurs well for both the diners and the dining establishments.

“We have calibrated our Indian dishes to contemporary tastes by excluding ghee and introducing fresher and healthier recipes. This has attracted more and more people to the Indian fine dining experience we offer.”

In the meantime, Radisson MBD Hotel Noida has taken the concept of healthy cuisine to a new high by launching “Wellness Packages” that offer healthy food and spa treatments factoring in a guest’s health profile.

“In the kitchen too,” he adds, “we have discontinued the use of any product over the permissible limits of trans fat (vanaspati, margarine etc). Also, a very concentrated effort is on to reduce the oil content in all Indian foods including kebabs so that guests have no cause for worry.”

Even the hotel’s boulangerie (The Chocolate Box), points out Variyath, has launched a smorgasbord of “healthful” breads. Made from soya, wholewheat, ragi, sourdough, pumpernickel, seven cereal, multigrain, garlic, rosemary and poppy seeds, the breads do a double whammy in terms of taste and health, addressing specific health problems like high blood cholesterol, cardiac ailments and diabetes.

However, Indian chefs admit that while it’s relatively easier to control fats in Western cuisine, rustling up low-cal, low-fat Indian food is a challenge. Nevertheless, there are brave attempts from hotels like The Park, with its immensely popular Indian restaurant Fire, through fat-controlled fare.

The eatery’s interpretation of Indian food —authentic but with a contemporary twist — has helped keep preparations distinctly traditional (and authentic) while presenting them in a modern, minimalist way.

The dishes taste light, fresh and homey, quite unlike the traditional artery-clogging cuisine served up in many restaurants. Hence, you may dig in with fervour (but sans fear) into such mouth-watering delights as Roast Duck Mussallam and Haleem Organic Vegetables.

Says The Park’s executive sous chef Aditya Jaimini, “We’re always reinventing our menu to incorporate healthy and tasty food. For instance, our organic section for which we source organic foodstuff like dals, chickpeas, rice, vegetables and fruits from far-flung organic farms, has won us rave reviews. We also emphasise the use of minimal fat and sautéing and stir-frying ingredients rather than deep-frying them.”

In other words, Indian dining establishments have at last realised that there is an inherent connection between their own bottomline and their customers’ waistline!