Food is in his blood – but he cooks for pleasure

Ethan Wong grew up being surrounded by food, but is reluctant to open a restaurant.

Standing guard over a hot wok, Ethan Wong’s face is focused and determined. His little niece wanders in to regale him with a charming little sob story about her burst balloon, but even her childish prattling does little to break his concentration.

He stirs and stirs as though his very life depends upon it and only looks up to break into a small smile when the rice has reached the consistency he wants it to be.

“This is what it’s supposed to look like,” he says, as he ladles a heap of golden fried rice on a plate, satisfaction etched all over his face.

Wong’s fascination with food is hardly surprising, coming from a family of chefs: his father, brother, four uncles and three aunts are chefs.

He grew up in the bosom of his parents’ famed Keong Kee restaurant in Kuala Lumpur, which started as a stall in 1982 before he was even born. It grew into a popular restaurant, serving up all sorts of noodles, including its famed sang har meen. His father was the chef and Wong looked to him as a sort of food hero.

He too seemed destined for the kitchen when he enrolled in a culinary arts diploma programme. But he never got to finish it, as his mother was diagnosed with cancer and Wong had to help out in the family business.

He ended up staying for seven years, working mostly at the front of house, although he did spend two years cooking in the kitchen and learning all his father’s recipes.

“Basically, everything that we put on the menu, I know how to make. I learnt all of it, but I think my dad would probably say my mastery of the dishes is only around 80%,” he says, laughing. 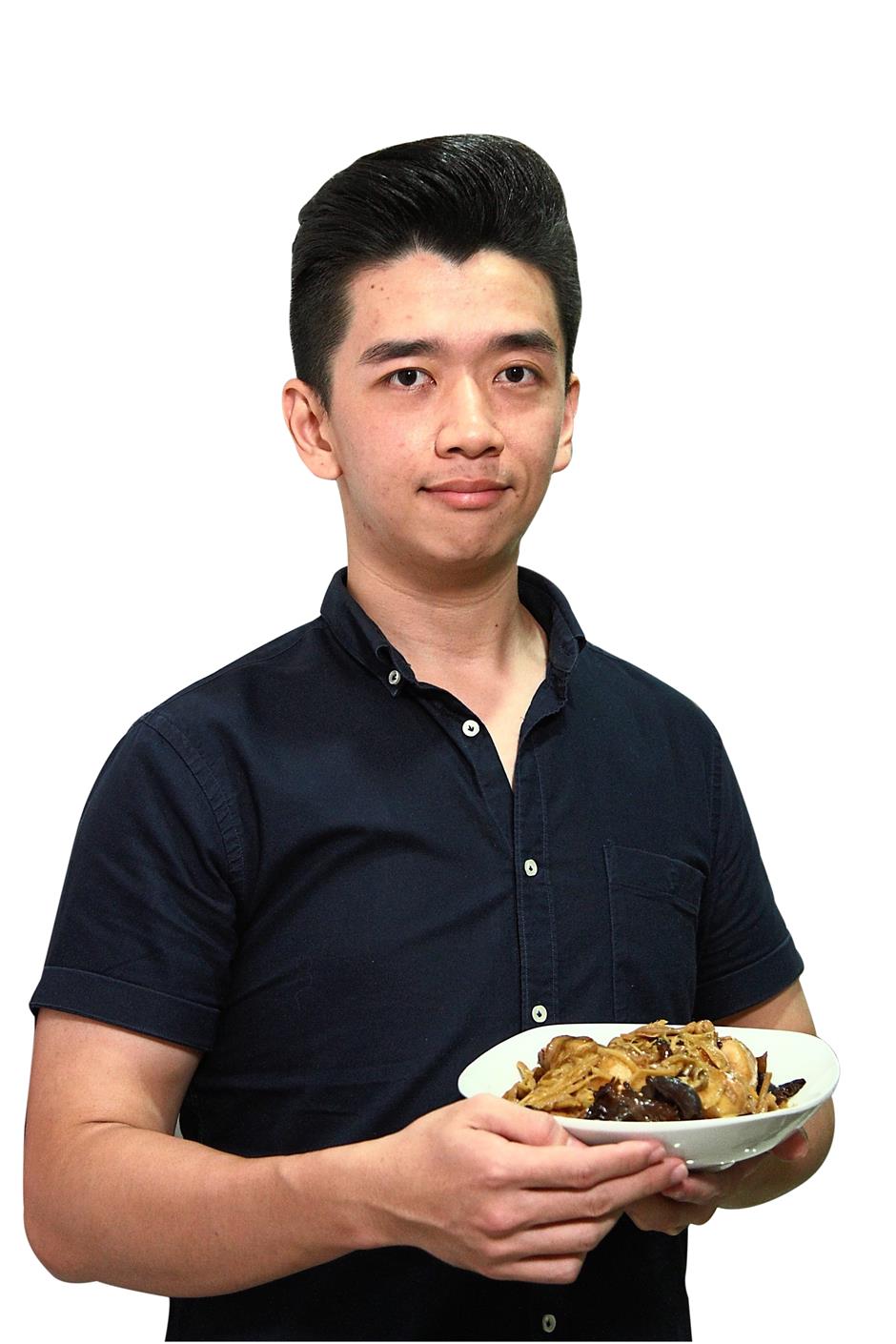 Ethan Wong grew up being surrounded by food, but is reluctant to open a restaurant.

After the restaurant closed in 2014 following his mother’s death, Wong served as a consultant for a Malaysian restaurant based in Guangzhou and was the production head and chef at Healthy Holics, a healthy food delivery business.

Last December, he started writing recipes, culinary tips and tricks, and food reviews on his website www.3thanwong.com. He has now expanded into recipe videos, and says that’s what he wants to do more of.

“I wanted to curate recipe videos that are simple enough for people to follow. I have made eight videos so far and I’ve really enjoyed the experience. My next goal is to inject humour into each video,” he says.

Although Wong is a proficient cook, his heart and skills are centred on Chinese cuisine. His steamed chicken with lily buds and black fungus, for example, is a Keong Kee recipe that he has perfected.

“This was a Keong Kee bestseller inspired by my mother, who was from the Shunde region in China. This Shunde dish is really nutritious and healthy,” he says.

Then there is his golden fried rice. “I think many people are not aware of this version of fried rice. Normally with fried rice, you cook the eggs first and break them up into smaller pieces. So when you fry the eggs and rice, they are two separate entities. In this version, the egg yolks coat every grain of rice, turning them golden, which is why in China, they call this dish golden fried rice,” he says. 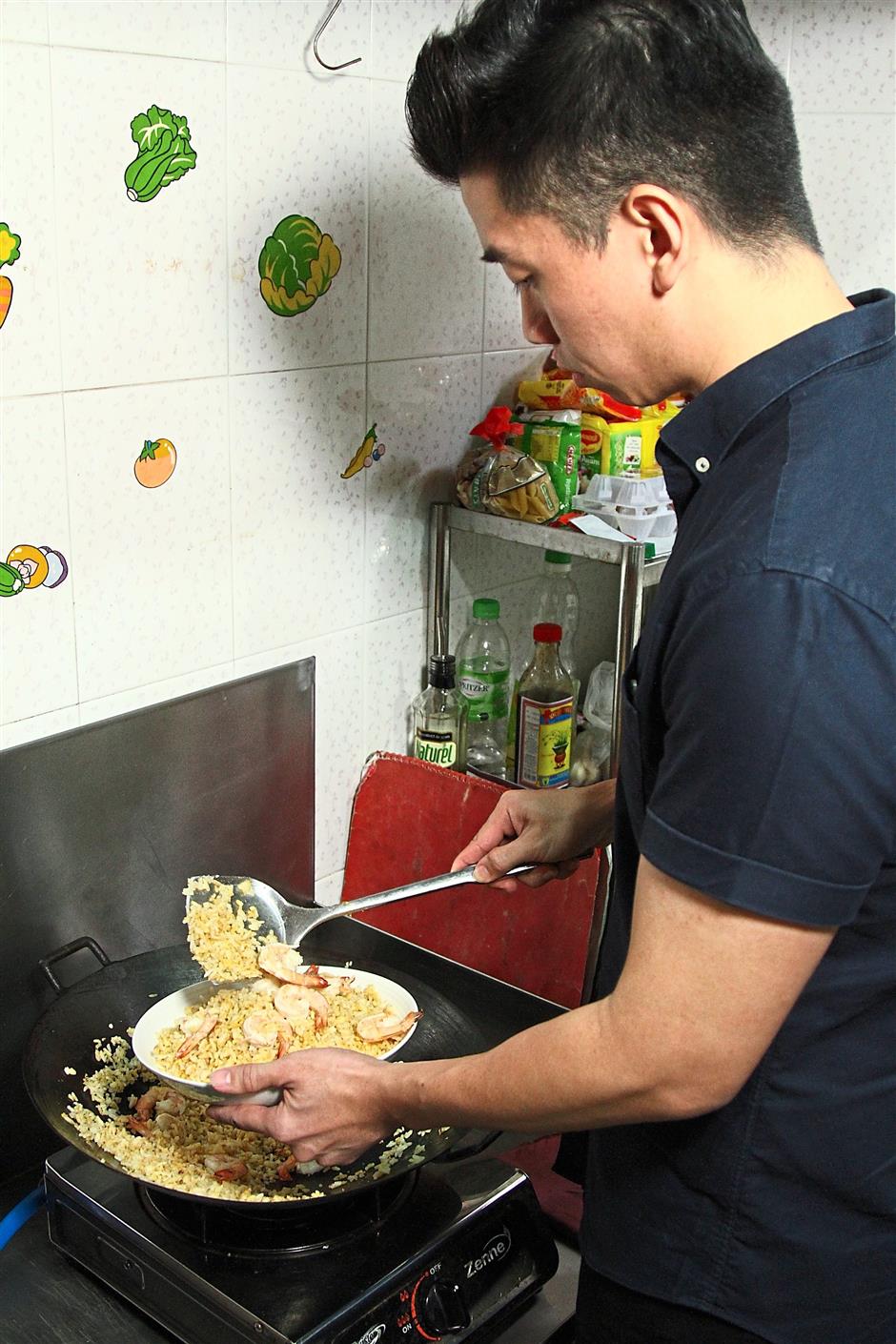 Wong is very, very focused in the kitchen and doesn't even look up until he has cooked a dish to his own exacting specifications.

Wong finds inspiration in dishes that his late mother used to whip up, like her ginkgo barley with yuba, which he says is slightly different from classic versions, as he uses dissolvable yuba (fucuk), which is a lot more expensive but yields a creamier, richer flavour.

During his time at Healthy Holics, Wong often had to come up with original healthy dishes to serve to customers. He found inspiration from the Internet and did a lot of experimentation, before coming up with inventive dishes like his own modern yee sang, which replaces the traditional plum sauce with a zesty lemon dressing and eschews pork crackling for roasted nuts.

Although Wong confesses that he has learnt lots of important cooking skills from his dad – especially knife skills and how to cook Chinese food at the correct temperature – he is reluctant to follow in his father’s footsteps.

He still gets calls from old customers asking him to open his own restaurant. One offered to pay him RM5,000 to cook a meal for a group of people, but Wong says he doesn’t want to go down this route.

“When you work in a restaurant, you’re up at 6am and work until 10pm – you barely get any sleep. Now I have more time to myself and I enjoy making cooking videos. When people send me messages saying they liked it – I love that. I am trying to inspire people out there to cook – hopefully that works,” he says. 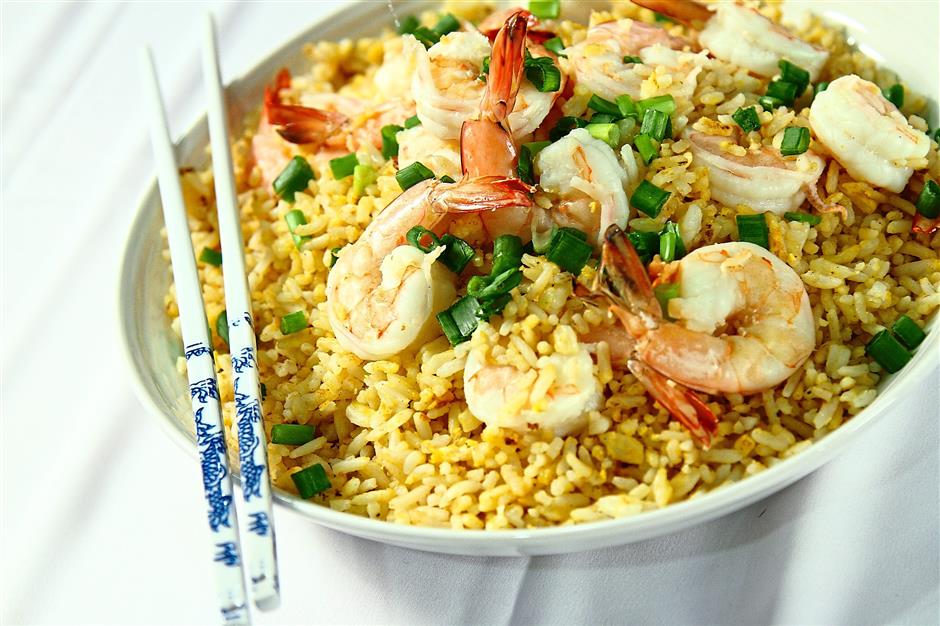 For the fried rice

Peel prawns, keeping the tails. Bring water to boil. Add salt and oil into the water; poach shrimp for 10 seconds. Strain and set aside.

Make sure your wok is dry before cooking. Dip paper towel into cooking oil and grease wok with oil. Heat it up to smoking point and turn off the fire.

Pre-heat 1 tablespoon chilled cooking oil in the wok – this ensures the rice doesn’t stick to the wok. Increase the heat to medium and add garlic. Fry garlic until it is golden. Switch off the heat, add rice and season with salt and white pepper.

Turn heat up to high and thoroughly stir-fry the rice. Add egg yolks and stir-fry, mixing the rice with the yolks. Make sure all the rice is separated into individual grains – break up any lumps of rice with your spatula. Season with more salt if required.

Continue stir-frying until you see each grain of rice jumping around and smoke rises. Add in the poached shrimp. Stir-fry well for another minute. 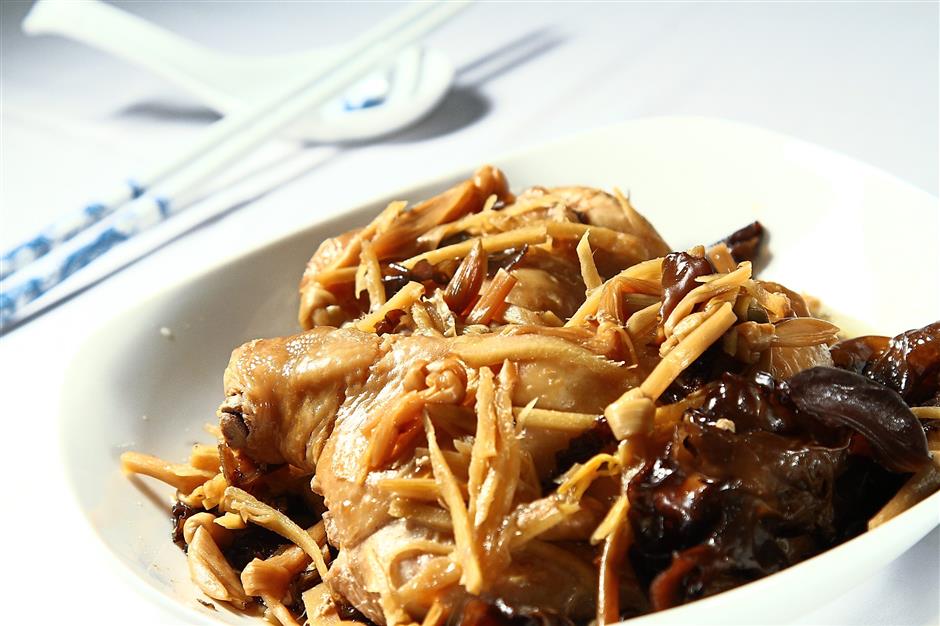 Soak the dried lily buds in several changes of water until fully softened, about 30 minutes. Strain and squeeze dry.

In a bowl, combine the chicken, lily buds, black fungus and ginger. Add oyster sauce, fish sauce, soy sauce and thick soy sauce. Mix well (use your hands for best results). Cover and set aside in the fridge for 30 minutes or more.

Bring steamer to a full boil. Add flour to the chicken mixture and mix well. Place chicken, lily buds and black fungus in a steaming bowl/plate in three different heaps. Steam for 15 to 20 minutes, and remove from steamer once done. 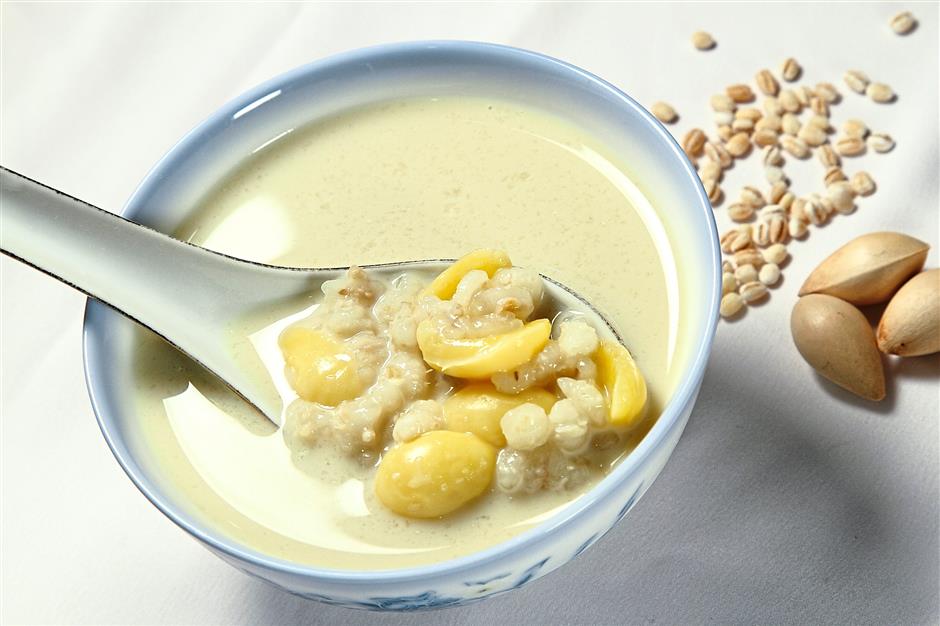 1 pandan leaf, tie into a knot

Place a large pot of water on high heat. Put barley, ginkgo, yuba and pandan leaf into the pot. Once it reaches boiling point, lower heat to medium-low and simmer for 2 hours. Add sugar to taste and turn off heat. Serve hot or chilled: Ladle the mixture into a bowl. Add evaporated milk – one-tenth of the dessert amount. 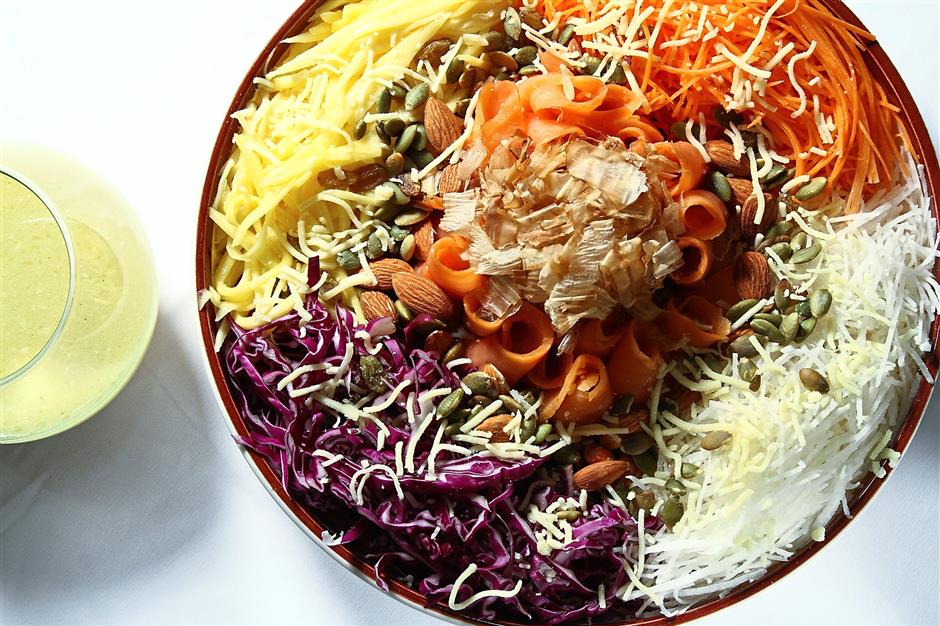 Modern yee sang with a twist

YEE SANG WITH A TWIST

For the dressing, blend everything together until smooth, seasoning to taste with the salt and pepper.

In a big round plate, pile the red cabbage, carrot, yambean and mango in separate heaps around the plate. Lightly sprinkle with cheese. Top with almonds, pumpkin seeds, dried blackcurrants and raisins.

Gently place rolled smoked salmon in the centre, leaving a small gap in the inner centre. Place bonito flakes in this spot.

Drizzle with dressing when you are going to toss the yee sang. Enjoy.

Food is in his blood – but he cooks for pleasure