Where do old clothes go?

New year, new garb. But what happens to the old ones which you’ve dutifully dropped into the recycling bin?

SOMEWHERE in Kenya, there could be a girl heading for work wearing that red Zara blouse which you got for yourself two Chinese New Years ago. And one guy could be wearing that pair of Levi’s which could no longer accommodate your husband’s growing girth. Yes, all your unwanted attire, plus the worn-out Nike, stained bedsheet, outmoded belt and pre-loved handbag which you have dutifully dropped into the recycling bin, could well end up in someone’s closet in some remote part of the world.

But first, they might have piled up at the Brackwell Malaysia factory in Port Klang, Selangor. This company is in the business of recycling used apparel and household textiles. Every day, huge amounts of used clothes are discarded in Malaysia and some of these would certainly end up in a recycling facility such as Brackwell’s, located in the Bandar Sultan Suleiman industrial area.

At the factory, bundles of old clothes and textiles are stacked one atop another, forming mounds that reach almost to the ceiling. The facility sprawls over 5,400sqm (60,000sq ft) yet there is barely room to walk in as amidst the huge bundles are metal containers with more stuff – everything from dresses to children’s t-shirts, shirts, blouses, shorts, coats, sweaters, jeans, baseball caps, bedsheets, curtains, shoes, handbags, belts and soft toys. Old apparel are cut up and turned into industrial cleaning cloths.

It sure resembles a graveyard for humanity’s discards and excesses. But this is hardly the place where old clothes go to die. Rather, this is where they get a second lease on life. The used clothing and textiles are resold, turned into industrial cleaning cloths or processed for fibre. Every day, some 25 tonnes of the reusable waste arrive at the Brackwell factory, says managing director Chris Hughes. They originate mostly from Australian charities, and smaller amounts come from local donations, Japan and the United States.

Hughes, who used to work with The Salvation Army charity in Australia where he was responsible for selling off donated apparel, explained the recycling process as we picked our way through the many containers of clothes.

The first step is segregation as the bundles contain an assortment of stuff. Aside from clothing, things like shoes, belts, soft toys, handbags and backpacks get mixed in as well. Workers first fish out these items as well as the heavy ones such as sweaters, coats, woollens, flannel, and household textiles which include bedsheets, blankets, comforters, pillow covers, curtains and table linens.

Then, the damaged items are separated from the wearable and usable ones. In the next stage, the latter goods are further separated by types and quality grades. Ladies t-shirts, ladies cotton blouses, ladies silk blouses, surf shorts, beachwear, baseball caps, denim and boys polo t-shirts are just several of the 120 categories of products they have. The trained workers are adept at their tasks. One quick look and they know which box to toss the item into.

This is clearly a labour-intensive industry, which was why Brackwell, which has been operating in Australia for over 20 years, started an office in Malaysia in 2007, taking advantage of the good infrastructure and affordable labour cost. It currently employs 120 workers. “The cost is too high to run such a business in the West as it is labour-intensive, so many companies are moving to eastern countries,” explains Hughes.

The usable garments, accessories and household textiles are sold as second-hand goods within the factory compound and in its three Bagus Bundle stores. (In Malaysia and Indonesia, the word “bundle” is increasingly being used to identify second-hand apparel stores, chiefly because the goods arrived in bundles.) These shoes might look worn out but there’s still a market for them in poor parts of the world.

The bulk of the usable items is exported to Africa (some 300 tonnes a month) and to parts of the world where new clothing is not affordable for many, such as in India, Pakistan and the Pacific Islands. “It’s meeting a genuine need and there is huge demand in Africa which is the world’s biggest market for used clothing,” says Hughes.

Locally, there is also no shortage of demand for such apparel. The factory sees a constant stream of buyers. Some of the things looked worn out but there must be some good finds, judging from the many people rummaging through the heaps. One elderly man held tightly to a child’s quilt. Several men were rifling through the pile of old jeans. One guy was grinning widely and I soon saw why – he had unearthed a Chanel and an LV bag. They were most likely fakes but nevertheless, still in good condition.


For a good wipe

Of course, not all the donated textiles can be resold. Those which are damaged, stained and suitable as cleaning cloths, are recycled into industrial rags. In one section of the factory, workers deftly cut away parts with elastic bands, zippers, buttons, sequins, beads and stitched logos, and then the rest of the garment into fairly large pieces. The pieces of cleaning cloths are then passed through a metal detector before being packed in 10kg bundles and shipped out. “The automotive industry uses a lot of wiping cloths and any metals or even stitched logos might cause scratches,” explains Hughes.

The offcuts are not discarded but recycled. Together with other rejects such as unsold bras, these scraps are sent to a company in Ipoh, ResourceCo Asia, which mixes them with other materials to produce engineered fuel for cement kilns.

Winter clothing such as knitwear, acrylic sweaters, woollens and coats, which generally have poor demand here and in Africa, are sent to India where they are shredded to extract fibres for use in making things like blankets and carpet underlay. Soft toys that cannot be resold are sent to another local recycler, which processes the stuffing into flocks (small fibre particles used to create velour or non-slip surfaces) or as fillers for comforters and cushions.

As for shoes, workers first have to find a matching pair. Then, they are graded according to quality. Highly damaged shoes go to landfills. They cannot be turned into engineered fuel as burning rubber and plastics releases toxic fumes. There will always be buyers for denims, even if they’ve been used.

“About 60% of what arrives at the factory are wearable items, and some 40% are recycled. It’s not possible to recycle everything, so we do have some waste but we try to keep that to below 2%,” says Hughes.

Items that get thrown away include things which are badly damaged or contaminated with oil, cannot be sold, and which are just not economically viable to be recycled, such as handbags and shoes. Handbags are notoriously difficult to recycle because they are made of a combination of materials which are difficult to separate. Often, there are plastic or leather, metal or plastic zippers, metal studs and rings, and fabric linings. Hughes says ResourceCo did a test and found it not viable to recycle handbags. “You need a high amount of energy to burn it. So the amount of energy needed to recycle is more than the returns.”

Nevertheless, things which someone considers as spoilt might not be so in the eyes of another. So, there will be takers even for the poorer grade items. “A percentage of the population in Pakistan, mainly in the rural areas, do not mind lower quality items,” says Hughes.

“We even send them single shoes. Someone working in a farm will not care if his shoes are mismatched. We send about 100 tonnes of mixed items there a month and 15% to 20% of that are single shoes and third-grade handbags.” He says exporting such goods not only divert them from landfills but also gives the poor an option.

Last month, Brackwell handled 600 tonnes of old clothing, accessories and textiles, of which 104 tonnes had been collected here and the rest, from Australia. It’s main local source are the 200 collection bins put up by another recycler, Life Line Clothing. There are plans to increase the number of bins, now mainly found in the Klang Valley, with a few in Bentong (Pahang) and Teluk Intan (Perak). Under the collaboration, Brackwell pays for the donated stuff by weight, and for every kilogramme collected, a certain sum (undisclosed) is given to three charities – the Malaysian Association for the Blind, Spastic Children’s Association of Selangor and Federal Territory, and the National Cancer Council.

So, has he personally discovered anything useful in the waste piles so far? He grinned and pointed to his Polo blue shirt and Levi’s 501. And what has been his most valuable find? “It was back in Australia. A Victorian-era dress, almost 200 years old, in good condition. We had an auction, and got A$7,500 for it,” he shares.

Well, as they say, one man’s trash is another man’s treasure.

Related story:
Old clothes can be renewed into something useful 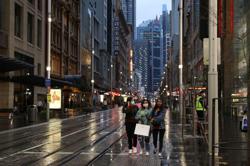