An artist impression of the Passive Eco Pods at the proposed Lexis Resort in Port Dickson. The self-sustaining carbon zero pods are modular in nature and seek to reduce the impact of the natural environment.-pix courtesy of KL Metro.

As cities increase in density both horizontally and vertically, eco architect Jason Pomeroy is making waves in greening urban habitats.

This year’s World Architecture Festival (WAF) in Singapore was meaningful to Prof Jason Pomeroy for a couple of reasons.

For one, he was selected for the first time as a super jury member for the festival’s awards programme, joining the ranks of globally accomplished architects and designers like Richard Rogers and Peter Cook.

At 40, he was also arguably the youngest super jury member in the team.

“To be part and parcel of this calibre is most enlightening and encouraging. By no means am I in a position to compare the humble work that we do but I think what we bring is a particular flavour of a balance between design and research,” said Pomeroy when we met for a one-to-one interview after his presentation entitled Greening The Urban Landscape: Strategies For Environmental Urbanism at the festival.

“It’s a nice accolade and I am delighted and proud to be selected,” added the architect, who had been selected for the super jury in the Landscape Award category. Gramercy Residences, Manila, is the highest skypark in The Philippines with a variety of amenities. — Photo from Tom Epperson

The youthful-looking Pomeroy also observed a growing trend of assimilating skyrise greenery – his personal passion – into the projects submitted for the WAF Awards held in Singapore last month.

“From the entries, I saw increasingly, a sense of urban greenery and social space being incorporated into the schemes,” said the author of Idea House: Future Tropical Living Today (2010) and Skycourt And Skygarden: Greening The Urban Habitat (2013).

His latest book, Skycourt And Skygarden, talks about these two concepts in terms of the social, economic, environmental and spatial benefits they provide to the urban habitat. Pomeroy asserts that they have the “potential to be ‘alternative’ social spaces that can form part of a broader multi-level open space infrastructure to replace the loss of open space within the urban habitat”.

In his book, a skygarden is defined as “an open or enclosed landscaped open space that can be dispersed through the higher levels of the urban habitat or tall building”; while a skycourt refers to “an enclosure created by the void space being bordered by other buildings within the immediate urban context, or formed by its own internal facades”.

To him, completing the book marks the last chapter of 10 years of research that he first began in Cambridge University. “What we are seeing more in the urban habitat today is the role of skyrise greenery, skycourts and skygardens as a fundamental part of the habitat, not simply as cosmetic treatments that are added afterwards but increasingly being incorporated as part and parcel of the architectural design of the building.”

A? Britain-registered architect and academic, Pomeroy is a strong advocate of the sustainable built environment.

He is the recipient of the BCA-SGBC 2014 Green Building Individual Award’s Young Green Advocate Award. (BCA-SGBC stands for the Building and Construction Authority-Singapore Green Building Council.)

The founder and principal of Pomeroy Studio in Singapore designed the first zero-carbon house in South-East Asia, the Idea House in Shah Alam, in 2011.

He was also behind the first carbon negative house in Singapore (the B House) and the environmentally-friendly Trump Tower in Manila which, when completed in 2016, will be the country’s tallest residential building.

Under his leadership is also the first carbon zero community and public realm in The Philippines, a 50ha development in Quezon city said to be a first in South-East Asia.

Recently, Pomeroy and his team also announced plans for an innovative park and skygarden orientated eco-township located in Kluang, Johor.

Set to be the largest masterplanned commercial project in Kluang, Newpark will include a hotel, expo-trade centre, an education hub and also the town’s first serviced residences.

At the heart of the masterplan is the Promenade – a park inspired by the Gunung Lambak hills that form the town’s backdrop – which is designed to be a zero-energy public space. Green living will be promoted in the serviced residences, where the buildings’ optimisation of natural light, natural ventilation, grey and rainwater harvesting methodologies and solar energy exploration aim to reduce energy and water bills.

The first phase of the development is supposed to start early 2015 and will comprise a combination of shop offices alongside the hotel and its convention centre, and the serviced residences. 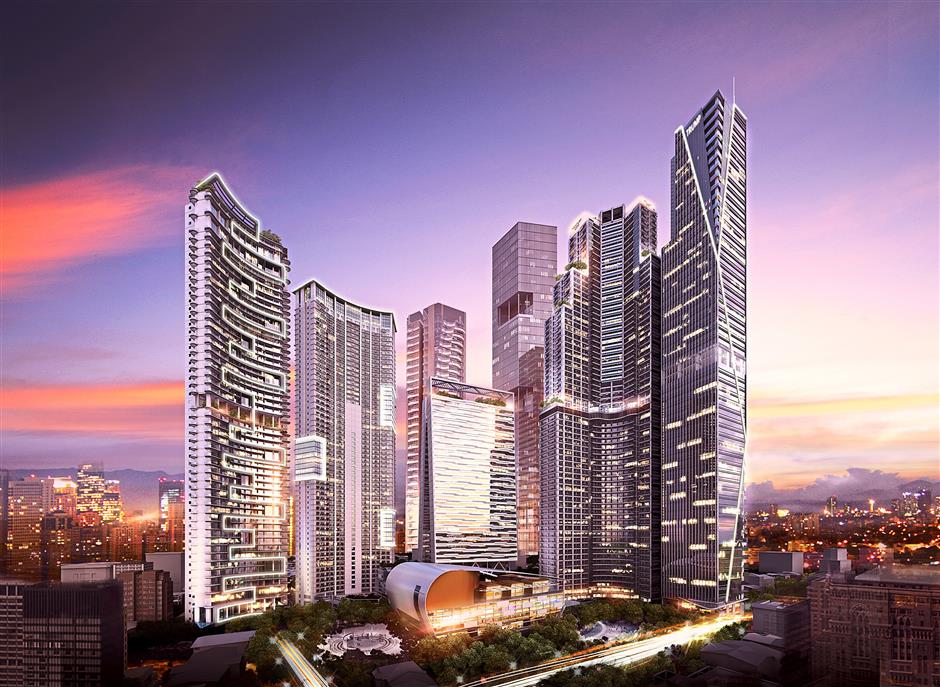 An artist impression of Century City Makati in the financial heart of The Philippines that incorporates the environmentally-friendly Trump Tower, which will be the tallest residential building in the country when completed in 2016.

Another Pomeroy project at the concept stage is the Passive Eco Pods at Lexis Resort, Port Dickson, Negri Sembilan. Measuring 170sqm each, the pods will be part of what is touted as the first 6-star resort in Malaysia. Each unit offers facilities like a private plunge pool and outdoor shower and jacuzzi. The villas will also be designed in such a way that solar heat generation is minimised.

Also at the concept design stage is The Veil in Kuala Lumpur, a bio-climatic 42-storey mixed-use project located within the Golden Triangle. An estimated four-year project, it will feature office, retail, food and beverage space, a hotel, and penthouses that are separated by skycourts.

In his work as an eco-architect, Pomeroy conceptualises and designs projects from the macro scale of a city to the micro level of a dwelling.

“We are happy working on everything from a carbon negative house to a tall building, or clusters of tall buildings such as in Century City (at Makati) in The Philippines, which allows us to explore a variety of architectural typologies of buildings 50 storeys and above,” said the masterplanner. 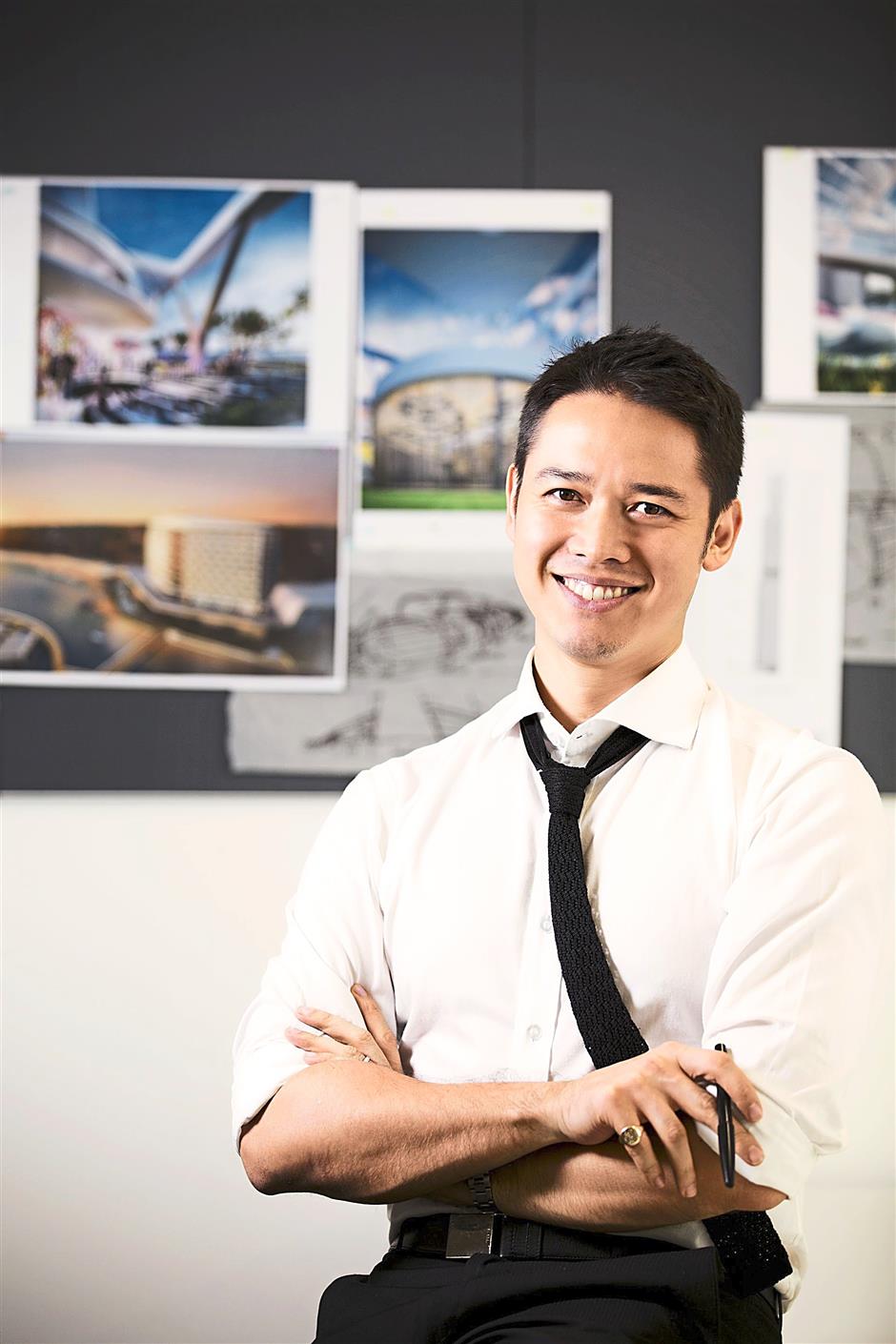 Prof Jason Pomeroy believes – and has proven – that, unlike conventional thinking, it is possible to create zero energy developments at no additional costs. — Pics from Pomeroy Studio

“It used to. The common perception is that they have significant maintenance issues but that’s because people don’t know how to design it properly. So landscape artists, architects or designers may be orientating the position of skycourts and skygardens in areas that do not embrace natural lighting and natural ventilation; or plant species are being specified incorrectly out of their climatic zone,” said Pomeroy, who sits on the editorial board of the international organisation Council of Tall Buildings and Urban Habitat.

“Our experience has allowed skyrise greenery to flourish. For instance, the Gramercy Residences (in Manila) has the tallest vertical green wall in the country that is actually embedded deep within the building. However, because of the opportunity to embrace natural light and ventilation, the green wall flourishes.

“And it’s not just about the cost but about enhancing the value of your real estate. What we can see is that these greener environments may actually increase value by 10%,” added the active member of the Singapore Green Building Council.

He highlighted other plus points including enhanced productivity in the workforce by looking at greenery; socio-physiological benefits associated with greenery in healthcare environments; green roofs reducing ambient temperatures between 3°C and 5°C; and how 1sqm of green roof can absorb 6 litres of water, helping to mitigate floods.

Having been in the industry for many years, changing mindsets remains a key hurdle in advocating green developments.

“The major challenge is to alter people’s mindsets that zero carbon projects are going to be expensive developments. I have proven time and time again that it is possible to create zero energy developments at no additional costs to the business,” maintained the host of City Time Traveller, a 12-part architecture travel TV series on Channel News Asia.

“The first carbon negative house (meaning it generates more energy than the house can consume) in Singapore is actually built at the same price point as a similar sized bungalow in the same area. In The Philippines, we are creating complete zero carbon public realms that are low- to medium-cost housing developments,” shared Pomeroy, who is of Malaysian Chinese and British parentage.

How does he foresee cities evolving in the next decade and beyond?

“I think the Asian city will be a hybrid city – a marriage of old, contemporary and what we can call futuristic. The vestiges of a 19th century colonial or indigenous past (the ubiquitous shophouses of Telok Ayer in Singapore, or the Hutongs in Beijing) will be retained as urban artefacts of nostalgia to remind us of yesteryear.

“The layering of the contemporary, in the form of tall buildings and new structures, will act as a reminder of economic progress and technological advancement in the 20th century. But the 21st century layering will come as a result of climate change, (increased) inner city migration and further technological advancement,” said the special professor at Nottingham University, Britain.

“Buildings may not need unsustainable demolishing but will be simply extended upon above the roof tops, and they will be interlinked to other structures via skybridges.

“Skygardens will be in abundance given the need for alternative social spaces for people to interact in, in such increasing inner city densities. They would also provide an opportunity for rooftop urban farming as well as help reduce noxious pollutants in the atmosphere and the searing heat of the city,” he said.