Taming the wild: Wildlife rangers and researchers collaring a wild elephant bull, which will enable tracking of its movements in the forest. – MEME

Mobilising cheap, modern technologies and out-of-the-box thinking, scientists are trying to overcome the challenges of studying elephants in the wild.

Showing off a picture of a dung-coated seed almost the size of his hand, he explains that very large fruits require very large mouths. Elephants might swallow a sugar palm seed (like the one he is holding) at one location and defecate it, along with a tonne of nutrients, at another. In this way, elephants occupy a unique and irreplaceable niche as gardeners of the forest.

They shape the landscape and promote forest regeneration – trampling the soil, eating and modifying the structure of vegetation, and releasing plant parts that are consumed by herbivores, says Campos-Arceiz.

Which is why the associate professor at the University of Nottingham Malaysia’s Tropical Conservation Ecology Lab wants to find out what would happen to large-seeded fruit trees, such as durian, cempedak and mango, if elephants disappeared from the forest.

MEME, which stands for management and ecology of Malaysian elephants, is a five-year umbrella research project with big ambitions. Spearheaded by Campos-Arceiz, the project is overseeing studies that delve not just into important ecological questions, but ones that relate to the behavioural, biological and social elements of the Asian elephant.

In many ways, MEME, which is a joint project between the university and the Department of Wildlife and National Parks, has signified a new dawn not just in research but also in the way we look at elephant conservation in Malaysia. Up until now, conservation and human-wildlife conflict mitigation strategies have been based on expert advise. The problem with that is, if it’s wrong, years of conservation efforts and dollars could end up down the drain.

“What we want to do, is let the data talk,” says Campos-Arceiz, who has studied elephants for 10 years.

The aim is to generate data that will facilitate evidence-based conservation. This in turn will help government devise more effective and cost-efficient management strategies.

Thanks to funding from the Sime Darby Foundation, Campos-Arceiz has assembled a dream team for MEME comprising conservationists, IT experts, and a new generation of environmental science graduates. Mobilizing cheap, modern technologies and out-of-the-box thinking, they are trying to overcome the challenges of doing research in the tropical rainforest.

It is very rare for researchers to conduct elephant behavioural studies in the jungle. MEME is doing this by making use of the increasing affordability of camera trap technology. The cameras are craftily positioned at specific locations within the Belum-Temengor rainforest in Perak, where elephants are known to come and eat the mineral rich soil to supplement their diet.

The behaviours and interaction caught on camera (footage of this is available on YouTube) have provided insights not just into the demographic composition of Asian elephants living within the Malaysian rainforest, but also their social dynamics.

“One sub-adult was seen holding the leg of the female in front with its trunk, as if holding hands,” enthuses Hii Ning, a bright, 23-year-old research assistant.

Some, Campos-Arceiz included, admit to envying Hii’s job, which can be seen as spending hours watching back-to-back episodes of National Geographic. But it isn’t all fun and games. Every detail is meticulously recorded. Hii’s initial task is to identify distinguishing features for each elephant. Then she has to keep track of the elephants’ physical conditions and notable behaviours, before organising all the data for a more thorough analysis.

Of course she’s found nicknames for them.

“That one’s Lady lumpy,” she says pointing to a female with lots of bumps on her back – probably the result of a skin infection, according to Campos-Arceiz.

A month into the video analysis, the effort has proven to be priceless. It shows 50 elephants – about four times what Campos-Arceiz was expecting – have been frequenting the same mineral-rich soil spot.

“This means elephants are coming from far away, so this resource is very important,” says Campos-Arceiz.

Elephants in the African savanna may be among the most studied wildlife in the world, however we know little about the demography for Asian elephants.

For example, how many newborns are there every year? How long before calves separate from their mothers? What is the ratio between newborns, juveniles and adults within a population?

Hii and the team hope that over time, their camera trap footage will help us answer some of these questions, shedding light on the private lives of these fascinating, but endangered animals.

Toy with a purpose 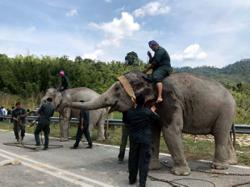 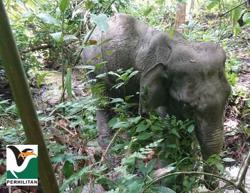 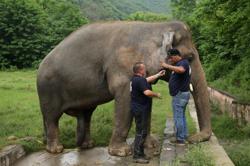 Cambodia: Only Asian elephant in Pakistan prepared for new home