These hikers don't let age stop them from being adventurous

Kanchana persevered even when the going got tough.

When my friend Paige Lee invited me to scale Mount Binaiya, the highest peak in the Maluku Islands, Indonesia, I agreed immediately.

I became “alive again” at the chance to go hiking in Indonesia as I had had an awe-inspiring adventure at the remote Mount Tambora in West Nusa Tenggara last year.

We managed to gather a team of six hikers – ranging from age 56 to 62 – for the trek. So, off we went... with our stacks of medical records.

Fifty-six-year-old retired teacher Lee led the team; I was her assistant. Our team members were Damayanthi Rasappan whom at 62 was the oldest among us, her 60-year-old sister Rajaswari Rasappan, my wife Kanchana Devi, 56, and William Leong, 62, joined us. I am 59.

On arrival at Pattimura airport in Ambon, we were warmly greeted by our guide Budi Peak, a tall imposing figure. We travelled by van from the airport to Tuleha Harbour. Then, we went by speed boat to Seram Island, Maluku where Mount Binaiya is located. From the port, it was a two-hour journey by road to Masohi, the biggest town on the island.

All hikers to Mount Binaiya must get their medical check-up done at the local hospital. For those who fail, the journey comes to an abrupt end. 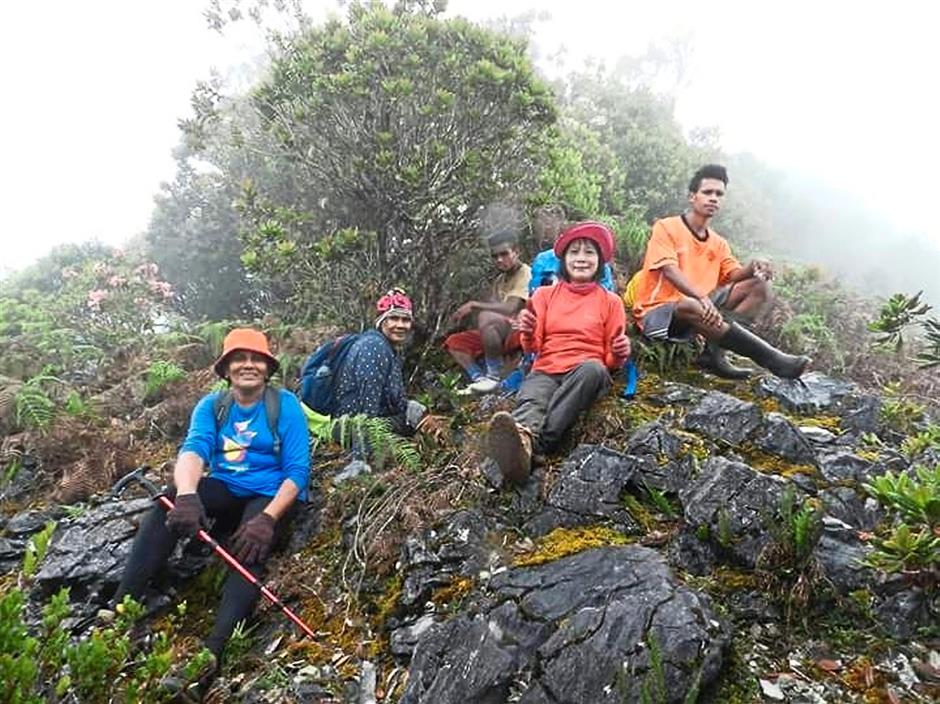 Climbing Mount Binaiya was an awesome challenge for this group of hikers.

Fortunately, we passed our medical check-up. But there was more red tape as we had to report to the local police for their approval as well.

We waited two hours at the police station where we saw lengthy exchanges between our guide and the police.

Budi told me the police officer was reluctant to give his approval to a bunch of elderly people even though the doctor had given us a clean bill of health.

This is because as far as they knew, the oldest climber to scale Mount Binaiya was an Indonesian man who was either 52 or 54 years old. Our youngest team member was 56 and a woman!

But we are mountaineers who have been trekking religiously on our own for many years. We are in shape and are always fit to climb, so we do not need special training or youth on our side. Regular lifelong exercise is good enough to climb most mountains. 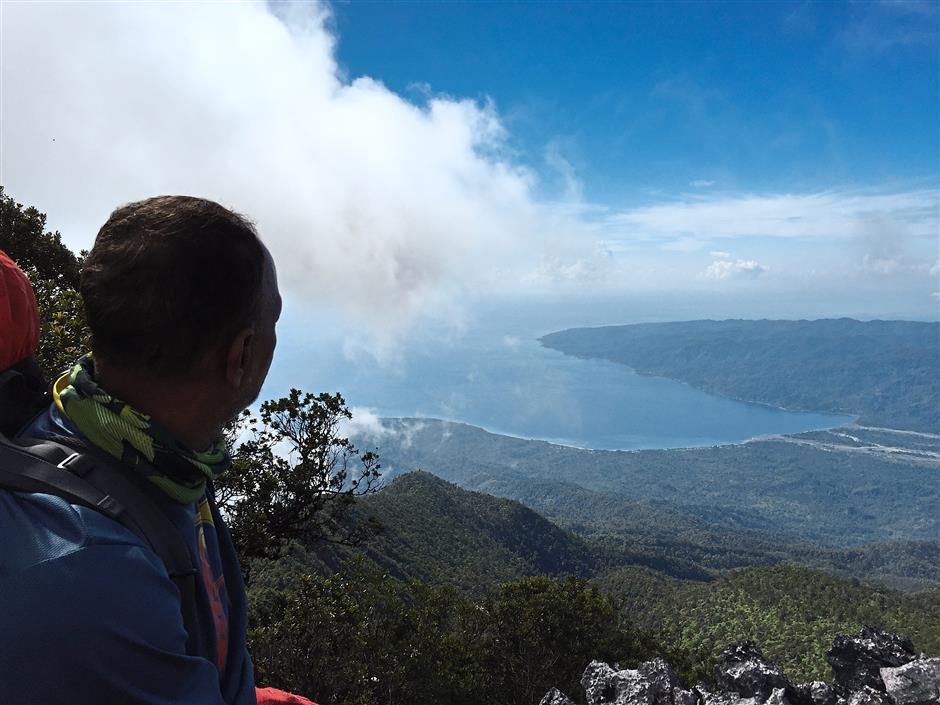 The view from the mountain peak is one of the rewards for the difficult trek to Mount Binaiya's summit.

In fact, the six of us have never hiked together. We usually bump into each other on mountain trails or at the airport.

The officer finally relented when he saw the photo of our hikes to some of Indonesia’s most famous peaks on Budi’s handphone.

I’d forwarded the photos to Budi as I’d anticipated that the local authorities might not be convinced senior citizens like us could hike up Maluku Islands’ tallest mountains.

With our police permit in hand, we then left Masohi and headed for Piliana village which was our final destination before the hike.

After a good night’s sleep at Piliana’s village headman’s hillside bungalow and a breakfast of fried rice and coffee, we were ready to embark on our trek.

But local customs require that we attend a ritual ceremony to ask for blessings for our journey.

After the ceremony, we began our trek. We crossed three rivers that day. We came prepared for the river crossings with sandals and “Adidas kampung”. But much to our delight we could cross without taking out and wetting our hiking boots. 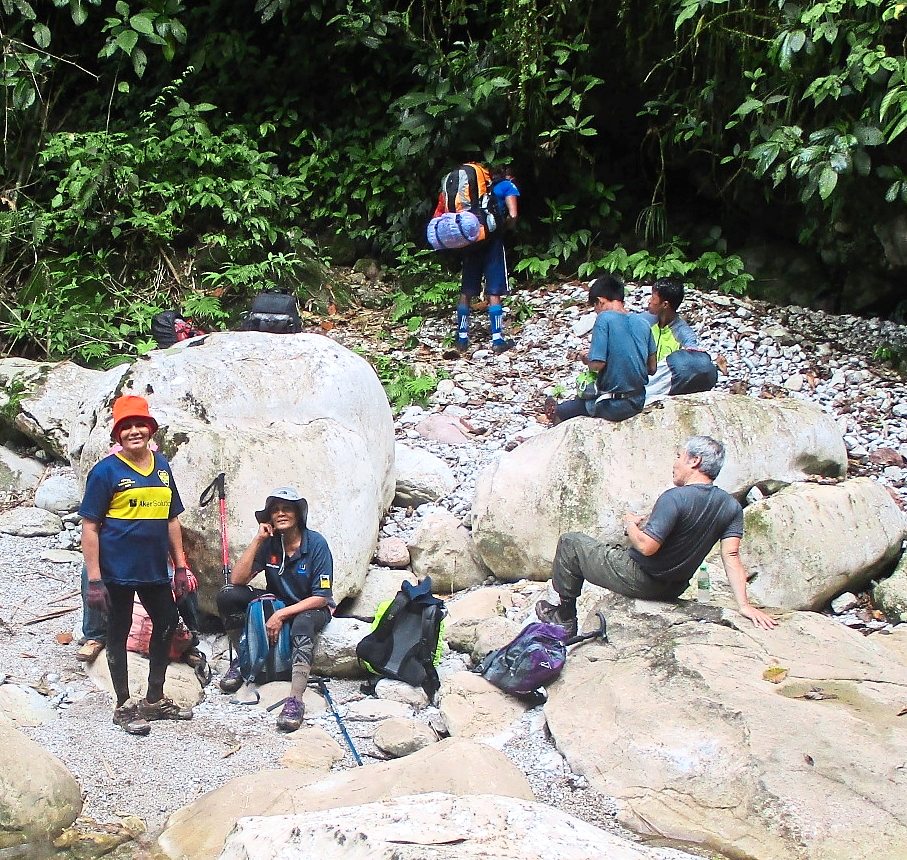 The week-long trek was arduous at times but there were nice scenic spots for breaks.

Our feet were dry but we were drenched by the time we got to our shelter for that night as it had rained. Weather is so unpredictable in the mountains and our guide told us weather forecasts are unreliable.

After dinner later that night, I saw that our porter Erick had brought back a bunch of giant leaves that looked like betel leaves. These leaves had very fine thorns on one side and felt coarse like sand paper. It’s called daun gatal (itchy leaves). Erick and the other porters rubbed their legs with the leaves, and they said it was to reduce their aches and pains.

Leong was the first to rub the leaves on his legs, and I followed suit. They say curiosity kills the cat for I immediately regretted using the leaves. It was like scraping your skin off with a sharp fork. I felt a painful, burning sensation. My legs started swelling and my skin felt like sand paper.

But the suffering didn’t last long. An hour later, my legs felt nice and warm. The swelling subsided as quickly as it appeared. My legs felt so light, and all my aches and muscle tightness vanished into thin air. I was ready to run.

I was amazed by this incredible local medicine.

It was perhaps good that we got our leg therapy for the second day’s hike was steep and brutal.

We were en route to Mount Teleuna, the first of the three mountains we had to climb to reach Mount Binaiya. The occasional drizzle added to our woes.

Kanchana began to struggle. Having barely recovered from a year-long knee injury, she was at times crawling up on all fours.

I had asked her when she was struggling up Mount Tambora last year why she climbs mountains when she always seems to struggle. 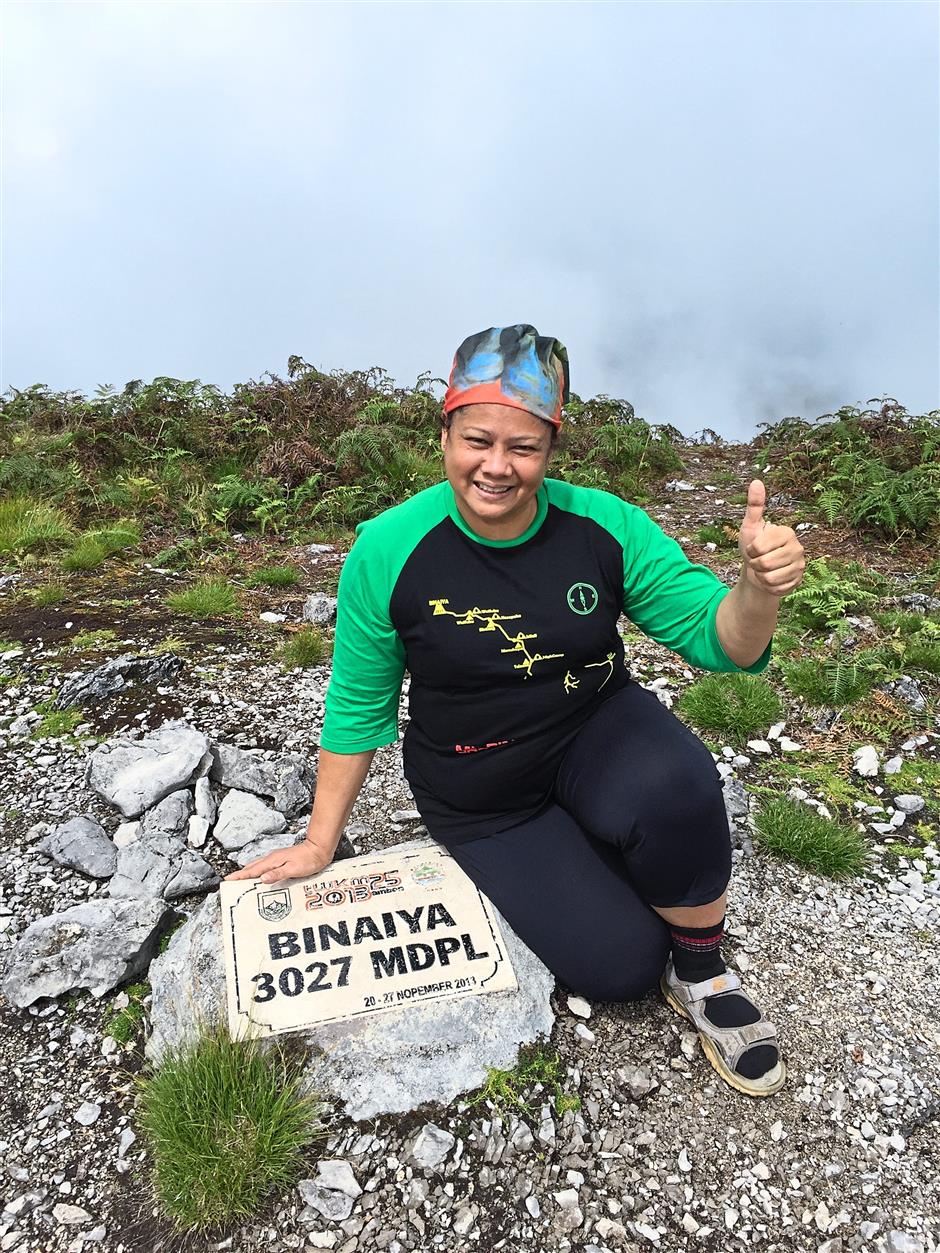 Kanchana often struggles on the trails but she perseveres because reaching the summit gives her a sense of accomplishment and freedom.

Kanchana said “When I reach the summit, an incredible feeling of accomplishment and freedom engulfs me. I’m going for that fix.”

We stopped before we reached Camp Isilali, the day’s destination. Instead, we put up for the night at High Camp as it was already late evening. It was much colder here, probably 10°C.

We were tired. Exhaustion began to creep in. We talked little, ate a lot and slept early.

I had studied the trails many times before embarking on the trip and I knew what was in store for this senior citizens’ team on Day Three.

If the first day’s climb up Mount Teleuna was brutal, then the hike up Mount Manukupa was scary.

At times, we had to walk along narrow ridges with a-thousand-feet drop. The small rocks that littered the trail were loose under our feet, which made for a slippery trail. I was really scared we’d slip and fall. No wonder mountaineers are banned from trekking at night on Mount Binaiya.

Whenever I saw a wide space, I’d lie down to catch my breath and ask myself why I am climbing mountains instead of relaxing in a pub listening to Tom Jones.

Why do I climb mountains? For me it’s the nature of my human spirit. When I stop exploring, seeking and climbing mountains, I quickly degenerate.

As Edmund Hillary said, “It’s not the mountain we conquer, it’s ourselves.” 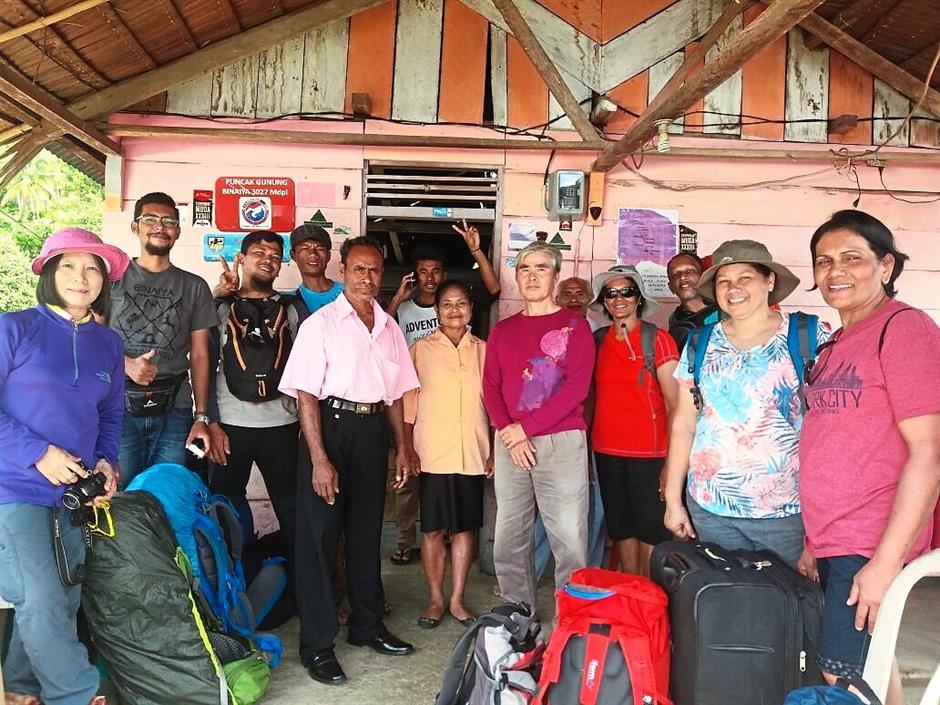 The local headmen sent the team off with a ceremony to pray for their safe journey.

It took us another three hours to reach Mount Manukupa’s peak. We wanted a longer break but Budi hurried us on as he wanted to avoid trekking at night.

Luckily for us, the third mountain that we had to conquer was neither scary, brutal nor dangerous. It was a winding climb up Mount Bintang but the trail was a lot safer and less demanding.

Mount Bintang had a large flat top and gave us an almost 360 panoramic view of the surroundings.

As we descended Mount Bintang and hurried towards Nasapeha campsite, we saw some of the most dazzling views of the mountains and valleys.

We then entered a mossy forest that was out of this world. As it got darker, the mossy forest glowed. It was like a dimly-lit village trail of extraordinary beauty. I had never seen anything like this. Though I used my head lights, I actually could see the path without it.

It was very cold when we arrived at Nasapeha but our mood was good as the hike to the summit the next day was a relatively easy one.

It’s Day Four and D-day! Summit Attack begins. My teeth were shining as it was the first time I’d brushed it since we started our expedition. There was also the smell of perfume in the air. We were getting ready for our graduation!

But there were still surprises waiting for us. On the way to the summit, there was a giant tree that stunned me. It was standing there majestically all alone like the tree in Avatar among the shrubs. How could it have grown so high in the mountains above the tree line? I gave it a hug.

This is why I climb mountains. I get to see and experience things I wouldn’t even dream of.

By early afternoon, all of us had reached Mount Binaiya’s summit.

As I stood at the peak and looked around, I was enthralled by the breathtaking view. It was humbling; I felt so small and quickly reset my size. 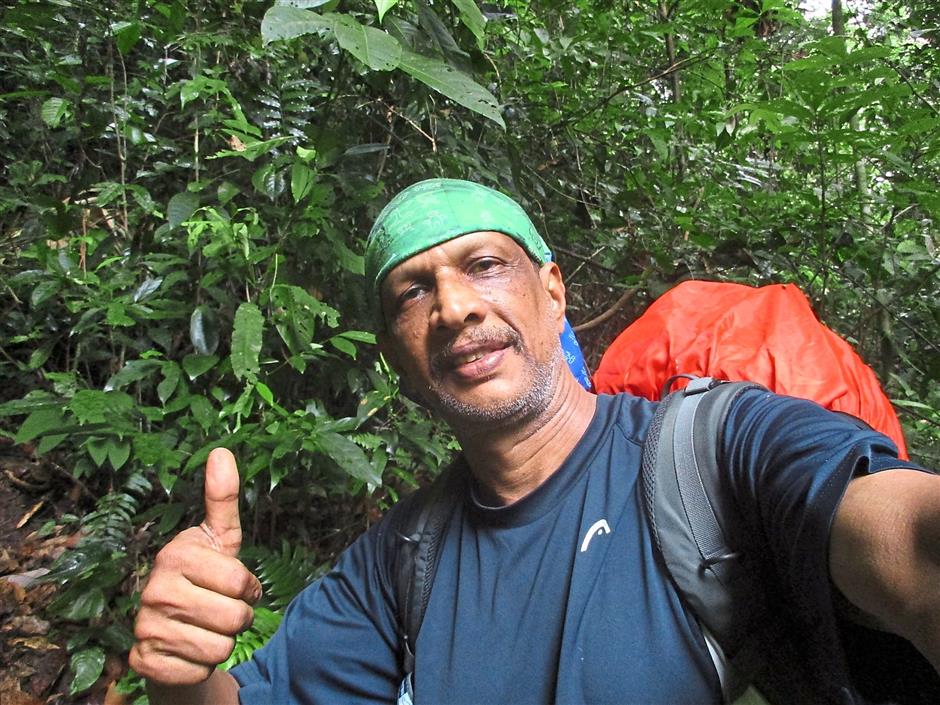 Murugiah climbs mountains because it makes him feel alive.

One of the reasons Mount Binaiya is relatively unknown is due to its inaccessibility. It took almost four days of seven-to-10 hours of trekking to get to the peak and another three days to come down from the mountains.

It is all part and parcel of mountaineering. Believe me, it’s totally worth the blisters and risks.

Our trip was more incredible than we could ever have imagined. We struggled throughout the journey but age was never a factor. Our olden years are truly golden.

These hikers don't let age stop them from being adventurous