Ramadan is all the more poignant for Muslim expatriate families who keep to their fasting rituals while embracing Malaysian culture.

PAKISTANI Omer Sohail was surprised when his colleagues planned a buka puasa event and invited friends of other faiths for his first Ramadan here.

“Those who were not fasting joined in the festivities too. It was different for me because back home we usually break fast with family and relatives. So this was a new experience,” shares Omer, who was born in Lahore, Pakistan but studied in Saudi Arabia.

The food and beverages executive said Ramadan is different in Malaysia compared to Pakistan and Saudi Arabia because “in Malaysia, no matter what race or religion one is, the spirit of Ramadan is found in everyone.

“This is a rare sight in Pakistan and Saudi Arabia,” says Omer.

This is Omer’s eighth year in Malaysia. He first came here in 2006 as a student of the Asia Pacific University of Technology and Innovation (APU, formerly known as APIIT). Towards the end of his course, he met his wife Nurul Huda Al-Hassan.

They married in 2011 and Omer decided to stay on in Malaysia. The couple now have two daughters.

“I go back to Pakistan at least once a year to visit my mother and brothers.

“However, since having a family of my own, we’ve been spending Ramadan and Eid al-Fitr (Hari Raya) here in Malaysia,” shares Omer.

They celebrate Hari Raya with Nurul Huda’s family and friends in her hometown in Ipoh, Perak.

One of the Ramadan rituals Omer likes in Malaysia is visiting the bazaars.

“I am amazed at the amount of food found at these bazaars.

“In addition, everyone visits the bazaars here, no matter what race or religion you are,” says Omer, adding that such Ramadan bazaars are not found in Pakistan.

“We have stores that are open at different hours to accommodate those who are fasting. For example, they only open from late afternoon till 2am,” he says, adding that it is usually difficult for those who are not fasting to find food in the daytime during the fasting month.

“This also means heavy traffic in the evenings and very little to do during the day for non-Muslims,” says Omer.

During Ramadan, Omer and his family are usually up all night and only sleep after sahur (pre-dawn meal). They are out in the early hours, and there are traffic jams at 4am as people rush home before the dawn Fajr prayers and restaurants start shutting down.

“We only sleep for maybe four to five hours a night, throughout the month. This tends to slow us down during the day. Therefore, it is common for productivity to drop as everything moves at a slower pace. It is very noticeable back home and it seems like time moves a lot slower.

“Here, on the other hand, everything

operates normally, except for certain places that may observe the Ramadan business hours,” says Omer. 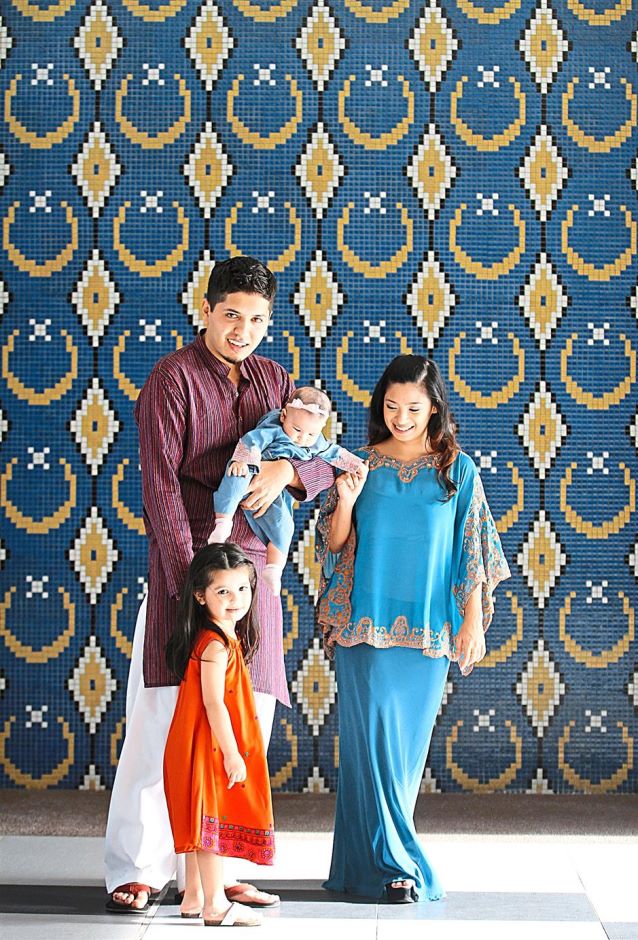 It’s all about family: Some day, Omer Sohail hopes to observe Ramadan in Pakistan with his Malaysian wife Nurul Huda and their two daughters. — FAIHAN GHANI/The Star

As for rituals such as prayer time and traditions, Omer explains that it is pretty much the same in Malaysia as it is in Pakistan and Saudi Arabia.

“Muslims all around the world observe the same traditions when it comes to praying. The special night prayers called terawih prayers take place throughout Ramadan.

“Throughout my eight years here, there are some traditions I like here and some that I miss from home. One day I want to take my family back to Pakistan during Ramadan so they are exposed to the best of both worlds,” concludes Omer.

Nazeen Koonda, 33, holds out a plate of pakora, or potato fritters, and says: “You have to try this.”

She beckons us to try the chana chaat, a sumptuous chickpea salad and proceeds to introduce the rest of the spread on the table: fried lentil dumplings in yoghurt sauce called dahi vada, a bowl of fruit chaat, or fruit cocktail salad seasoned with salt and pepper and minced beef and chicken kebabs called chapali.

“This would be a typical buka puasa, or iftar, spread for us back home,” says the communications specialist who hails from Hyderabad, India.

Nazeen and her husband lead solutions architect S.G. Masood, 33, have been celebrating Ramadan in Kuala Lumpur for over seven years. “Ramazhan”, as they would pronounce it, is a low-key affair for the couple who usually end their day of fasting with Terawih prayers together at home. 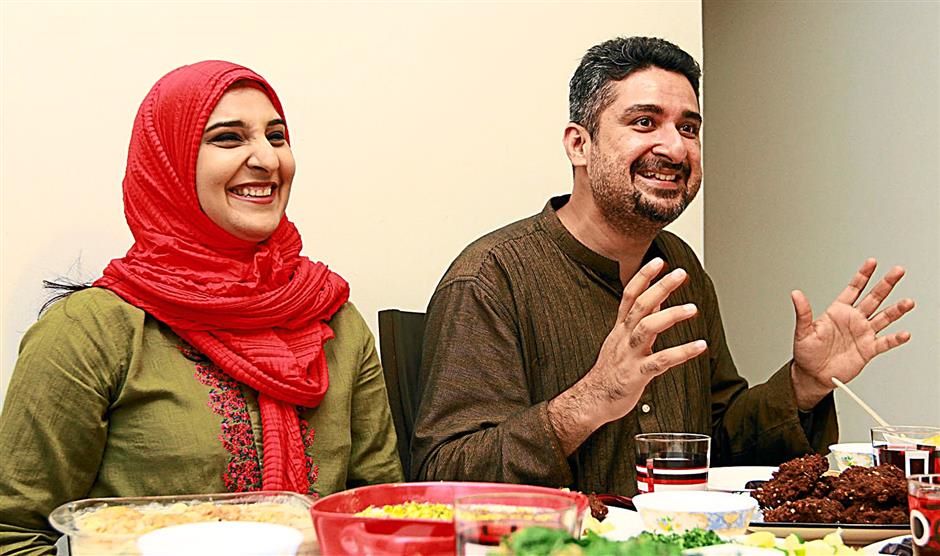 The culture of eating out at Ramadan buffets was something they had to get used to since moving here. “In Hyderabad, you almost always break fast with family at home over a homecooked meal,” shares Nazeen.

With no other family but each other here in Malaysia, Nazeen and Masood have taken to inviting close friends over for iftar in recent years.Tonight’s iftar, for instance, is with long-time friends Ahsan Qureshi, 37, and his wife Mehwesh from Karachi, Pakistan.

Ahsan, a photographer, and Mehwesh, a competency development specialist at Phillips Malaysia, have been staying in KL for the past five years. The couple travel back to Karachi yearly but rarely during Ramadan.

Mehwesh, 32, points out that Pakistan and India share many cultural similarities when it comes to celebrating Ramadan.

“The only difference would probably be in the food served during Ramadan – in Pakistan, we have something called khajla, a crispy, sweet bread that we crush and soak in milk overnight. It’s very filling – we eat it for sahur,” she says. Khajla, unfortunately, is not easily available in Malaysia.

Another thing that Mehwesh misses seeing from home are the iftar food volunteers on the roads.

“We have massive traffic jams in Karachi. During Ramadan, you’ll see volunteers from different NGOs handing out trays of dates, fruits and sometimes drinks to those stuck in traffic during iftar,” she recalls.

“It’s a tradition for us to visit the home of each and every family member, even if they’ve already visited yours, and have a taste of their sheer kurma.

“By the end of the day, you would’ve visited 10 to 12 houses, and probably not want to see another bowl of sheer kurma for a long time,” jokes Masood.

In KL, Nazeen has continued to share bowls of the festive pudding with her neighbours.

“Whenever we make sheer kurma, we believe in saving one part for our neighbours, one part for the poor and one part

“I usually will make more to share with my neighbours and also the security guards who work at my condominium,” she says.

The Eid festivity back home includes the handing out of eidi, not unlike the duit raya custom here.

“Eidi is given to those who are younger than you are. It’s straight-out cash, minus the envelope. Come Eid Mubarak, you would see people carrying stacks of cash with them. Young boys would excitedly purchase a new wallet on the eve of Eid and young girls would be carrying a handbag to store the cash,” shares Mehwesh, who still receives eidi from her older siblings and relatives.

“Eidi is a great form of incentive – it can help encourage children and teenagers to visit their relatives, for one. When I was younger, if I could fast for 30 days, my uncle would give me more eidi,” Mehwesh adds.

Unlike in Malaysia, where the Raya celebration lasts for weeks on end, Karachi celebrates Eid for all of three days, at the most.

“We rarely take long leave to celebrate Eid, since we don’t have to ‘balik kampung’. Here, you have open houses in the weeks following Raya; back home, no one talks about Eid past the third day,” says Mehwesh.

To this Nazeen adds: “In India, by the third day, you’re back at work.”

This year, the two couples are looking forward to visiting a Malaysian family in Penang for Raya.

“The first Raya we had here, we didn’t know anyone. I remember cleaning the house as I would always for Eid, preparing the sheer kurma and setting the table. Ahsan went for his prayers and came back. The both of us were dressed in our new clothes and we looked at each other and said: ‘Now what should we do?’

“I felt really depressed then. It’s quiet in KL during Raya. To enjoy the festivities in Malaysia, you really need to know the locals well, and perhaps get an invite to follow them back to their kampung,” says Mehwesh.