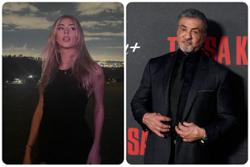 Sylvester Stallone pulled no punches when recently asked for his thoughts on Creed III, the latest boxing film in the Rocky franchise and the first to exclude him from the cast.

"That's a regretful situation because I know what it could have been," said Stallone, who has played Rocky Balboa in every other Rocky and Creed instalment.

"It was taken in a direction that is quite different than I would've taken it. It's a different philosophy – (producer) Irwin Winkler's and Michael B. Jordan's. I wish them well, but I'm much more of a sentimentalist. I like my heroes getting beat up, but I just don't want them going into that dark space. I just feel people have enough darkness."

Stallone has been outspoken in recent months about his distaste for the Winkler family and what it has done with the Rocky franchise.

And he has been vocal about desiring a greater ownership stake in the blockbuster saga. By the time THR's cover story came out, however, Stallone had accepted that was "never gonna happen".

"It was a deal that was done unbeknownst to me by people that I thought were close to me and they basically gave away whatever rights I would have had," he told the trade publication.

"At the time I was so excited to be working and I didn't understand this is a business. Who knew Rocky would go on for another 45 years? I've never used one (line of dialogue) from anyone else – and the irony is that I don't own any of it. The people who have done literally nothing control it."

Stallone also revealed that the Winklers recently asked him to do another Rocky film and that he was initially "willing to do it" – until they refused to give him "a piece" of what he "created all these years ago".

"You can't (make a Rocky sequel) just because you want your children to have a job," Stallone told THR. "Or if you don't get more money, that you can block it. The other producer, Bob Chartoff, was always very nice. Irwin Winkler was just the opposite."

Though his opinion of the Winkler family remains low, Stallone said he was able to reconcile with actor Dolph Lundgren after calling his former co-star out for not involving him in the reported Drago spin-off centring Rocky's old rival, Lundgren's Soviet-Russian boxer Ivan Drago.

Lundgren claimed at the time that he thought Stallone was on board.

"The Dolph thing, again. This is a classic case of them going around and trying to continually cherry-pick aspects of Rocky without even asking me if I want to join in.... I'm the only one left out."