Wilde’s personal life has drawn a lot of attention of late partly due to her relationship with Harry Styles. Photo: AFP

The Don’t Worry Darling director, 38, is addressing speculation that she has put her role as a mother on the back burner.

“I share custody of my kids with my ex (fiance Jason Sudeikis),” Wilde said in an interview with Elle. “If I’m photographed not with my kids, people assume I have abandoned them, like my kids are just somewhere in a hot car without me. The suggestion is that I have abandoned my role as a mother.”

Wilde said paparazzi photographs of herself and children Otis, eight, and Daisy, six, are rare “because I don’t let them get photographed.

“Do you know the lengths that I go to to protect my kids from being seen by you?” she continued.

Wilde’s personal life has drawn even more attention of late than her hotly anticipated sophomore feature, partly due to the real life romance it spawned with her star Harry Styles.

News of Wilde and Sudeikis splitting up was first reported in November 2020. This past spring, Wilde was served custody papers while on stage to promote Don’t Worry Darling at CinemaCon.

Sudeikis said in a statement that he had “no prior knowledge” the move would be made on such a large scale, but Wilde told Variety in August, “It was my workplace. In any other workplace, it would be seen as an attack. It was really upsetting. It shouldn’t have been able to happen.”

She challenged his claim that he’d been unaware of where she would be served, noting the protocol required to enter the venue. 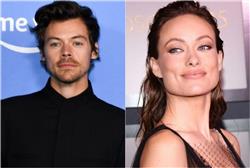