Hyun Bin returns to the big screen after marriage in 'Confidential Assignment 2: International' 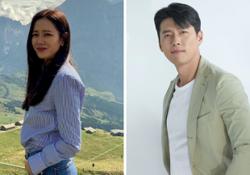 Actor Hyun Bin will be back in his first movie since getting married to actress Son Ye-jin in March, starring in the sequel to Confidential Assignment (2017).

The action-packed trailer for Confidential Assignment 2: International was released on Monday (Aug 1) and sees Hyun Bin, 39, reprising his role as a North Korean detective who teams up with his South Korean counterpart (Yoo Hae-jin) to catch criminals.

Girls' Generation's Yoona also reprises her role as the sister-in-law of the South Korean detective.

New faces in the sequel include American actor Daniel Henney, who plays an FBI agent, and South Korean actor Jin Seon-kyu as the criminal mastermind.

The original was the third highest grossing movie in South Korea in 2017, taking in US$57mil (RM254mil) at the global box office.

The highly anticipated sequel opens in South Korea next month.

Hyun Bin's last movie was period zombie flick Rampant in 2018 and his last drama on television was Crash Landing On You in 2019 to 2020, during the filming of which he fell in love with his co-star and now wife Son. – The Straits Times/Asia News Network