At about 10.30pm on Thursday with the show under way, one of the giant screens in the air, measuring four metres in length, appeared to break off from suspension wires, crashing onto the stage and hitting two dancers performing with boy band members. Photo: SCMP

One of two metal cords suspending a massive screen had snapped at the concert of popular Hong Kong boy band Mirror, causing the structure to crash onto the stage below and hit two dancers in a horrific mishap that has shocked the city.

Authorities revealed their preliminary findings on Friday (July 29), with Secretary for Culture, Sports and Tourism Kevin Yeung Yun-hung conducting an initial inspection of the show venue at the Hong Kong Coliseum in Hung Hom.

“A preliminary inspection suggests that a metal cord has snapped, causing the screen to fall down,” Yeung said, reiterating the government’s deep concern over the incident. 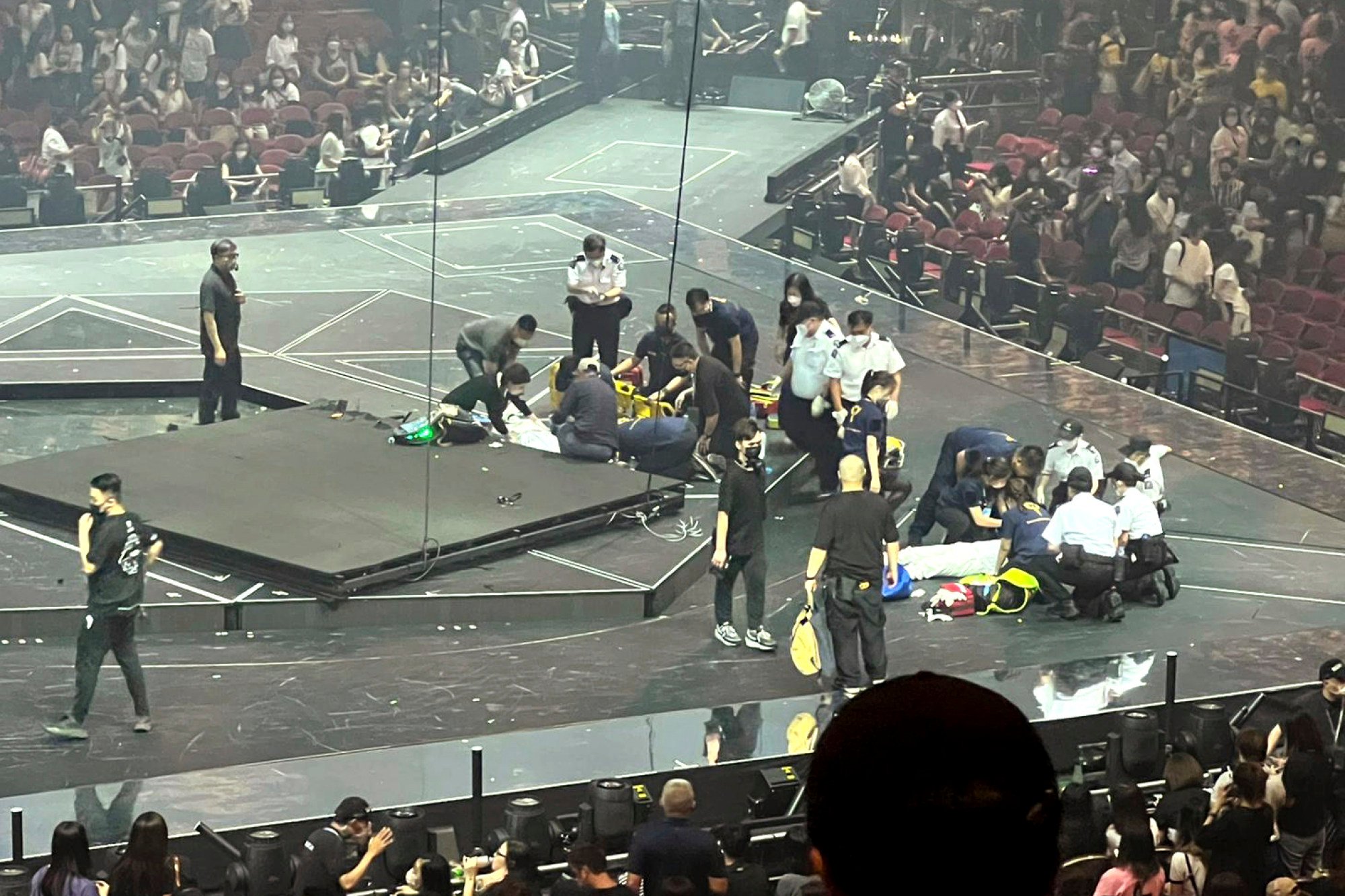 Yeung said the probe could last for a few weeks, and authorities would approach other performing groups to examine risks for their acts.

He refused to reveal the identity of the contractor involved in the set-up of the problematic screen at the Mirror concert.

Meanwhile, Secretary for Labour and Welfare Chris Sun Yuk-han said authorities had ordered all activity under the remaining screens at the venue to be suspended, and for organisers to work with relevant officials before removing the devices.

He said officers from the Labour Department had already visited the venue to collect evidence and would carry out enforcement action, including laying prosecutions under the Occupational Safety and Health Ordinance if necessary.

Yeung also said experts would examine the suspension wires in question and ascertain if the incident was centred on operational procedures or the actual material of the cables. 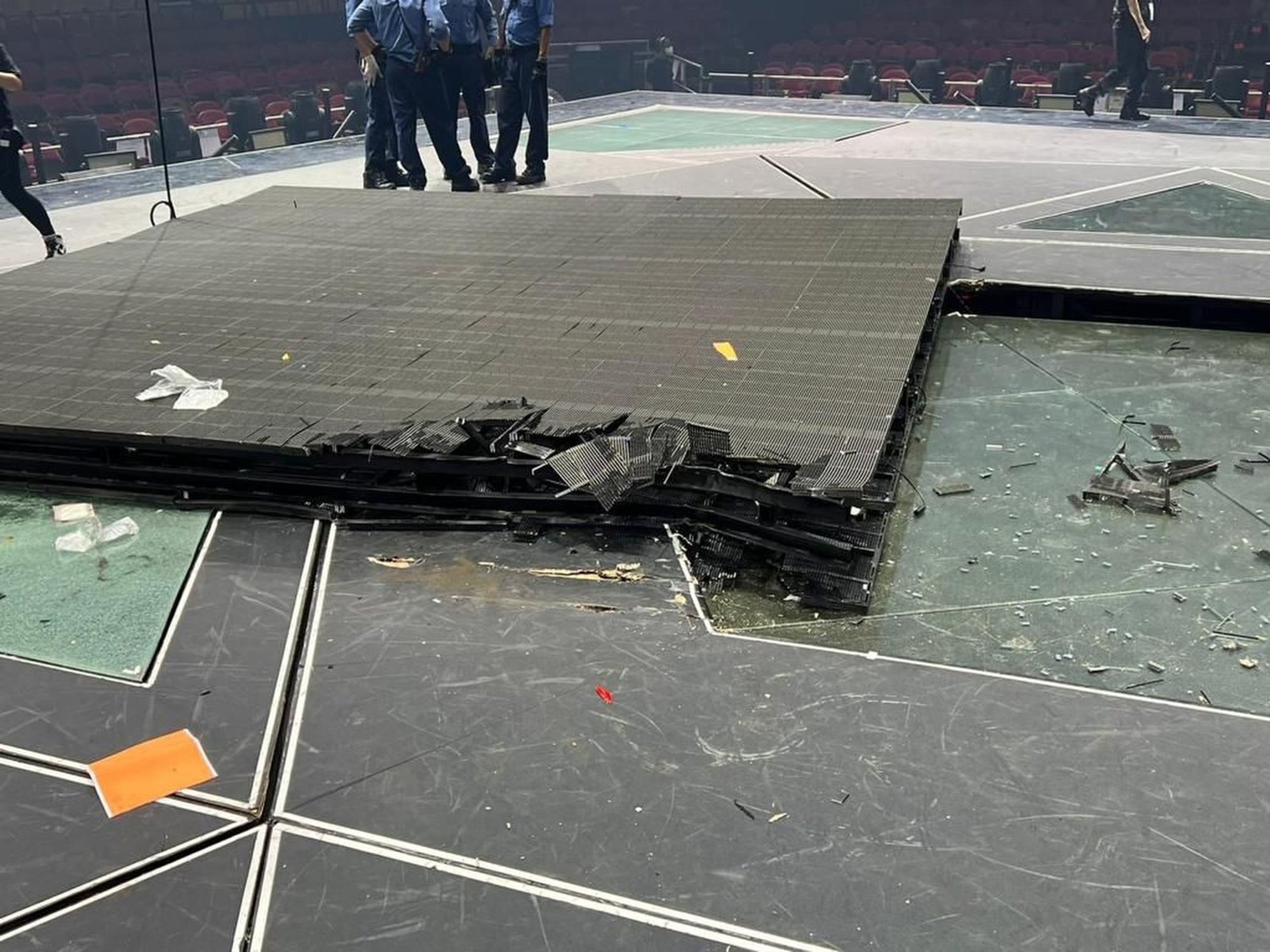 MakerVille, the entertainment business arm of telecoms company PCCW, and show organiser Music Nation said in a latest statement that they were working with the authorities, as well as the contractor and subcontractors behind the stage structures, to carry out a thorough probe.

The share price of PCCW, listed on the Hong Kong stock exchange, was down 0.7%.

“If we detect any suspicion of impropriety by anyone or unit involved, we will contact police immediately,” the statement read, adding that

The band was performing their fourth gig of a planned 12-show series when the mishap struck, with previous concerts already plagued by minor safety incidents, one of which involving a Mirror member falling off an elevated stage, resulting in an abrasion.

At about 10.30pm on Thursday with the show under way, one of the giant screens in the air, measuring four metres in length, appeared to break off from suspension wires, crashing onto the stage and hitting two dancers performing with boy band members.

The two male victims, aged 27 and 29, were rushed to the Queen Elizabeth Hospital. According to a Hospital Authority spokesman, one of the performers suffered neck injuries and was in a serious condition in intensive care. The other dancer sustained injuries to his head and was listed as stable.

Parents of the severely injured dancer will travel back to Hong Kong from Canada on Saturday, according to Crossroad Community Baptist Church, which urged the public to pray for the couple’s son.

Yeung said authorities had been informed that the family members were returning from overseas, and the government would “spare no effort” in arranging this.

“We have also approached the Health Bureau to communicate with the [family members]. In terms of the exact arrangements, we will make our best efforts to satisfy them, but of course we have certain pandemic requirements,” he said.

“We understand the urgency of the family members. We will try our best to strike a balance.”

Three female audience members, aged 16, 21 and 40, were also treated for shock on Thursday night, with one sent to hospital.

The government ordered the remaining concerts to be suspended until stage sets at the venue were checked and proved to be safe.

MakerVille and Music Nation apologised over the incident and pledged to help the injured dancers and their families. The organisers also confirmed all eight remaining live and online Mirror shows would be cancelled, and announcements on refunds would be made as soon as possible.

Hong Kong Chief Executive John Lee Ka-chiu said in a statement early on Friday he was shocked over the accident and ordered the Culture, Sports and Tourism Bureau, the Leisure and Cultural Services Department and related authorities to thoroughly investigate the case and review safety requirements. – South China Morning Post